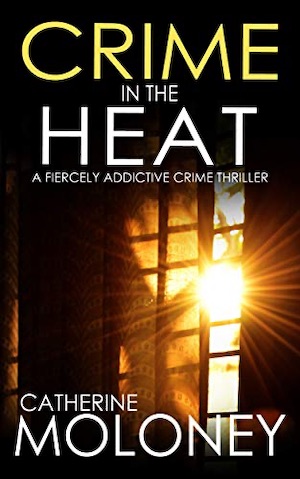 Crime double acts, we all love ’em, from Hercule Poirot and Captain Hastings, Sherlock Holmes and Dr Watson to, in more recent times, Washington Poe and Tilly Bradshaw and Harry Bosch and Renee Ballard. It’s that meeting of minds, yin and yang that creates such a delicious – and sometimes downright dastardly – balancing act.

Let’s add Catherine Moloney’s creations, DI Gilbert ‘Gil’ Markham and DS George Noakes in there, shall we? They work the fictional patch of Bromgrove, and as this is number seven in the series it soon becomes obvious that the little nondescript town bears a striking resemblance to Cabot Cove, of Murder She Wrote fame, in that residents tend to drop like flies.

This time the corpse in question is secondary school teacher Rebecca ‘Bex’ Shawcross, whose strangled body is found stuffed inside the fridge in a busy doctors’ surgery at the local community centre. As Markham and Noakes, alongside fellow team members DS Burton and DC Doyle, try to get a handle on the dead woman they are soon furrowing their brows. On the surface she was a reliable and well-liked member of staff, but as they dig deeper all sorts of seedy revelations come crawling out of the woodwork.

As if that isn’t enough to deal with, soon there’s another suspicious death, the victim once again connected with the community centre. Things are beginning to get out of hand, and with their boss DCI Sidney on the warpath and demanding an immediate result, Markham is feeling the pressure.

There’s much to like about this police procedural with a side order of cosy crime fiction, not least the interplay between the four main protagonists, and Markham and Noakes in particular. Markham is a well groomed, likeable, smart, intuitive and sharp as a knife copper – there’s a touch of the Inspector Lynley about him, while Noakes is a scruffy, irascible old school policeman who is prone to put his foot in it in the most un-PC fashion and isn’t as dim as he at first appears (very Columbo, in fact). They’re an odd pairing but it works, and the interchanges between them are nicely done and will raise a smile or two in the process.

Don’t expect graphic and bloody violence – Moloney’s crimes are small town and lightly played, but that cosy vibe works well in the setting and makes a pleasant change from the rough and tumble of the psychological thrillers which jostle for space on so many bookshelves these days.

Crime in the Heat is a book stuffed to the seams with characters and at times you may need to sit back and sift through the memory banks to recall just who is who. The author also enjoys dropping in an unfamiliar word or two as the tale progresses, so it would pay to have Google on hand if, like me, you need to check exactly what they mean without losing the reading flow too much!

These quibbles aside, this is an ideal book if you’re in the mood for something that isn’t too taxing but will keep you nicely engaged for a while. It may be well on in the series but Crime in the Heat is perfectly readable as a standalone and new readers are given enough back story to keep them in the loop comfortably. I really warmed to Markham and Noakes and enjoyed the chemistry between them. Maybe now is the ideal time to go back through the earlier books before number eight in the series, the ominously titled Crime at Home, arrives?

Cloud stocks are rallying after a punishing start to the year as 2022 outlook brightens
How Tom Holland Skipped The Private Jet Controversy And Made A Sweet Gesture For Zendaya
Fleet Foxes and Blood Orange Cover the Strokes’ “Under Control”: Watch
PM admits cost of living support is not enough – but no new measures announced
‘It looked like it was the worst day of his life’: Who is Salman Rushdie attack suspect?