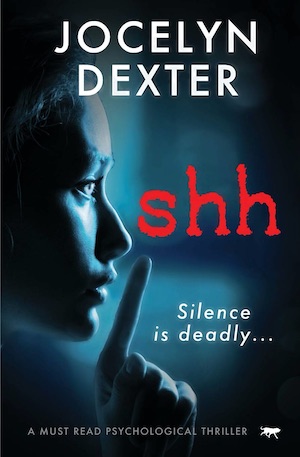 Books with a deaf protagonist are pretty unusual. Two recent ones include Dark Pines by Will Dean and The Silent House by Nell Pattison. Now we’ve got Shh by Jocelyn Dexter – a police procedural and psychological thriller rolled into one neat package.

And it’s gory stuff, with the author setting out her bloodstained stall early doors in a chapter that doesn’t skimp on stomach-churning detail. If graphic violence isn’t your thing then maybe this is not the book for you. In London a hearing impaired teenager has been senselessly battered to death, his body carefully posed in an horrific tableau. It’s the beginning of a nightmarish journey destined to disturb your sleep for some time to come.

Move on a year and another teenager has gone missing. Toby is 15 and deaf, and friend of the family Annie Black, 37 and also profoundly deaf, is among those searching for him. Then she’s assaulted outside her flat. It’s the first salvo in a concerted campaign of terror with Annie at its centre. Because soon Toby is found murdered, his body floating in a rubbish-strewn pond, a skewer sticking out of his left ear… We said it was gory.

And then another of Annie’s friends vanishes without trace. This time it’s William, Annie’s so-called boyfriend (though actually both she and William are gay and trying to hide the fact from the wider deaf community). It’s all becoming too much for a woman who prides herself on being independent and strong.

Annie jumps at the chance to help the police as they fumble their way into the deaf community. She knows it, and the people in it, very well and the officer in charge of the case, DI Crabb, realises her knowledge could be a great asset to the investigation. His boss has a different view – all roads lead to Annie, so why not mark her down as the killer? It’s nonsense of course, but as the stress levels rise, things get even more complicated…

Interspersed between accounts of the faltering police investigation are dark and disturbing chapters written from the point of view of the faceless killer. As things progress, his reasoning becomes more and more deranged. This is a person with serious mental issues, determined to wreak revenge for…. what, exactly?

Author Jocelyn Dexter worked as an interpreter for the deaf for seven years, so she really knows what she’s talking about here. This shows in the depth of detail and sheer authenticity of the world she creates in this debut novel. She’s a skilful plot planner too and, although you might work out the identity of the killer before that final reveal, you can still sit back and admire her thought processes.

The characters are strong and utterly believable, with Annie and Crabb as standouts. I enjoyed the little snippets of information liberally salted throughout the narrative that offer some great insights into the life of a person living with deafness and how they are regarded by the hearing world in general. At times, it isn’t a pretty picture – and if that makes you stop and think, all the better.

There’s a line in this book that stuck with me: “How do you frighten a deaf person? Turn out the light.” Some readers may have been in the dark about the world of the deaf until now, but Shh goes a long way towards illuminating it for us all. It’s good to welcome a new arrival into the crime fiction community and I look forward to seeing what Jocelyn Dexter comes up with next.

Resurrection Bay by Emma Viskic also features a deaf protagonist. For more great debut novels to try, take a look at our picks of 2018.