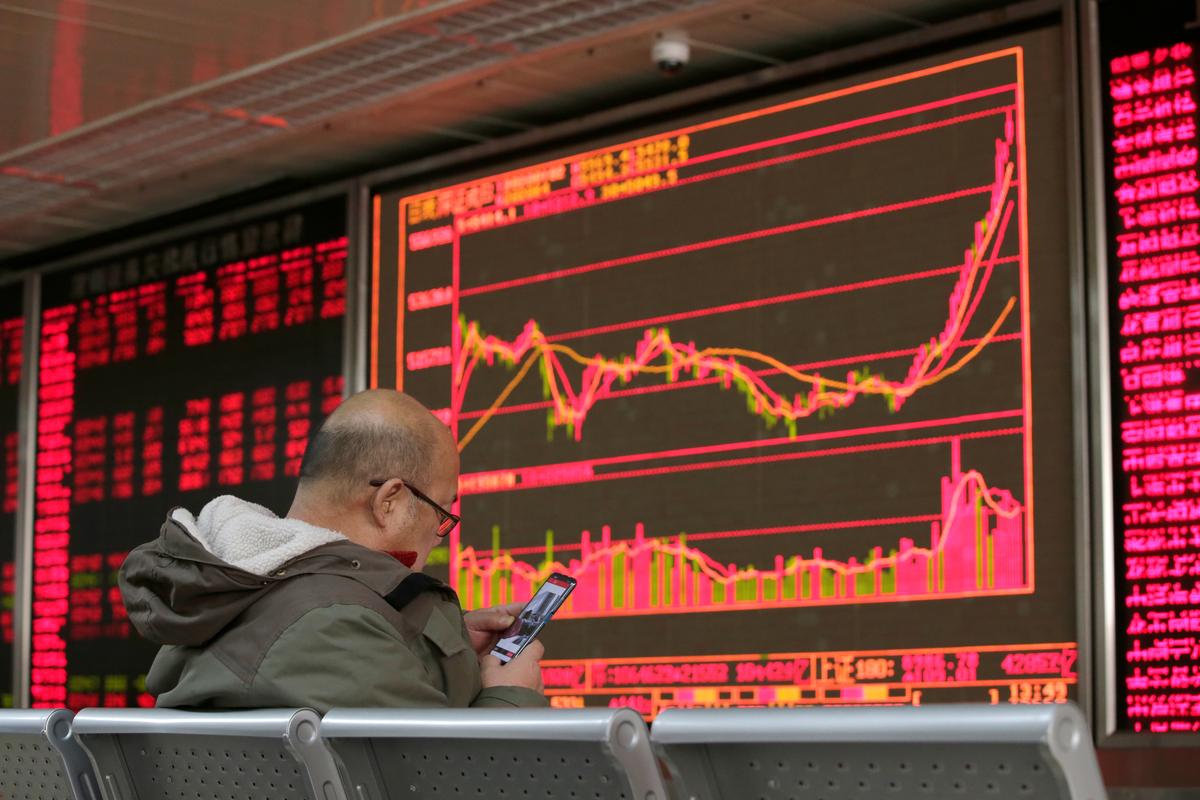 FILE PHOTO: An investor looks at his mobile phone in front of a board showing stock information at a brokerage office in Beijing, China January 2, 2020. REUTERS/Jason Lee

Investors, many facing steep losses due to the pandemic-driven shakeout in assets over the past few months, have also had to contend with renewed U.S.-China trade tensions.

MSCI’s index of global shares was down 0.3%. The pan-European STOXX 600 index slipped 1.6%. Banks acted as the drag after a number of negative updates.

Shares in Deutsche Bank fell 4.4% after it was reported that top managers will waive one month of fixed pay in an effort to cut costs, while fellow German lender Commerzbank and the Netherland’s ABN Amro slumped following first quarter losses.

“Earning season is largely behind us and we have entered the phase two of COVID-19 as deconfinement of economies begins, and that is creating a lot of uncertainties on a daily basis, which is weighing on markets,” said Francois Savary, chief investment officer at Swiss wealth manager Prime Partners.

“We don’t think this is the start of a new correction. Markets went too far, too fast and this is the consolidation.”

Oil markets, which have plummeted this year due to a combination of a collapse in demand and a supply glut, lost further ground.

Leading U.S. infectious disease expert Anthony Fauci on Tuesday warned lawmakers that a premature lifting of lockdowns could lead to additional outbreaks of the deadly coronavirus, which has killed 80,000 Americans and brought the economy to its knees.

Fauci’s comments hammered Wall Street stocks overnight, underlining fragile investor sentiment which has in recent sessions swung between optimism over some easing in lockdowns globally and anxiety about a fresh spike in virus cases.

The mood was further soured by proposed legislation by a leading U.S. Republican senator that would authorize President Donald Trump to impose sanctions on China if it fails to give a full account of events leading to the coronavirus outbreak.

Stock markets have rebounded sharply in recent weeks as the spread of the novel coronavirus slowed in some countries in Asia and Europe, while parts of the U.S. economy and Europe began to reopen after weeks of lockdowns. However, some investors worry that a rush to re-open factories and shops may be premature.

The New Zealand dollar slumped to a six-month low after the country’s central bank doubled its quantitative easing programme and said it has asked commercial banks to be ready for negative interest rates by year’s end.

The U.S. dollar nursed losses as traders braced for Powell’s speech, which will cover economic issues and may offer hints on whether negative rates are a viable policy option.

In Europe, the German 10-year government bond yield, which had risen around 8 basis points since May 4, changed direction and fell around 3 bps as demand for the safe debt increased.

Trump on Tuesday again pushed the Fed to adopt negative rates, a hot topic in financial markets since last week when U.S. money markets started to price in a chance of rates below zero.

Alvvays Share New Video for “Many Mirrors”: Watch
Man behind the Korean wave talks about the future of K-pop and what aspiring artistes can do
Big win for Joe Biden as Democrats land outright majority in the US Senate, NBC News projects
Britney Spears Praises Sister Jamie Lynn in Birthday Post
Tech layoffs send visa holders on frantic search for employment to avoid deportation