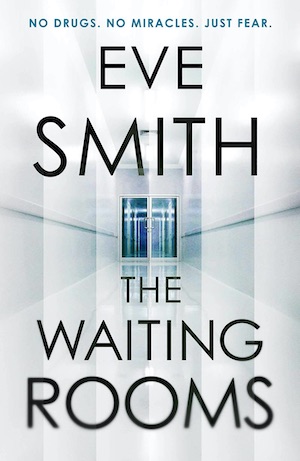 Over the past few months our world has changed in ways most of us could never have anticipated. During the Covid-19 pandemic readers might fall in two categories. There are those who gravitate towards books about disasters and dystopian worlds, and those who avoid them like… well… the plague! I fall into the second category and subsequently I approached The Waiting Room with some trepidation, but also with curiosity since it is set partly in South Africa, my home country.

Eve Smith’s debut portrays a fictitious world resembling our current one in an unsettling way and with such uncanny accuracy that you might wonder if she had a crystal ball at her disposal while writing The Waiting Rooms. Hers is a world where face masks are compulsory, people barely touch each other unless they’re intimate and borders are closed for travel. Sounds familiar, doesn’t it?

The story of this dystopian world and how it came to be is told alternately by three voices – Kate Connelly, Lily and Mary Kate Sommers. Their relationship to each other will reveal itself as secrets are uncovered.

Twenty years after the antibiotic crisis, Kate Connelly has to process the death of her adoptive mother, Pen, and per Pen’s advice decide whether she should search for her biological mother. With minimal information at her disposal she faces an uphill battle, but eventually she learns her name –  Mary Kate Sommers.

During the 1990s Mary is in South Africa doing research for her PhD in botany. This is a time when the threat of tuberculosis is increasing, especially in densely-populated areas such as the townships and it’s rapidly becoming untreatable.

Literally by accident she meets Piet Bekker, a bio prospector searching for plants with medicinal value for the development of new drugs to combat the tuberculosis epidemic. After an initial rough start Mary and Piet form a partnership both professionally and romantically. He needs her expertise in botany to help develop a new generation of drugs and the possibility of this happening in South Africa is likely since 10 per cent of the country’s plants are already used in traditional medicine. She becomes hopelessly infatuated with Piet, a married man with a young daughter.

Together they develop what they thing is a miracle cure for TB and test it on South Africans. Their attempt to do good for humanity doesn’t have the expected positive end result and both Mary and Piet’s lives are irreparably damaged.

Years later Kate Connelly is living in the United Kingdom, a country that has barely recovered from the global antibiotic crisis and is completely changed by it. London is the tuberculosis capital of Western Europe. TB has grown into a global threat and most of the world’s pathogens are resistant to antibiotics due to decades of overuse. Minor infections can no longer be treated and more serious mutations of the flu are common.

Since the over-70s have been using antibiotics for longer, they are the most vulnerable. For this reason they are sent to hospitals called The Waiting Rooms when they become ill to see if they’ll die. Kate Connelly works as a ward sister in one such hospital and occasionally has to act as an ‘angel of death’ for those who would die rather than suffer without treatment. Subsequently her morals are questioned by pro-lifers… and, indeed, herself.

Then there is Lily, 48 days away from her 70th birthday, the cut-off day for treatment. But her past is back to haunt her and she has to face her wrongdoings and regrets. She’s being stalked and threatened in the institution where she lives. In addition to the suspense regarding Lily’s past, her narrative is a harsh reminder of the way we treat the elderly in our communities. Even though her scenario is extreme, often the elderly are ignored even though they still have plenty to offer.

Multiple timelines will keep you on your toes and since no dates are provided it can be tricky to keep track. Fictitious news clippings add an interesting and convincing facet to the storyline and assists in dating the narrative for the reader.

As a South African reader I was possibly overly critical about small details such how the characters are named and I had the odd snigger at some Afrikaans utterances – not because they were wrong, but because I knew what they meant. It’s incredibly easy to fall back into stereotypes of South Africa – seldom is South Africa referred to in fiction without mentioning apartheid and the current hot topic, rhino poaching. Both appear here, but luckily they’re not the main focus. Using South Africa’s abundant plant life and its medicinal uses as core theme is a refreshing change.

If you are hesitant to read about a situation so close to home, don’t be. The Waiting Rooms is thoroughly engaging and it’s clear that an enormous amount of research was done to craft a convincing story. That it’s firmly based in facts ironically makes for a reassuring, albeit eye-opening read.