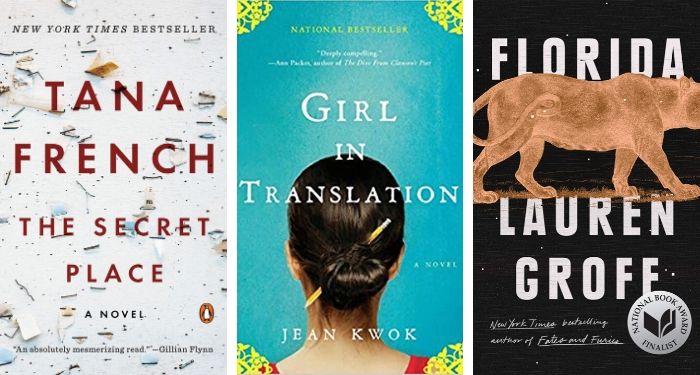 The Beauty of the Moment by Tanaz Bhathena for $2.99

The Tiger at Midnight by Swati Teerdhala for $1.99

Strange Practice by Vivian Shaw for $2.99

I Am Not Your Perfect Mexican Daughter by Erika L. Sánchez for $2.99

Quackery by Lydia Kang and Nate Pederson for $1.99

The Storied Life of A.J. Fikry by Gabrielle Zevin for $1.99

Unfollow by Megan Phelps-Roper for $2.99

A Brief History of Seven Killings by Marlon James for $1.99

Bloodleaf by Crystal Smith for $2.99

The Heartbeat of Wounded Knee by David Treuer for $2.99

A Treacherous Curse by Deanna Raybourn by $2.99

The Magicians by Lev Grossman for $1.99

Behold the Dreamers by Imbolo Mbue for $1.99

Born Standing Up by Steve Martin for $1.99

Aurora Rising by Amie Kaufman and Jay Kristoff for $1.99

A Princess in Theory by Alyssa Cole for $2.99

The Paragon Hotel by Lyndsay Faye for $1.99

A Study in Scarlet Women by Sherry Thomas for $2.99

Jonathan Strange and Mr. Norell by Susanna Clarke for $1.99

The Priory of the Orange Tree by Samantha Shannon for $1.99

The Betel Nut Tree Mystery by Ovidia Yu for $3.99

The Big Over Easy: A Nursery Crime by Jasper Fforde for $4.99

All Systems Red by Martha Wells for $3.99

Fun Home: A Family Tragicomic by Allison Bechdel for $2.99

A Curious Beginning by Deanna Raybourn for $2.99

Dusk or Dark or Dawn or Day by Seanan McGuire for $3.99

One Good Earl Deserves a Lover by Sarah McLean for $3.99

Odd and the Frost Giants by Neil Gaiman for $3.99

Nefertiti by Michelle Moran for $3.99

Instant Pot Obsession: The Ultimate Electric Pressure Cooker Cookbook for Cooking Everything Fast by Janet A. Zimmerman for $2.99

The Duchess War by Courtney Milan for $4.99

Mangos and Mistletoe: A Foodie Holiday Novella by Adriana Herrera for $2.99

Fatality in F (A Gethsemane Brown Mystery Book 4) by Alexia Gordon for $4.99

Reckless by Selena Montgomery for $3.99

Brown Girl in the Ring by Nalo Hopkinson for $5.99

Ten Women by Marcela Serrano for $3.99

The Price of Salt by Patricia Highsmith for $0.99

Ormeshadow by Priya Sharma for $3.99

Sisters of the Vast Black by Lina Rather for $3.99

Serena Williams announces her retirement from tennis
Taylor Swift Files Motion in “Shake It Off” Copyright Lawsuit, Says Lyrics “Were Written Entirely by Me”
Netflix is expanding its push into video games, but few subscribers are playing along
Rocket Debris From Space Launches Have 10 Percent Chance of Injuring Humans by Next Decade, Claims Study
Tips for Designing a Home with Security in Mind