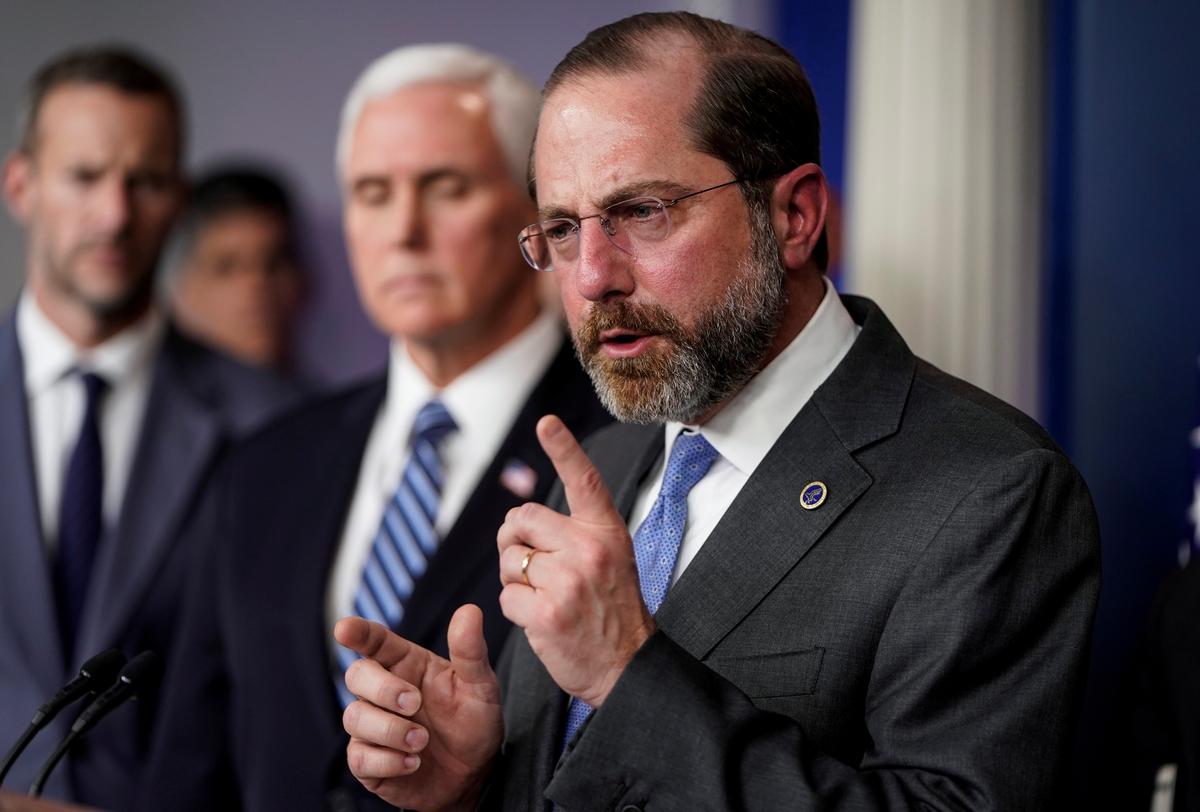 WASHINGTON (Reuters) – U.S. authorities are not yet seeing spikes in coronavirus cases in places that are reopening but it was still to early to determine such trends, health secretary Alex Azar said on Sunday.

FILE PHOTO: U.S. Secretary of Health and Human Services Alex Azar speaks during a news briefing on the administration’s response to the coronavirus at the White House in Washington, U.S., March 15, 2020. REUTERS/Joshua Roberts/File Photo

“We are seeing that in places that are opening, we’re not seeing this spike in cases,” Azar said on CNN’s “State of the Union” program. “We still see spikes in some areas that are, in fact, closed.”

However, Azar said identifying and reporting new cases takes time. A critical part of reopening will be surveillance of flu-like symptoms in the population and other hospital admissions data, as well as testing of asymptomatic individuals, he said.

“It’s still early days,” Azar cautioned in an interview with CBS’ “Face the Nation.” He said data will take some time to come in from states that reopened early such as Georgia and Florida.

Nearly all 50 U.S. states have begun to allow some businesses to reopen and residents to move more freely, but only 14 states have met the federal government’s guidelines for lifting measures aimed at fighting the pandemic, according to a Reuters analysis.

The top Democrat in Congress, House Speaker Nancy Pelosi, said it was impossible to know the trajectory of the virus, which has killed close to 90,000 Americans, without more testing.

“We have no idea the size of this challenge to our country because we have not sufficiently tested,” Pelosi said on CBS’ “Face the Nation.”

Legislation passed by the House of Representatives on Friday would provide for the keys to a successful reopening: testing, tracing and treatment, she said. Republicans have called the bill dead on arrival in the Senate.

“We haven’t had a plan. Let’s go forward in a bipartisan way to have a plan, a plan to test,” she said.

The United States has lagged far behind most other industrialized nations in coronavirus testing that public health officials deem critical to preventing further outbreaks.

Azar put the onus on local governments to handle reopening plans, as cooped-up Americans begin to flock to bars, beaches and parks.

“These are very localized determinations. There should not be a one size fits all to reopening but reopen we must because it’s not health versus the economy. It’s health versus healthy,” he said, adding there were serious health consequences to not reopening.

Asked about images being broadcast from some areas of the country showing people gathering near bars and congregating close together, Azar said that was the cost of freedom.

“I think in any individual instance you’re going to see people doing things that are irresponsible. That’s part of the freedom that we have here in America,” he said on CNN.