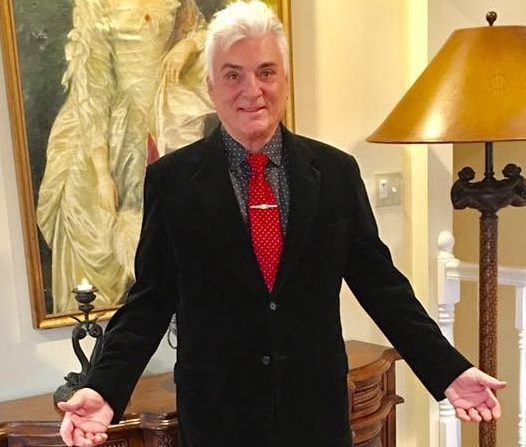 Ron Russell is an expert in the Golden Era of Hollywood, an actor, tv host, producer and writer who has worked in Hollywood for over 60 years, sharing the screen with Hollywood Legends Sophia Loren and Tab Hunter. Ron Russell has a history with his Time Warner TV Show “Set The Record Straight”, where he interviewed Hollywood Legends like Lauren Bacall, Elizabeth Taylor, Tony Curtis, Bette Davis, John Waters, Renee Taylor, Joe Bologna, Jane Russell, Tab Hunter, Cliff Robertson, Arlene Dahl, Tippi Hedron, Cloris Leachman, etc….He is also the co-host of The Jimmy Star Show with Ron Russell, the #1 Webshow in the world with 4.5 million weekly viewers/listeners.

Chance Spiessbach is an Entertainment Journalist, Host and Television Personality. Endearing, witty, unarguably funny, Chance is one of the most industrious people in show business. Chance has won the hearts of millions from both the celebrities he interviews to the fans who eagerly await to view his coverage. Spiessbach is a force both on-and-off camera. He is a true result of hard work and determination and serves as inspiration to people.

He has successfully interviewed a vast roster ranging from Deepak Chopra to Kim Kardashian, to Ice T, and corporate titans like Dick Parsons. He managed to turn his gift for gab into one-on-one interactions with stars such as Sean Penn, Mel Gibson and Madonna. They enjoyed his interviews so much they literally had to be pulled away!

Manifesting his great entrepreneurial spirit, Chance created his own show Chance TV, where he can be seen on Hollywood’s most exclusive Events, Red Carpets, Green Rooms, Backstage and On-Set. Chance is a master interviewer and is just as comfortable one-on-one as he is in front of a room filled with A-Listers and influencers. With his incredible ability to move a crowd he was chosen to host the Georgio Gucci Gala honoring and marking the first time in over 25 years Mr.Gucci visited the US.
Chance is a unique, easy going and versatile interviewer who is comfortable in any situation he finds himself in. With celebrities he always finds a way to get them to open up since he realizes icons are people too and as Chance says “I interview the person not the celebrity.” The most memorable interview of his career was interviewing Art Ford, Whitney Houston’s producer of 30 years and him receiving the text of Whitney Houston’s death. Chance was the last person to interview James Gandolfini before his passing.

The official website for Chance TV may be found at https://www.ChanceTelevision.com