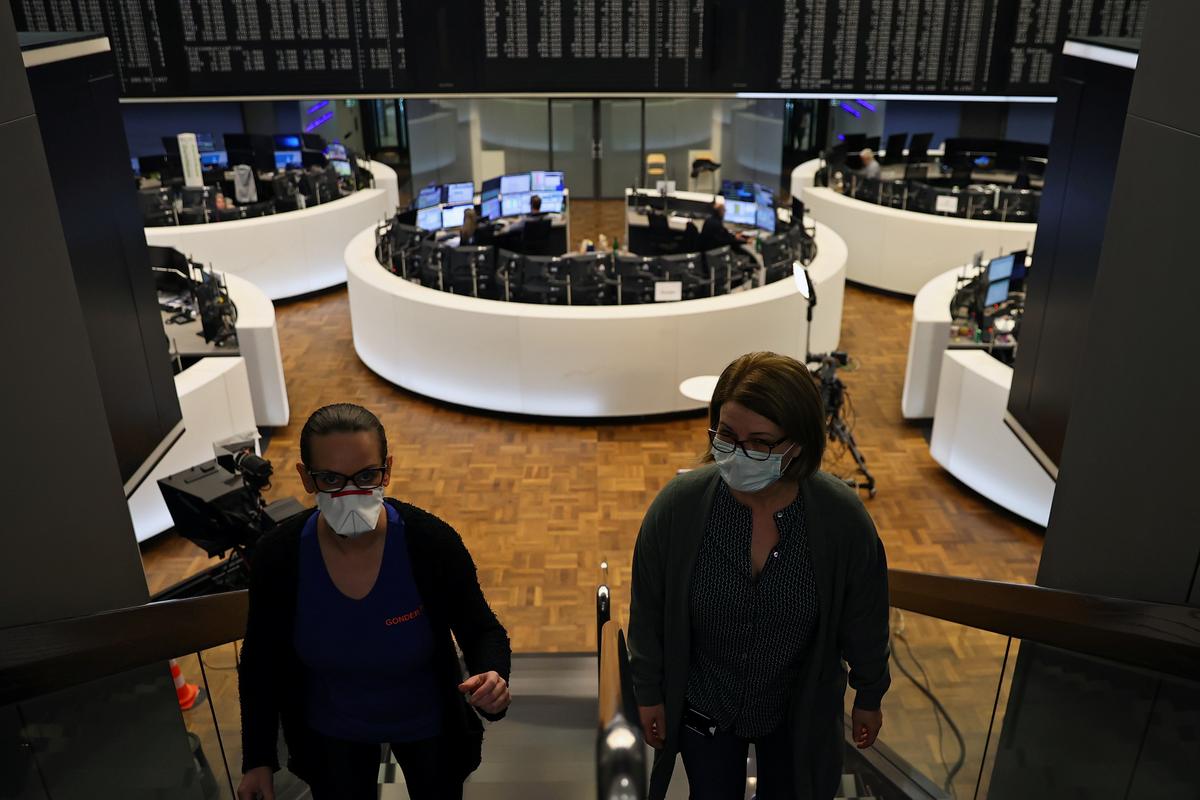 LONDON (Reuters) – European stock markets rose on Monday and oil prices climbed to their highest in as much as two months as a loosening of coronavirus shutdowns boosted market sentiment, even though the deadly outbreak has yet to be fully contained.

Warm weather enticed much of the world to emerge from coronavirus lockdowns as centres of the outbreak from New York to Italy and Spain gradually lift restrictions that have kept millions cooped up for months.

However, the weekend also saw anti-lockdown protesters in countries such as the United States, Germany, England and Poland arguing government restrictions demolish personal liberties and are wrecking economies.

The pan-European STOXX 600 was up 2% at 1020 GMT, with heavyweight bourses in Britain .FTSE, Germany .GDAXI and France .FCHI all comfortably in positive territory, recovering some of last week’s losses.

“The resilience of stock markets relative to the awful economic data that we’ve been seeing over the past fortnight speaks to an optimism that… as economies come out of lockdown we can expect to see improvements as we head into the second half of the year,” said Michael Hewson, chief market analyst at CMC Markets.

Governments must balance the economic incentive to re-open businesses with the risk of triggering a deadly second wave of the virus, which has killed more than 312,000 people and spread to at least 210 countries since December. [nL4N2AY3AS]

Deutsche Bank strategist Jim Reid said, “It does feel like we’re in the middle of a phoney war at the moment with all of us waiting to see how efficiently the various economies are able to re-open given all the social distancing that will be required.”

There were still lots of obstacles to a rapid recovery, with Federal Reserve Chairman Jerome Powell saying in an interview on Sunday that a U.S. economic recovery may stretch deep into 2021.

The most important data for the U.S. economy now are the “medical metrics” around the coronavirus pandemic, he said.

Health ministers from around the world, including China and the U.S., are expected to call for an independent evaluation of the World Health Organization’s handling of the COVID-19 pandemic during a WHO meeting on Monday.

U.S. lawmakers and officials are crafting proposals to push American companies to move operations or key suppliers out of China, including tax breaks, new rules, and carefully structured subsidies.

Japan’s preliminary GDP data showed that the world’s third biggest economy contracted an annualised 3.4% in the first quarter, slipping into a recession for the first time in more than five years. [nL4N2CX16Y]

But hopes of a worldwide economic recovery saw oil prices climb by more than $1 a barrel on Monday, supported by output cuts.

In commodity markets, the flood of liquidity from central banks, combined with record-low interest rates and poor economic data from the U.S., lifted gold to a seven-year peak. The metal was last up 1.3% at $1,763 an ounce XAU=, with silver and palladium also boosted. [GOL/]

The MSCI world equity index .MIWD00000PUS, which tracks shares in 49 countries, was up around 0.4% while MSCI’s main European Index .MSER was up 2%.

Government bond yields edged higher across the euro area, while France’s bonds saw some underperformance after its ratings outlook was lowered by Fitch Ratings.

Europe’s biggest budget airline, Ryanair, reported a 13% rise in profit for the year to March 31 (RYA.I), but cut its annual passenger traffic target by a further 20% and said it had “no visibility” on customer demand once it reopens much of its network on July 1. Ryanair shares were last up 10.4%.

The dollar fell slightly against a basket of six major currencies in early London trading before recovering somewhat, last down less than 0.1% since New York’s close .DXY.

The Norwegian crown was lifted by the rising oil prices, up around 0.8% versus the euro EURNOK=D3.

Sterling fell below $1.21 – its lowest since March 26 – late on Sunday after the Bank of England’s chief economist said the bank is looking more urgently at options such as negative interest rates.

Video shows chaotic moments after Salman Rushdie attack – as suspect is charged with attempted murder
How Tom Holland Skipped The Private Jet Controversy And Made A Sweet Gesture For Zendaya
L.A. Shelter Frustrated by Kanye, Please Deliver What You Promised
Amanda Seyfried Opens Up About The Pressure Of Nude Scenes As A Young Actress In Hollywood And Why She Feels More Respected Now
US attorney general says he personally approved FBI search of Trump’s Mar-a-Lago home