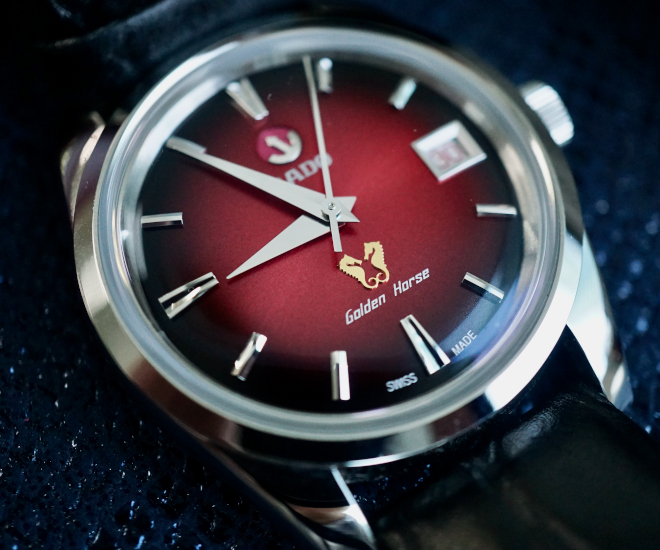 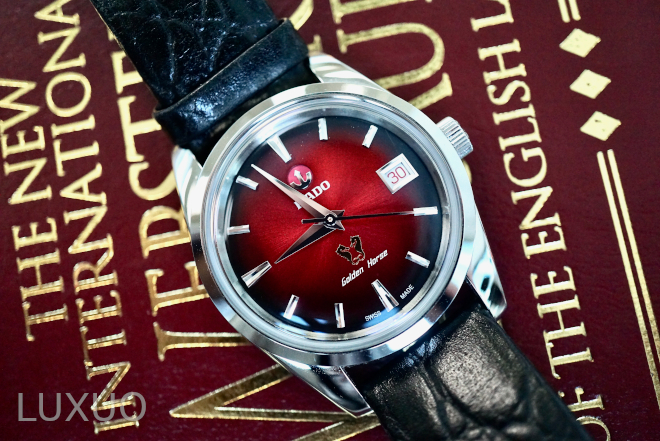 Founded in 1917 but branded Rado in 1954, the Lengnau Swiss watchmaker eventually became a pioneer in the use of high tech materials like ceramic and lanthanum, that eventually, the vagaries of “brand positioning” in order to improve their complementarity amongst Swatch Group brands meant that Rado began to focusing more on modernist watchmaking aesthetics and less on its more classically designed references. Hence, when Rado released heritage editions of its Golden Horse and the Captain Cook, it prompted a rare soul searching of deeply held perspectives on what each brand stood for among the community of watch connoisseurs.

In the Swiss watch industry, brand perceptions rarely waver. Built over the course of a century or more, marketing communications tend to lean heavily on a continuous lineage which can trace the ancestry of a modern release. However, with Rado, when the futuristic references are all you know, the rediscovery of the legacy of the Lengnau brand can be exhilarating if not outright surprising, as a result the limited-edition Rado Golden Horse 1957 is a vaunted symbol of the untapped potential of the brand. 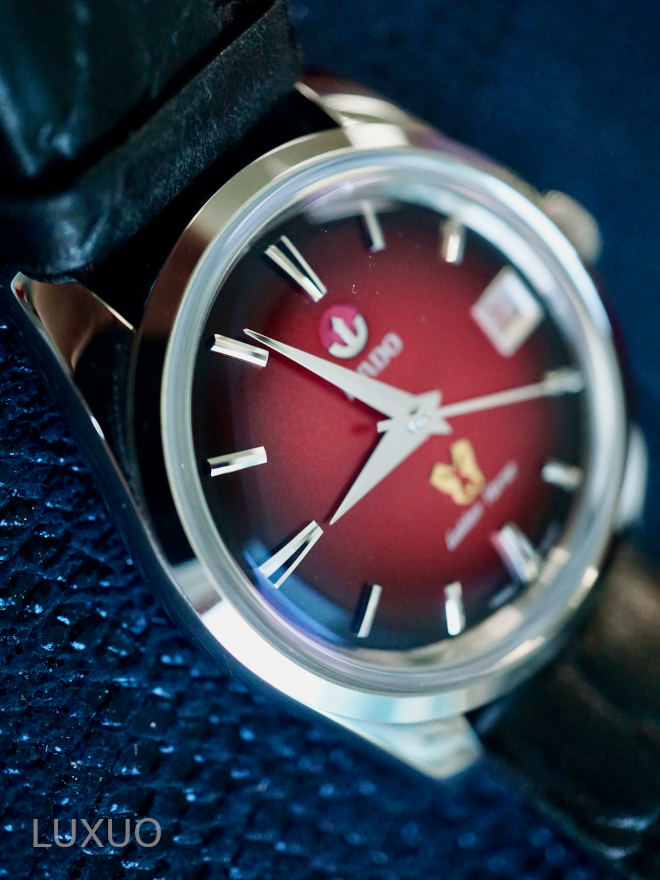 An original design before they became synonymous with its high-tech ceramic cases and bracelets, the dressy Rado Golden Horse 1957 and its hard-wearing, sporty diver’s watch Captain Cook, encapsulate the zeitgeist of late 50s-early 60s designs. From smokey dials to domed sapphire crystals which mimic the appearance of vintage Hesalite, the Rado Golden Horse 1957 complements the brand’s contemporary with a promise akin to see your beloved classic Jaguar E-Type with a hybridised electric engine.

Indeed, the new Rado Golden Horse 1957 limited edition carries on its face: vintage aesthetics but underneath its striking fume or smoked dial and highly polished faceted indexes and classic sword hands, beats a thoroughly advanced piece of micro-engineering with 80 hours power reserve. Remarkably, it’s not the technical movement with silicon escapement which truly makes the Golden Horse 1957 such a winning Rado novelty: it is really the vintage aesthetics executed so similarly and with such high attention to details – think Grand Seiko or H. Moser, that without a loupe, many of the finishing is executed in a manner which – dare we say – approaches the levels of fine watchmaking techniques. 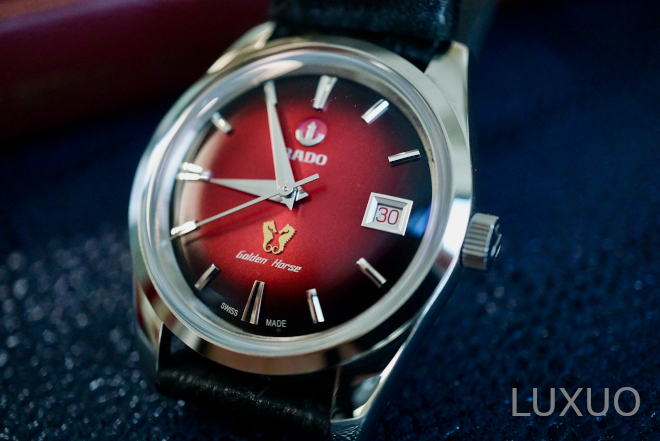 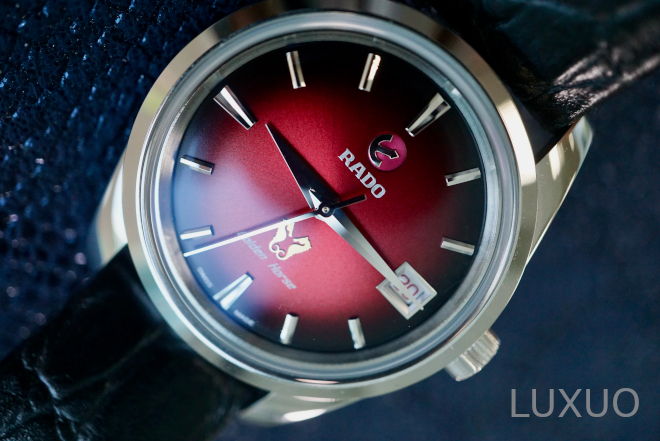 Take for example, the date complication: rather than merely adopt it as a “necessary evil because consumers want their watches to be able to tell the date as well”, Rado leaned into the complication by creating a framed window at 3 o’clock – this demarcates intent rather than tacit acknowledgment that “we didn’t want the date there but its you the buyer who really wants it” – and Rado polished the heck of out of it too – which means that every element on the new Rado Golden Horse 1957 limited edition is there with purpose rather than an after-thought. 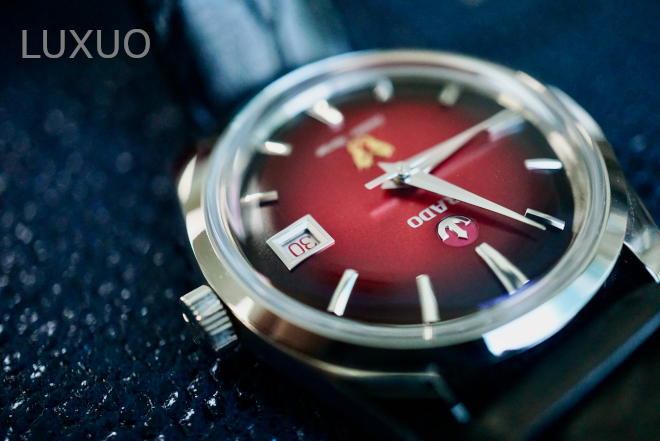 The re-introduction of the oscillating anchor rotor at 12 o’clock is also a brilliant touch. At the re-opening of a Rado boutique late last year, I managed to catch up with CEO Matthias Breschan who mentioned that in the good old days, when the anchor had stopped rotating, it was usually a good indication that the seals in the watch had weakened and somehow some moisture or atmospheric debris had crept in and jammed the sensitive feature: It’s a remarkably innovation to a very pressing difficult question which us watch collectors often ask ourselves – a timepiece is not like a car and given the amounts of time a servicing typically takes, regular service intervals is not a thing which is as commonly adopted as the brands might like. In essence, the rotating anchor motif on a heritage reissue like the Rado Golden Horse 1957 harkens back to an age where there were just less worries and more enjoyment of what things are rather than what could be.

Gorgeous and classically proportioned, the 37mm Golden Horse 1957 is only 10.8mm thin but it is by no means diminutive. Via visual illusion of smoked dial and elongated lugs, there’s a comfortable elegance which allows a dressy timepiece of this nature to communicate ‘wrist presence’ without overwhelming your wrist or departing from the vintage feel that Rado has re-created. This 2019 model differs from the 2020 edition with only an extra US$100 between the for the “beaded rice” bracelet but honestly, I feel that something which is only 50 meters water resistant should play to its strengths as a formal timepiece rather than dip its toes into the deeper waters which its Captain Cook cousin plays in, with a beaded bracelet. However, the rice beads bracelet is beautifully designed and plays up its old school desirability.