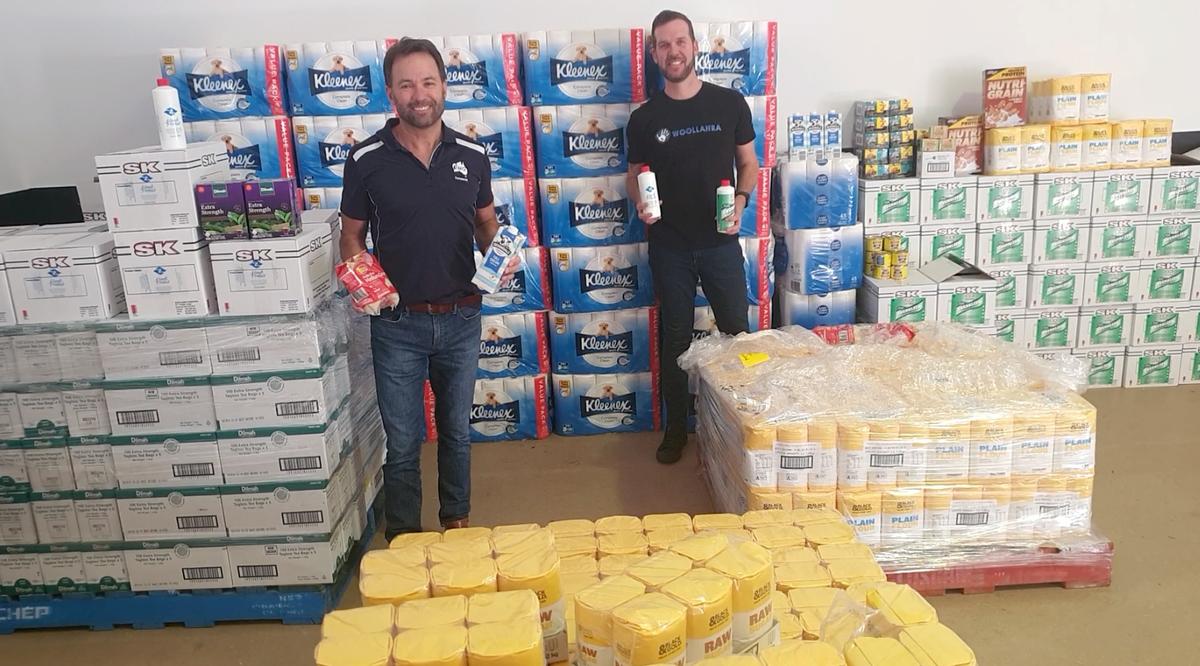 MELBOURNE (Reuters) – Big mining companies that rely on indigenous workforces or operate near remote communities have acted fast to curb the spread of the coronavirus and avoid a public health crisis that could damage their reputations.

Heath Nelson of Fortescue Metals Group and Chris Schmid of Woollahra Group pose by goods, which are ready to be packed and delivered to help remote Aboriginal communities during the coronavirus disease (COVID-19) outbreak, in Perth, Western Australia April 10, 2020. Fortescue/Handout via REUTERS

From Australia’s outback to Canada’s Arctic wilderness to the Andes, mining firms have changed rosters to stop outsiders infecting remote communities, paid staff with potential health issues to stay at home and given food to indigenous families so they don’t have to shop in nearby mining towns.

Investors already weighing up holdings in miners because of their contribution to climate change say a bad outbreak of COVID-19 among indigenous communities near mining operations might also make them reassess their investment decisions.

Norway’s $1 trillion wealth fund blacklisted some of the world’s biggest miners last week over their carbon emissions and EY has ranked miners’ social licence to operate as the greatest risk to the industry for the past two years.

In Australia, mining companies are one of the biggest employers of Aboriginal people, who have an average life span nearly 10 years shorter than other Australians and can be at elevated risks of heart and kidney diseases and diabetes.

Mining companies typically fly staff from big cities to work in remote areas in a practice known as FIFO, or fly in fly out.

South32 (S32.AX) said it had strictly separated FIFO staff at its manganese mine GEMCO in north Australia from residential workers who are interwoven with the local Anindilyakwa people on Groote Eylandt – and expects to keep the measures in place for months.

“We work in close proximity to several indigenous communities who have vulnerable people. It’s absolutely essential we get it right,” said Jo-Anne Scarini, vice president of operations at the mine.

Australia, which is among the countries most successful in fighting the spread of COVID-19, had just over 7,000 cases as of May 18 and 99 deaths. It does not separate out data for cases among Indigenous people, who make up 3.3% of the population.

Because of the risk to people with underlying health issues, Australian mining giant BHP BHP.L (BHP.AX) made all employees over 65 work from home but lowered that to 50 for higher-risk employees such as Aboriginal and Torres Strait Islanders – and asked all its contractors to do the same.

“(We) are actively encouraging them to take the steps we are taking to support our own high-risk employees during the COVID-19 pandemic,” BHP said in a statement.

Rival Rio Tinto (RIO.L) has adopted a similar policy and is also administering antibody blood tests and temperature checks before staff fly to remote sites to reduce the risk of anyone infecting the mainly indigenous communities near mines.

Australian iron ore miner Fortescue (FMG.AX) assesses its workers’ health on a case by case basis, rather than focusing on groups within its workforce, Chief Executive Elizabeth Gaines told Reuters, adding that it had distributed care packages including items such as hand sanitisers to remote communities.

In the Arctic Canadian territory of Nunavut, a predominately indigenous region mostly made up of Inuit, miners slowed their operations to limit the risk of an outbreak.

Gold miner Agnico Eagle (AEM.N), Nunavut’s largest private employer, initially sent home its First Nations employees, who make up about a fifth of its 2,500-strong workforce, before scaling back operations and halting exploration.

It also instituted onsite testing and screening for COVID-19, as well as teleworking for all positions at its three Nunavut sites that could be done remotely, the company’s communications director Dale Coffin said.

In Peru, MMG Ltd (1208.HK) has given food and care packages to 6,000 families in the Apurimac region around its vast Las Bambas copper mine in the Andes to discourage them from going to town for provisions and potentially exposing the community.

A spokeswoman for the Australian-based miner said there were no confirmed cases of coronavirus at Las Bambas as yet.

There has been an outbreak, however, at Peru’s Antamina mine which is owned by BHP and commodities trading giant Glencore (GLEN.L). More than 200 cases were discovered in April during testing of staff and contractors and mining has been halted.

Environmental, social and governance (ESG) investment analysts say they are watching mining companies closely to see how they cope with the coronavirus crisis, mindful of the potential risks to their reputations.

“In case of a major outbreak, we would carry out an assessment of both its financial and social impacts and factor that into our investment decisions,” he said.

“It is true that the ‘brand’ of mining has suffered in recent years,” he said. “When we talk about safety these days we talk about zero harm so it does go beyond ‘accidents’ to thinking about health and wellbeing.”

In Canada, Ojibway Chief Duncan Michano of the Pic River First Nation said Barrick Gold (ABX.TO) continued to pay workers at its Hemlo mine after the First Nation locked down its Ontario community for several weeks in April to protect it from the pandemic.

But community members who lived off the reserve and worked at the mine were upset not to be offered the same option to stay home without losing pay, he said.

They were mollified by the protective measures Barrick implemented, he said, calling the whole situation a compromise.

“We tried to close (the mine) down altogether but we don’t have any legal means to do that,” Michano said. “The province declares it an essential service so they can do what they want.”

For some indigenous workers, stopping work is not an option. The Tahltan First Nation in Canada’s British Columbia province opted to work with Australia’s Newcrest Mining (NCM.AX) to keep the Red Chris copper-gold mine open, said Chad Day,president of the Tahltan central government.

There were fears a shutdown would throw 120 locals out of work, exacerbating social problems, Day said. “It wasn’t an easy decision.”