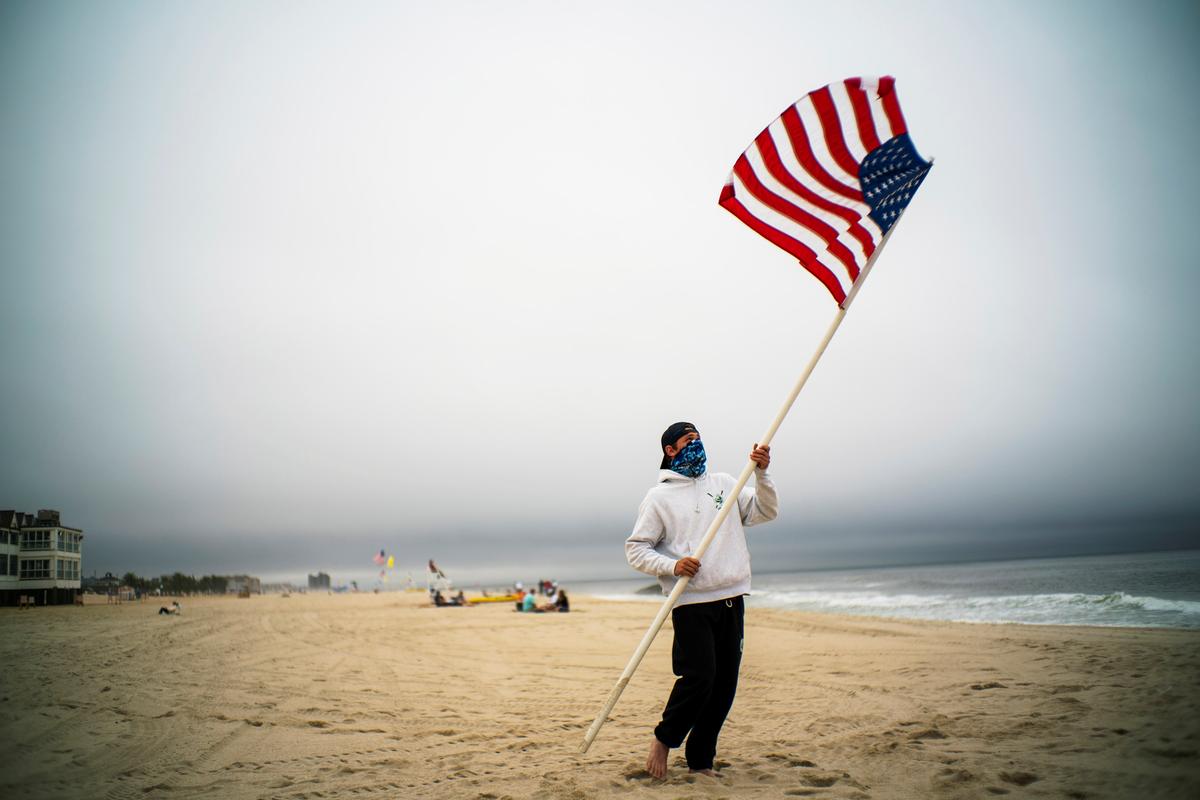 NEW YORK (Reuters) – Americans excited about what for many was their first big break from coronavirus shutdowns flocked to beaches and outdoor areas on Saturday, snarling roadways and forcing some closures on the Memorial Day weekend that signals the start of the U.S. summer.

A beach guard removes the U.S. flag of his spot after a day of duty at Long Branch beach after New Jersey beaches were opened ahead of the Memorial Day weekend following the outbreak of the coronavirus disease (COVID-19) in Long Branch, New Jersey, U.S., May 23, 2020. REUTERS/Eduardo Munoz

In Destin, Florida, The Back Porch, a surfside restaurant on Henderson Beach, was full. The restaurant was operating at 50% seating capacity to ensure that chairs and umbrellas could be placed 6 feet apart, and newcomers had to wait for places to become free before they could enter, said hostess Julianna Preede, 18.

In Arizona, holiday travelers flooded Interstate-17, causing a 15-mile backup on the roadway used for access to some of the desert’s most beautiful canyons, the Arizona Department of Transportation said.

Some recreation areas, including Saguaro Lake, became so crowded that authorities had to shut them down.

While the Memorial Day holiday that honors the U.S. military dead is on Monday, the weekend leading up to it marks the unofficial start of summer, with Americans traditionally flocking to beaches, gathering at backyard barbecues and unfurling picnic blankets in parks.

Among those soaking in the sun and enjoying a bit of travel on Saturday was President Donald Trump, who was seen golfing at his Trump National club in northern Virginia, his first golf outing since the White House declared a national emergency over the coronavirus outbreak in March.

Trump has been eager to promote the idea that the United States is returning to normal.

Arlington National Cemetery, which holds veterans of U.S. conflicts including the Civil War, remained open only to family pass holders who must have a face covering to enter. Access was granted to visit gravesites only, with no touring allowed.

In rain-soaked New York, epicenter of the coronavirus crisis, New York Governor Andrew Cuomo at his news briefing on Saturday discussed his decision to allow up to 10 people to attend ceremonies honoring America’s military veterans, warning that social distancing and face masks should be part of any plans to get together.

Heavy downpours kept crowds down at state beaches in New York, New Jersey and Connecticut, which were re-opened with governors urging people to stay at least 6 feet apart, the recommended distance to help stop the spread of the novel coronavirus.

Surprise openings of other outdoor sites thrilled Americans cooped up at home by pandemic lockdown rules.

The U.S. death toll from COVID-19, the disease caused by the coronavirus, continues to rise and is expected to surpass 100,000 in the coming days, the highest number of any country.

Iowa had a record increase in deaths on Saturday, as did Minnesota and Rhode Island earlier this week, according to a Reuters tally.

Why has the FBI raided Trump’s estate – and what are they investigating?
Jeanneau’s New Family-friendly Flagship
Peloton slashing 780 jobs, closing stores and hiking prices in push to turn profit
Stacey Toy and Gil Laureiro Guest On Hit TV Show Soho At Night In NYC
‘It looked like it was the worst day of his life’: Who is Salman Rushdie attack suspect?