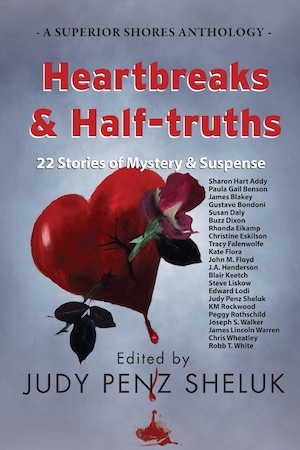 Edited by Judy Penz Sheluk — A memorable collection! If you like short crime fiction with the impact of a shiv’s thrust or the attention-grab of a loaded .38, this collection is right up your dark alley. Yes, there’s heartbreak, and those half-truths will get you every time.

There are familiar names here, like Kate Flora, John M Floyd, Steve Liskow, and KM Rockwood, and you’ll make the acquaintance of talented new authors too. Based in Canada, Judy Penz Sheluk has done a good job attracting 22 skilled short story authors from around the world, for the second anthology from Superior Shores Press. The collection includes tales from Canada, the UK, Australia, Germany, Argentina, and the US. Seventeen of them are brand new.

Rather than say a little about each of the stories, which can make for a tedious read, I’ll note a couple of themes that emerge from the collection. Several stories refrain from spelling out exactly what happened, trusting the reader’s perception (or diabolical nature) to do the work. I’m a big fan of letting readers apply their intelligence to a set of facts, so I particularly enjoyed those stories. Steve Liskow’s Ugly Fat is a perfect example – funny, teasing, full of clever lines, and just deserts for the hapless philanderer. Sample line: ‘My gym bag huddles on the passenger seat like a sleeping dog.’ And, as a reader, you’ll see the catastrophic mistake that Roger, the protagonist of KM Rockwood’s Burning Desire, is making long before he does.

As noted above, the romantic triple-cross is a frequent theme, one that blooms feverishly in several stories here, including in Joseph S Walker’s Pink Hearts Pierced by Arrows and James Lincoln Warren’s The Short Answer. I laughed out loud when I realised Warren’s protagonist, PI Steven O Sheridan, had the nickname Mayday. In James Blakey’s The Greatest Secret, a crime boss hires a PI to find the man his wife is running around with. Not much of a challenge; all our guy needs to do is look in the mirror. But what to tell the mobman? Good to wear your seatbelt for these tales.

Several of the stories benefit from a strong sense of place. Sheluk’s own Goulaigans, set on the Goulais River north of Sault Ste Marie, Ontario, where the chilly water and the deep woods add to the atmosphere, with a lesson in Canadian pronunciation thrown in. Alaska’s unforgiving winter is an quiet accomplice to murder in Peggy Rothschild’s The Devil’s Club.

Finally, I’d mention the entertaining Hollywood insider voice that author Buzz Dixon uses in his story Tongor of the Elephants, a low-budget jungle serial that for good and sufficient reason never saw the light of day. It grabs you from the first line: ‘Here lemme show you something you’ve never seen before.’ And will see very clearly, thanks to Dixon’s vivid writing.

This is just a sampling of the heartbreaks and half-truths awaiting you in this noteworthy collection.

Like short stories? Try these by Lawrence Block or this collection from Barcelona’s Teresa Solana.