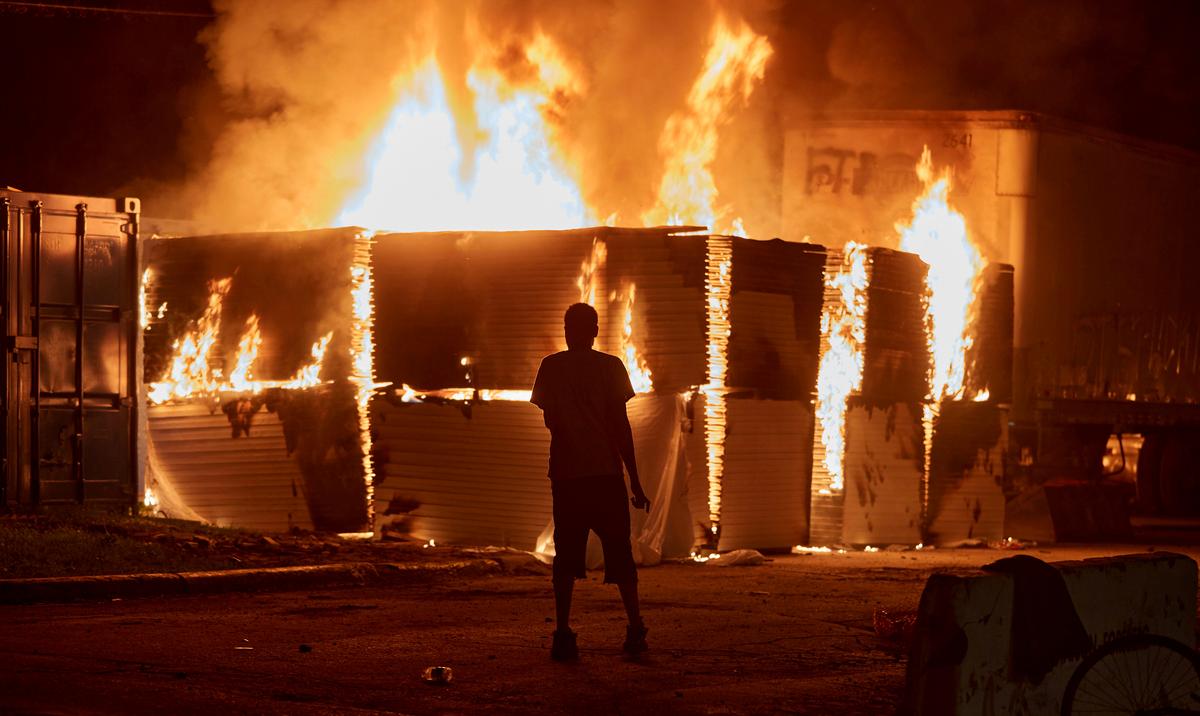 MINNEAPOLIS (Reuters) – Minnesota’s governor activated the National Guard on Thursday to help restore order following two days of violent protests in Minneapolis over the death of a black man seen in graphic video gasping for breath as a white officer knelt on his neck.

Four city police officers involved in the incident, including the one shown pressing his knee into Floyd’s neck as he lay on the ground, were fired from their jobs the next day.

At a morning news briefing, Police Chief Medaria Arradondo apologized to Floyd’s family, conceding his department had contributed to a “deficit of hope” in Minnesota’s largest city even before Floyd’s deadly encounter with police.

“I am absolutely sorry for the pain, devastation and the trauma that Mr. Floyd’s death has left on his family, his loved ones and our community,” he said.

“Give us the time to do this right, and we will bring you justice, I promise you,” Hennepin County Attorney Mike Freeman told reporters. He acknowledged the policeman’s conduct depicted in the video was “horrible,” but said, “My job is to prove that he has violated a criminal statute.”

Freeman said his office had also reached out to veteran civil rights activist Jesse Jackson for help in conveying the message that law enforcement takes the case seriously.

The investigation, which Attorney General William Barr had designated a “top priority,” will focus on whether the arresting officers used the “color of law” to deprive Floyd of his civil rights, a federal crime, she said.

The announcement capped two days of unrest in which riot police firing tear gas and rubber bullets clashed with rock-throwing protesters who filled the streets in an outpouring of rage over Floyd’s death.

Floyd, a Houston native known affectionately to friends as “Big Floyd” and who had worked as a nightclub security staffer, was reportedly suspected of trying to pass counterfeit money when police took him into custody.

Protesters gather to watch an apartment building burning near the Minneapolis Police third precinct after a white police officer was caught on a bystander’s video pressing his knee into the neck of African-American man George Floyd, who later died at a hospital, in Minneapolis, Minnesota, U.S., May 27, 2020. Picture taken May 27, 2020. REUTERS/Adam Bettcher

An onlooker’s video of the arrest showed Floyd lying face down on the street, gasping for air and repeatedly groaning for help as he pleaded, “Please, I can’t breathe.” The officer pinned Floyd’s neck to the ground for about eight minutes, until he grew still. He was pronounced dead at a hospital a short time later.

A second night of disturbances on Wednesday, punctuated by looting, vandalism and arson, began hours after Mayor Jacob Frey urged local prosecutors to file criminal charges in the case.

Most protesters had been peaceful, while a core group engaged in unruly behavior, the police chief said.

The Floyd case was reminiscent of the 2014 killing of Eric Garner, an unarmed black man in New York City who died after being put in a banned police chokehold.