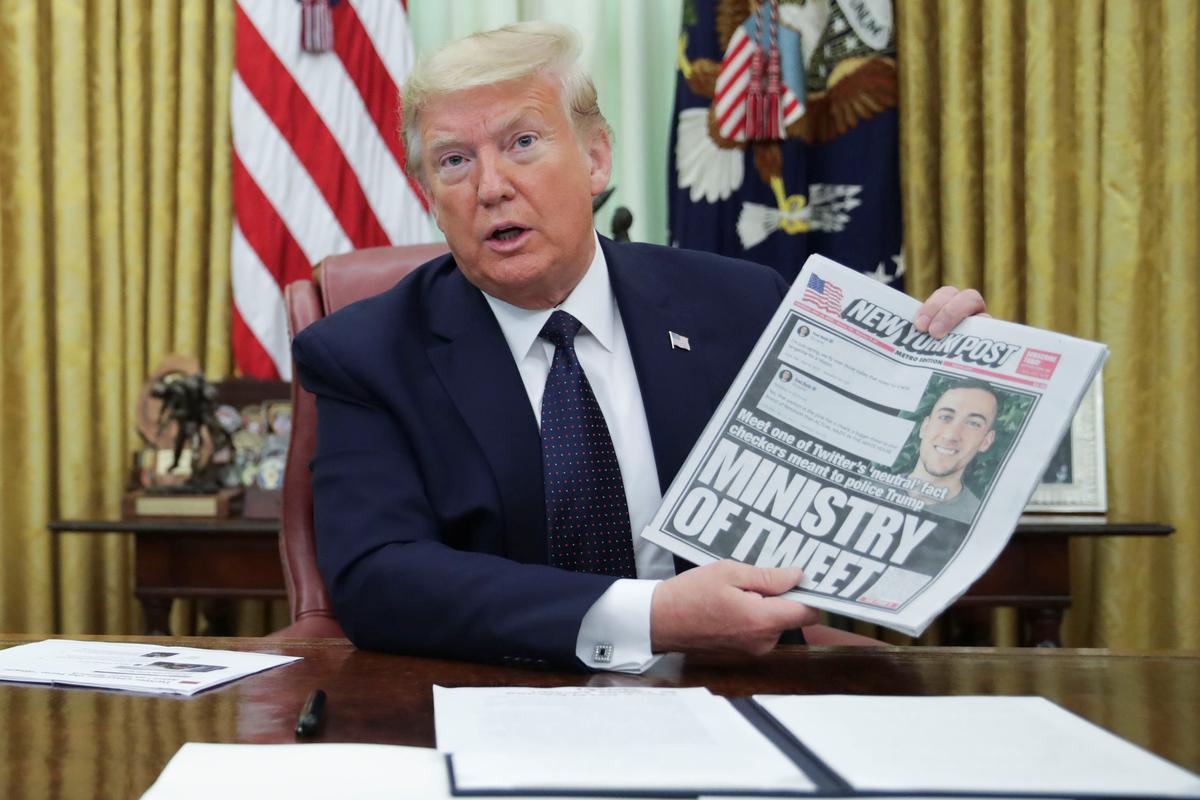 WASHINGTON (Reuters) – President Donald Trump said he will introduce legislation that may scrap or weaken a law that has protected internet companies, including Twitter and Facebook, in an extraordinary attempt to intervene in the media.

Trump signed an executive order on Thursday afternoon after attacking Twitter for tagging his tweets for the first time about unsubstantiated claims of fraud about mail-in voting with a warning prompting readers to fact-check the posts.

In addition, Trump said his administration may “remove or change” a provision of a law known as section 230 that shields social media companies from liability for content posted by their users.

On Wednesday, Reuters reported the White House’s plan to modify Section 230 based on a copy of a draft executive order that experts said was unlikely to survive legal scrutiny.

“What I think we can say is we’re going to regulate it,” Trump said at the signing of the order.

“I’ve been called by Democrats that want to do this, so I think you could possibly have a bipartisan situation,” said Republican Trump, who is running for re-election in the Nov. 3 vote.

Trump’s remarks and the draft order, as written, attempts to circumvent Congress and the courts in directing changes to long-established interpretations of Section 230. It represents his latest attempt to use the tools of the presidency to force private companies to change policies that he believes are not favorable to him.

“In terms of presidential efforts to limit critical commentary about themselves, I think one would have to go back to the Sedition Act of 1798 – which made it illegal to say false things about the president and certain other public officials – to find an attack supposedly rooted in law by a president on any entity which comments or prints comments about public issues and public people,” said First Amendment lawyer Floyd Abrams.

U.S. President Donald Trump holds up a front page of the New York Post as he speaks to reporters while he signing an executive order on social media companies in the Oval Office of the White House in Washington, U.S., May 28, 2020. REUTERS/Jonathan Ernst

Others like Jack Balkin, a Yale University constitutional law professor said “The president is trying to frighten, coerce, scare, cajole social media companies to leave him alone and not do what Twitter has just done to him.”

Twitter’s shares were down 4.4% on Thursday. Facebook was down 1.7 percent and Google parent Alphabet Inc was up slightly.

Trump, who uses Twitter virtually every day to promote his policies and insult his opponents, has long claimed without evidence that the site is biased in favor of Democrats. He and his supporters have leveled the same unsubstantiated charges against Facebook, which Trump’s presidential campaign uses heavily as an advertising vehicle.

On Thursday, Trump said there is nothing he would rather do than get rid of his Twitter account but he had to keep it in order to circumvent the press and get his version of events to millions of followers.

The protections of Section 230 have often been under fire for different reasons from lawmakers including Big Tech critic Senator Josh Hawley. Critics argue that they give internet companies a free pass on things like hate speech and content that supports terror organizations.

Social media companies have been under pressure from many quarters, both in the United States and other countries, to better control misinformation and harmful content on their services.

Twitter Chief Executive Jack Dorsey said on the company’s website late Wednesday that the president’s tweets “may mislead people into thinking they don’t need to register to get a ballot. Our intention is to connect the dots of conflicting statements and show the information in dispute so people can judge for themselves.”

Steve DelBianco, president of NetChoice, a trade group that counts Twitter, Facebook and Google among its members, said the proposed executive order “is trampling the First Amendment by threatening the fundamental free speech rights of social media platforms.”