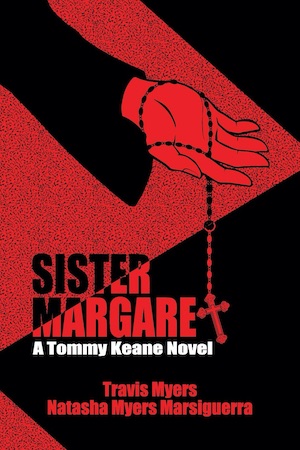 Brother and sister team Travis Myers and Natasha Myers Marsiguerra are behind this debut police procedural, the first in a series featuring veteran NYPD detective Tommy Keane. He’s just over a year from retirement and should be coasting it, but after committing a breach of protocol, Keane finds himself transferred from the Bronx patch he knows so well to the Upper East Side of Manhattan.

It’s a neighbourhood that’s changed a lot in recent decades as gentrification has taken over and the well-to-do have moved in, but there are still pockets of the old ‘hood to be found, and Keane knows just where to find them. You see, he was born and brought up there, and after divorcing from his wife he is living with his elderly mother just 20 or so blocks away from the 21st Precinct which is his new place of work.

After the cut and thrust of a rough, tough neighbourhood, Keane is expecting something of an easy ride – his new patch includes Park Avenue after all and his first outing is to a bored rich woman who is convinced that one of her hired helps has filched a pair of very expensive earrings. But Keane and colleague Detective Doreen Doyle have to leave in a hurry when the call cones in about a murder in a Catholic school a short distance away.

The victim is the head teacher, Sister Margaret, and the scene that greets the first officers to arrive shocks them to the core. The nun has been badly mutilated and left half naked in her office chair. What manner of sick individual would do such a thing? It’s probably fair to warn readers right now that this book isn’t for the faint-hearted. It opens with a scene that will have dog lovers running for the hills and the description of Sister Margaret’s crime scene are pretty stomach churning too. The gritty realism employed here sometimes flirts with the bounds of good taste.

Leaving that aside, Sister Margaret is a slam dunk police procedural, giving the most on-the-money insider view of an investigation I’ve read since reviewing the work of RC Bridgestock. Both are writing duos, and both have a former police officer in their pairing. In this case it is Travis Myers, who is a retired New York City police detective, so he really knows what he’s writing about. The brother and sister also have New York roots, and their familiarity with the setting makes the locations pop right off the page.

So, what actually happened at Our Lady of Perpetual Hope High School for Girls? The case is a complicated one and there are plenty of dead ends to be pursued before a final denouement that is both unexpected and disturbing. As the detectives work the evidence we get to know a little more about them all, and I warmed to Doyle and to Stein, another hard-bitten veteran cop with whom Keane soon forms a bond. Best of all though is Keane himself, a guy with hidden depths, who has a wonderfully worldly-wise outlook on life, plays by his own set of rules and exudes an air of ‘been there, done that’. The scenes with his elderly mother, who is teetering on the edge of dementia and a wonderfully off-beat character in her own right, are welcome light relief in a book that is sometimes very dark.

If you’re on the lookout for a new series of gritty police procedurals, then Travis Myers and Natasha Myers Marsiguerra are definitely names to watch. There’s a second Tommy Keane book already in the pipeline too, so we can expect more from this uncompromising law enforcer.

If New York’s your ideal crime setting, try City of Windows by Robert Pobi or Thirteen by Steve Cavanagh.