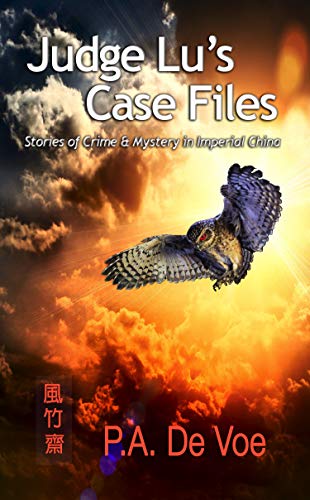 Need some escapism? Like, to a different time and place – preferably a simpler one? One where hearing the day’s news doesn’t threaten to give you apoplexy? Well, here you are. PA De Voe is an American writer who must have lived a past life in Ming Dynasty China, because she writes novels and short stories set in that period with such great authenticity. Pure pleasure for this reader.

De Voe and I are both devotees of the Judge Dee books by Robert van Gulik, set in the Tang Dynasty, and her writing shares their many strengths of story, characterisation, vivid place-setting, and crystal-clear telling. The 12 short stories in this book will definitely give you that ‘I’m somewhere else’ feeling. Plus, De Voe’s works have one big advantage over van Gulik’s: he died in 1967, whereas she’s still writing!

The plots of the dozen stories are straightforward, which is partly a result of their length and partly reflects the realities of the justice system in China in the late 1300s. Magistrates, like Judge Lu, were expected to wrap up a case, even a significant one – murder, major theft, rape – in a day or two. No long-drawn-out cold case investigations here! What’s more, miscreants were expected to confess. To make sure the proceedings moved along speedily and that they got those confessions, jailers were allowed to use torture. Judge Lu, with prescient 21st century sensibilities, authorises these methods only as a last resort, not trusting the veracity of the information gained. Just knowing torture might come into play prods many a suspect into a quick confession.

Some of these ideas have persisted in Chinese culture until recent times. You may recall when Madame Mao was on trial for counterrevolutionary activities as a member of the Gang of Four, she was much vilified for her refusal to confess. I don’t believe torture came into it, though.

By adhering to these ancient precepts, De Voe’s seemingly simple stories provide insights into the worldview of Chinese people over the centuries. Good examples are the emphasis on learning and the way one family member’s success benefits and adds lustre to the whole family.

Judge Lu is ably assisted by his two personal retainers and bodyguards, Zhang and Ma, who are models of reliability. They investigate seedy wine-bars where the judge cannot appear, and uncover rumours he would never otherwise hear. Judge Lu’s younger brother Fu-hao serves as his secretary, and the young man’s overriding concern is that the Judge will get into some kind of trouble that will bring disaster on the family – and his own head. The personalities of Judge Lu and his brother strike me as both realistic and interesting. While you may always know what Fu-hao is thinking, Judge Lu’s subtlety may surprise you.

These are stories about human behaviour, and whether they are set in 14th century China or pulled from today’s headlines in The Guardian or The Washington Post, people are driven by the same motivations. You recognise them in the rapist Wu Guei-qing, about to be honoured in a public ceremony as a filial son, or in Master Tong Hong-gui’s reasons for murdering his pregnant mistress.

De Voe leads off the first story with a set of statements that describe the Judge’s frequent dilemma in figuring out how to proceed against the parties he believes guilty of a crime. They also pretty accurately describe the balancing act faced by public servants up to our current day:

A magistrate’s first duty is to the Ming Emperor through serving the people in his district.
He controls criminals and their destructive impact on the community.
He brings a sense of fairness and justice, which prevents unrest and revolt.
This is a simple task if the criminal behaviour is from the lowly.
Not so simple if the illegal activities benefit the local gentry.
Every magistrate’s success in office depends on the gentry’s support.

Reading these stories was like a vacation! A few years ago, I wrote about Judge Dee for Classics in September, but for a more modern sojourn try one of these five great crime novels set in Asia.

Boy, 10, ‘shot mother dead after she refused to buy him VR headset’
Welcome the Holiday Season With Dior Beauty’s The Atelier of Dreams
Starmer pledges to abolish House of Lords in first term as PM
Nas and 21 Savage Release New Song “One Mic, One Gun”: Listen
Man arrested over fatal shooting of Migos rapper Takeoff