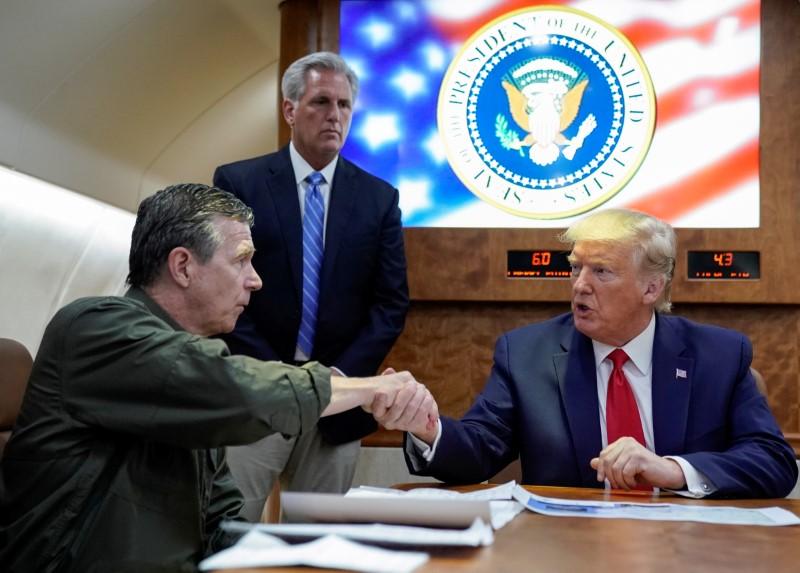 WASHINGTON (Reuters) – U.S. President Donald Trump said on Tuesday the Republican National Convention set for August in North Carolina would have to be held in another state because of social distancing restrictions ordered by the state’s governor.

Trump made the announcement on Twitter hours after Governor Roy Cooper, a Democrat, rejected Republican demands for a full-fledged presidential nominating convention in Charlotte, telling organizers that planning for a scaled-down event was “a necessity” due to the coronavirus.

Cooper “is still in Shelter-In-Place Mode, and not allowing us to occupy the arena as originally anticipated and promised,” Trump said.

“We are now forced to seek another State to host the 2020 Republican National Convention,” Trump said, without indicating which states were under consideration. The convention will nominate Trump to seek a second term in the Nov. 3 election.

In response, Cooper said via Twitter: “It’s unfortunate they never agreed to scale down and make changes to keep people safe.”

Cooper sent an earlier letter to Republican Party leaders a day before the deadline Trump had set for the state to guarantee that convention attendance would not be limited by social distancing restrictions.

Cooper said he could make no such promise for the four-day nominating convention scheduled to open on Aug. 24.

Without knowing how the COVID-19 outbreak will continue to unfold, he said, “planning for a scaled-down convention with fewer people, social distancing and face coverings is a necessity.”

Republican officials had submitted proposals for a “full convention” rather than one with fewer participants and social distancing as requested by the state, Cooper said.

“As much as we want the conditions surrounding COVID-19 to be favorable enough for you to hold the convention you describe in late August, it is very unlikely,” Cooper said.

Republican National Committee Chairwoman Ronna McDaniel said in a Twitter post that the party would consider other locations for the convention and “begin visiting the multiple cities and states who have reached out to us.”

Republican officials are planning to visit Nashville, Tennessee, this week, according to a person familiar with discussions.

The party was also considering a split convention, with the votes on platform and rules taking place in Charlotte and the speeches and pageantry taking place in another city, such as Jacksonville, Florida, or Las Vegas, said a source familiar with the discussions.

Democrats have delayed their convention in Milwaukee, which was set for Aug. 17 to 20, and left the door open to a revised format. Former Vice President Joe Biden is the party’s presumptive presidential nominee.

Tesla recalls more than 80,000 cars in China over software and seatbelt issues
iPhone maker Foxconn entices angry workers in China to return as Apple faces supply crunch
Delta is making it harder to get into its airport lounges after they were flooded by travelers
Tech companies begin rerouting critical chip supplies to trucks with rail strike looming
‘Die Hard’ Actor Clarence Gilyard Dead at 66