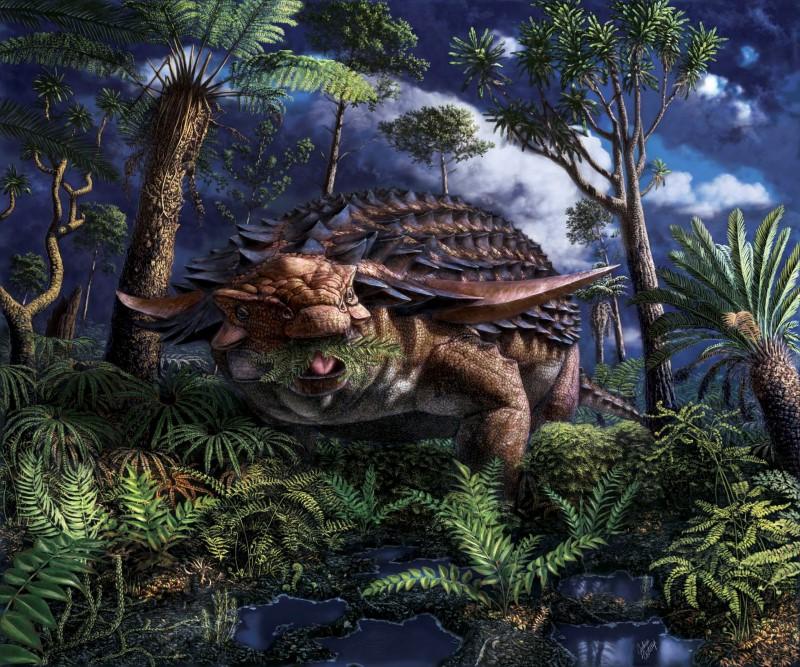 FILE PHOTO: The Cretaceous Period armoured dinosaur Borealopelta markmitchelli, which lived 110 million years ago in what is now the Canadian province of Alberta, eats ferns in an illustration released on June 2, 2020. Royal Tyrrell Museum of Palaeontology/Julius Csotonyi/Handout via REUTERS .

WASHINGTON (Reuters) – In a forest rebounding after a wildfire 110 million years ago, an armored dinosaur devoured a meal of tender ferns in western Canada before suffering a sudden death – perhaps drowning in a river or a flash flood – and being washed out to sea.

That unfortunate Cretaceous Period beast is now providing unique insight into the dietary habits of plant-eating dinosaurs. Scientists said on Wednesday the fossilized stomach contents of the dinosaur, called Borealopelta markmitchelli, were preserved in exquisite detail with its skeleton, revealing what was on the menu for its last meal.

The fossil, from the province of Alberta, represents the best-preserved stomach contents of any plant-eating dinosaur, revealing even the cellular structure of the leaves and intact spores.

“Direct evidence of diet in herbivorous dinosaurs is very rare,” said paleontologist Caleb Brown of the Royal Tyrrell Museum of Palaeontology in Alberta, lead author of the research published in the journal Royal Society Open Science. “Almost everything we think we know about the diet of these animals is based on indirect data such as tooth wear, jaw biomechanics, the available plants and the nutritional content and digestibility of those plants.”

Borealopelta, 18 feet long (5.5 meters) and 1-1/2 tons, was a member of a group called nodosaurs. It had a wide body, small head and walked on four short legs. As protection from large meat-eating dinosaurs, its body was studded with osteoderms – bones embedded in the skin – and it boasted a large spike on each shoulder.

Its stomach contents were comprised mostly of leaves of a particular type of fern, with very few leaves of conifers and cycads – a type of evergreen. A sizable amount of charcoal was found in the stomach, indicating it was browsing in a recently burned area.

Also found were dozens of gastroliths, or gizzard stones, swallowed by certain animals including some modern birds and crocodilians to aid digestion.