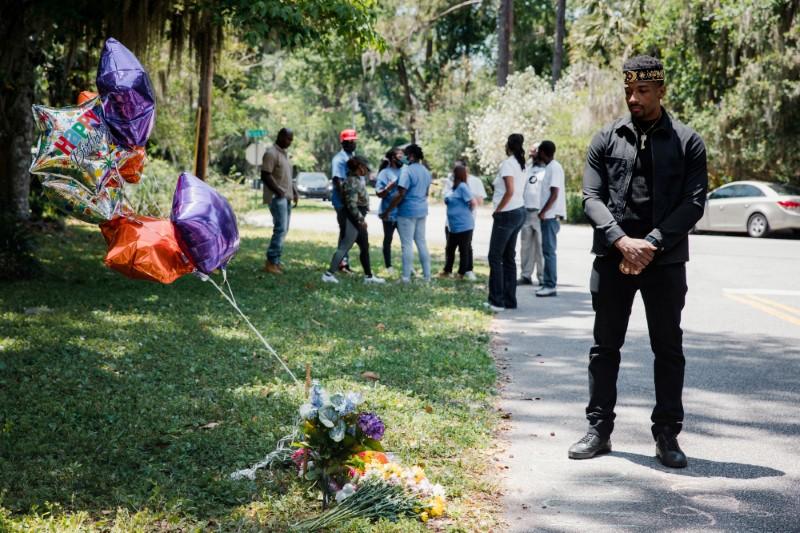 ATLANTA (Reuters) – Three white men charged with the murder of an unarmed black man in Georgia will face a judge Thursday morning in a case that caused a national outcry after cellphone video of the shooting was leaked on social media.

FILE PHOTO: A man stands next to the memorial for Ahmaud Arbery, at the place where he was shot and killed in February after being chased by a white former law enforcement officer and his son, in the Satilla Shores neighborhood, at the Glynn County Courthouse in Brunswick, Georgia, U.S., May 8, 2020. REUTERS/Dustin Chambers/File Photo

Protests are expected outside the courthouse after more than a week of demonstrations across the United States over the death of George Floyd, a black American who was pinned down to the ground by a white police officer in Minneapolis.

In the case in Georgia, the three men were not charged until more than two months after Ahmaud Arbery, 25, was shot dead while running on Feb. 23.

State police stepped in to investigate after the video was widely seen and Glynn County police took no action, and the Georgia Bureau of Investigation (GBI) pressed charges.

A former police officer is accused of involvement in Arbery’s death in the coastal community of Brunswick, and state officials have called in the National Guard to assist with the crowds expected outside the courthouse.

Glynn County Magistrate Judge Wallace Harrell who will review whether or not the GBI had probable cause to bring the charges.

William “Roddie” Bryan, a neighbor of the McMichaels who took the cellphone video, was charged with felony murder and attempt to illegally detain and confine.

Police say Gregory McMichael saw Arbery running in his neighborhood just outside Brunswick and believed he looked like a burglary suspect. The elder McMichael called his son and the two armed themselves and gave chase in a pickup truck, police said.

Bryan’s video footage appears to show the McMichaels confronting Arbery before Arbery was shot with a shotgun.

If convicted, the three men face life in prison or the death penalty.