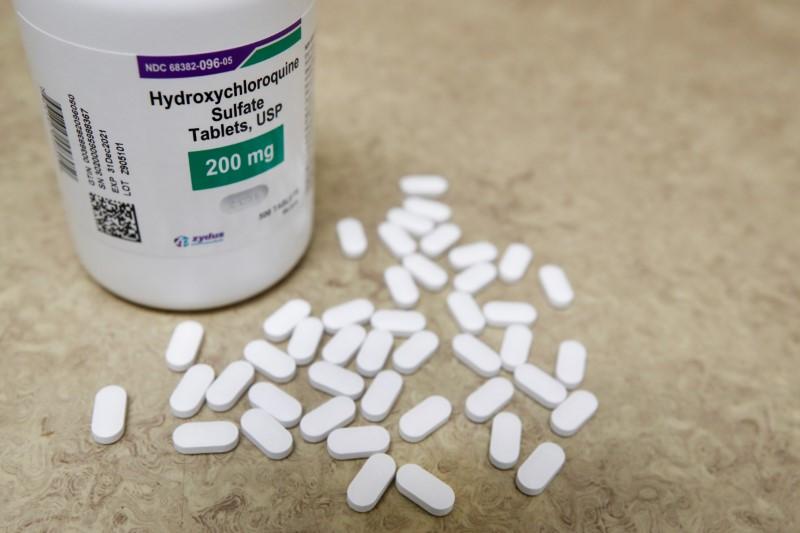 LONDON (Reuters) – Scientists are resuming COVID-19 trials of the now world-famous drug hydroxychloroquine, as confusion continues to reign about the anti-malarial hailed by U.S. President Donald Trump as a potential “game-changer” in fighting the pandemic.

FILE PHOTO: The drug hydroxychloroquine, pushed by U.S. President Donald Trump and others in recent months as a possible treatment to people infected with the coronavirus disease (COVID-19), is displayed at the Rock Canyon Pharmacy in Provo, Utah, U.S. May 27, 2020. REUTERS/George Frey

The renewed research push follows widespread criticism of the quality of data in a study published by The Lancet, an influential medical journal, which found high risks associated with the treatment.

The World Health Organization, which had last week paused trials when The Lancet study showed the drug was tied to an increased risk of death in hospitalized patients, said on Wednesday it was ready to resume trials.

The WHO’s change of mind is “a wise decision”, according to Martin Landray, co-lead scientist on the Recovery trial, the world’s largest research project into existing drugs that might be repurposed to treat COVID-19 patients.

“What all this episode really reflects is that without randomised trials, there is huge uncertainty,” said Landray, a professor of medicine and epidemiology at Oxford university.

Randomised studies are the gold standard in research, randomly assigning a treatment to one group of people and a dummy to another group so that the two can be compared. The Lancet study was a “retrospective observational” study, using a data set from an analytics firm, to see what effects the drug had had on some COVID-19 patients, compared to those who did not get it.

The WHO’s about-face came after nearly 150 doctors signed a letter to the Lancet outlining concerns about the study’s conclusions. The journal itself published an expression of concern about the research this week, saying “serious scientific questions have been brought to our attention”.

Some scientists said the episode had set back efforts to determine whether hydroxychloroquine was an effective or risky treatment for COVID-19, as some other trials around the world had also halted following the WHO’s initial decision to pause.

“It’s really impacted quite negatively the sort of studies that would be able to say if there is a benefit or harm,” Will Schilling told Reuters. He is co-lead on the UK COPCOV study which was paused last week, just days after its launch.

“At the moment, we don’t really know. That’s why these studies are needed, and now they’ve been slightly waylaid by all of this.”

Scientists acknowledge, though, that studies are being conducted at break-neck speed while garnering unprecedented levels of attention that could give findings unwarranted weight.

THE PRESIDENT’S TAKING IT

The drug has hit global headlines in large part because of its promotion by Trump, who said in March it could be a game-changer and last month revealed he was taking it himself, even after his own Food and Drug Administration (FDA) had advised that its efficacy and safety were unproven.

In the absence of clear scientific evidence, some authorities and consumers are buying up stocks of the drug in case it turns out to be effective. Britain, for example, is spending millions of pounds bulk-buying tablets.

Hydroxychloroquine has been shown in laboratory experiments earlier this year to be able to block the SARS-CoV-2 virus that causes COVID-19, but this effect has not been replicated in rigorous trials in people.

A separate study by University of Minnesota scientists of the potential preventative effect of hydroxychloroquine against the new coronavirus found it did not protect patients who had been given it prior to being exposed to COVID-19.

Here again, though, the waters have been muddied. The New England Journal of Medicine, which published the research on Wednesday, noted in an editorial, however, that there were limits to the scope of the study.

The University of Minnesota study also was limited in the scenario it tested, said Richard Chaisson, a Johns Hopkins researcher who is running a separate trial of the drug to determine whether it is effective in treating patients with moderate to severe versions of COVID-19.

There is still a need for robust studies looking at whether it might work in low doses before or after exposure, as well as against mild cases, moderate cases, hospitalized patients and seriously ill ones, he added.

The WHO decision to halt its trials last week had knock-on effects across the drug industry and medical profession.

French drugmaker Sanofi temporarily stopped enrolling recruits to its own study and pulled supplies of the drug for treatment. The UK COPCOV trial, aimed at establishing if hydroxychloroquine can prevent healthcare workers from contracting COVID-19, hit pause just a week after its launch.

Those studies are yet to resume.

Some trials have, however, continued despite the WHO’s move.

Novartis has not changed course with its study and the UK Recovery trial paused only briefly before moving ahead after safety checks. It is still enrolling patients and has signed up 4,500 recruits so far – 1,500 patients who are on the drug and around 3,000 who aren’t.

In short, the jury’s still out on hydroxychloroquine for COVID-19, according to Landray at Recovery.