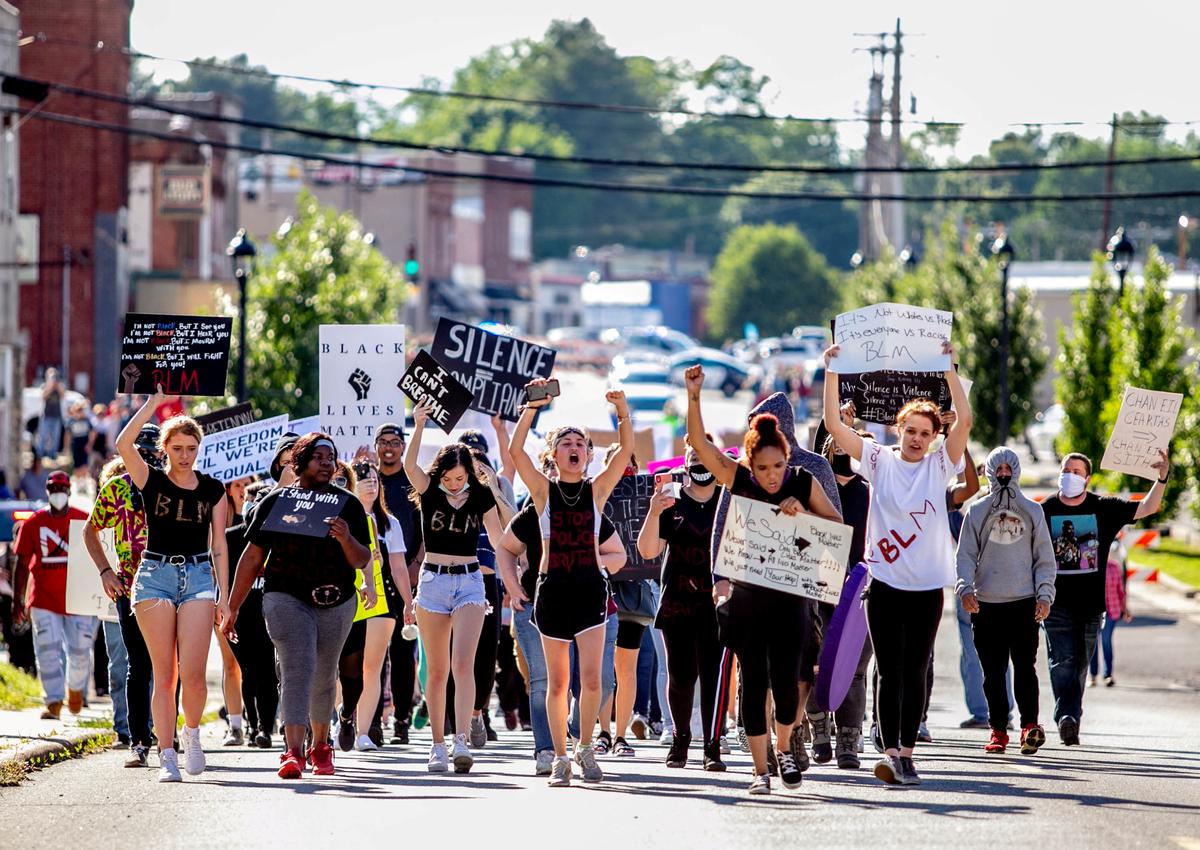 Nearly a century ago this southern Illinois town of 4,200 residents expelled most of its African-American residents, according to historians.

The rally was held in solidarity with others protesting the death of George Floyd in Minneapolis with a white policeman’s knee on his neck. Some residents said they were marching as a way to try to move beyond their own community’s past.

Joe Plemon, 73, an elder at the First Evangelical Presbyterian Church, said he had prepared several Bible passages – laments – to read at the protest.

“We have been challenged within my own denomination, and I know this is going on at other churches as well, to say, ‘Let’s not just wink at this, let’s step up, let’s admit the things that we’re ashamed of and let’s confess the places where we’ve sinned.’”

Anna was once known as one of the “sundown towns,” or thousands of American localities where black people were not welcome, according to sociologist and historian James Loewen, who wrote a book about the phenomenon.

While most national attention has been focused on massive demonstrations and violent clashes with police in the United States’ biggest cities like New York and Los Angeles, hundreds of spontaneous demonstrations have popped up in little towns and rural areas across the nation in recent days.

A BuzzFeed reporter based in Missoula, Montana, has gathered a growing thread of local news reports and social media posts showing nearly 250 protests in smaller communities – some with just a few hundred residents – in all 50 states.

Many of them are being held in conservative towns like Anna, which is 90% white and sits in a county where Republican President Donald Trump won 68% of the votes in the 2016 election.

“We can’t put our head in the sand,” Plemon said. “It’s good for us to step up and say we want to be part of the solution.”

One of the mostly young organizers was 18-year-old Jenna Gomez from nearby Cobden, Illinois, who said she is used to seeing Confederate flags displayed by area businesses.

Gomez had thought maybe a handful of people would show up to the event when she and some others started a group chat about it.

“We wanted to show everyone that we are not the past,” she said at the rally over cheers and a call-and-response of “United we stand! United we fall!”

About a half-hour north in Carbondale, Illinois, two other young organizers – sisters Adah, 16, and Maat Mays, 18 – came up with the idea of staging a vigil on Sunday in their small town of 25,000 while watching live Instagram feeds of demonstrations in Minneapolis.

“When the protests started in the larger cities, I thought, ‘I am not in a big city but I can still bring awareness and find a way to honor the names of the people who have been killed by the police,’” said Maat Mays.

One state over in Indiana, sociology professor Jared Friesen found it “remarkable” that more than a hundred people gathered on Wednesday in the center of Huntington – population 36,000, 96% white and the hometown of Republican former Vice President Dan Quayle.

“This runs contrary to the ideas that people have about small towns,” Friesen said, “That we are all hicks and we don’t care about what is happening.”

But some in these communities do not back the wave of public action.

Jeff Barnes, a retired housepainter and proud Trump supporter who lives in Anna, said he agreed with the president’s threat to use the military against looters.

“That won’t happen around here, I can assure you,” he said, gesturing to a group of about 20 men who were not visibly armed and said they were there to protect businesses.

The flashes of hostility did not faze seasoned activists like 72-year-old Mildred Henderson.

“Pretty soon the minority will be the majority, and they would not want to be treated the way they have treated some blacks and some other minorities,” she said. “They haven’t thought about the script being flipped. But it’s about to be.”

Reporting by Brian Munoz in Anna and Carbondale, Illinois, and Mica Rosenberg in New York; editing by Ross Colvin and Jonathan Oatis