Prestige executives have good reason to be proud of their brand, the global production leader in 40-60ft flybridge motor yachts, according to statistics compiled by Yachtbuilder International Media. 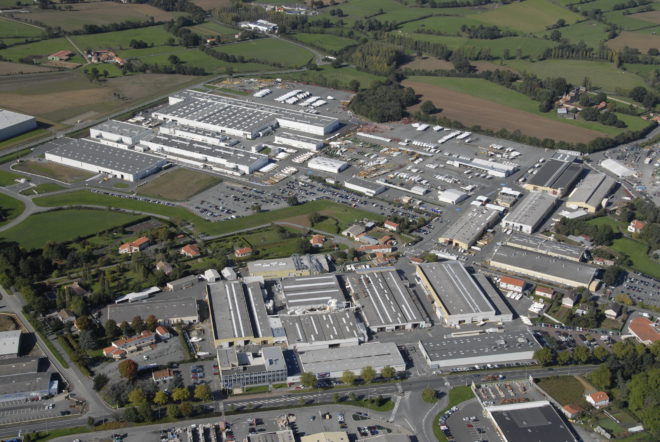 Prestige has a 16,000sqm facility in Les Herbiers in the Vendee region

Prestige is among 12 boat brands within Groupe Beneteau, one of the largest employers in the Vendee region in western France, where it employs nearly 5,000 people at 13 manufacturing sites. In total, the Group – which also has a leisure home division – has about 8,200 employees in France, the US, Poland, Italy and China, and produces nearly 10,000 boats a year.

Despite being one of the world’s largest boat-manufacturing conglomerates, Groupe Beneteau doesn’t have an extravagant image. It’s more synonymous with well-designed, practical, seaworthy boats that can be owner-driven. 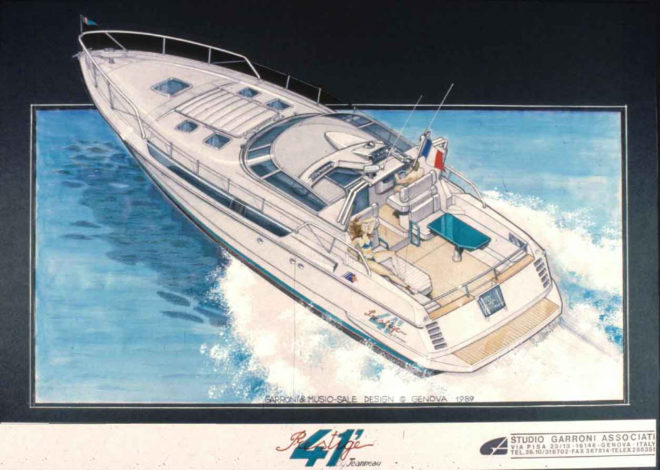 The Prestige 41’ designed by Garroni launched the brand in 1989

That DNA mixed with an emphasis on luxury, space and forward- thinking design is embodied in Prestige, an unpretentious brand that gets on with producing stylish, high-quality yachts. Unlike with some other brands in the sector, owners get a strong impression they are getting value for money in a premium product.

Yacht Style visited Prestige in Les Herbiers, southeast of Nantes, to tour the facility and meet General Manager Erwin Bamps, who joined the brand in 2018 after almost 17 years with UAE builder Gulf Craft.

“Prestige yachts have a timeless elegance. Prestige owners don’t need to show off,” the Belgian says. “Prestige is a yacht to live on in style and luxurious comfort, and celebrate success. Our yachts are also recognised for their ergonomics, well-appointed interiors and optimisation of living space.” 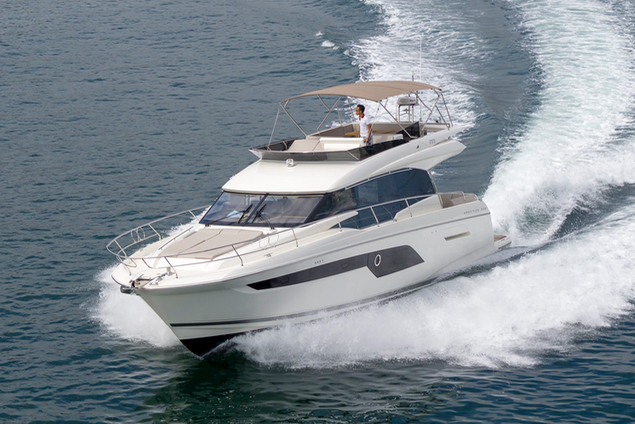 The Prestige 520, pictured in Hong Kong, succeeded the popular 500

Prestige believes it has the largest dealer network in the business, with 150 worldwide, focused on supporting each customer’s yachting experience. In the turbulent times we live in today, the easy accessibility and close proximity of such partners helps ensure owners can continue to spend quality time on the water with family and friends.

In this region, the brand is represented by Asia Yachting in Hong Kong, Macau and five Southeast Asian nations: Indonesia, Malaysia, Philippines, Singapore and Thailand. Vietyacht in Vietnam is among other dealers, along with China’s Speedo Marine and Yamaha Motor in Japan.

“Prestige has become synonymous with comfortable family yachting in the Asia-Pacific, from Thailand all the way to New Zealand. We have also captured a market leadership position in China and Vietnam due to our ability to cater to a corporate charter and entertainment clientele,” Bamps says. 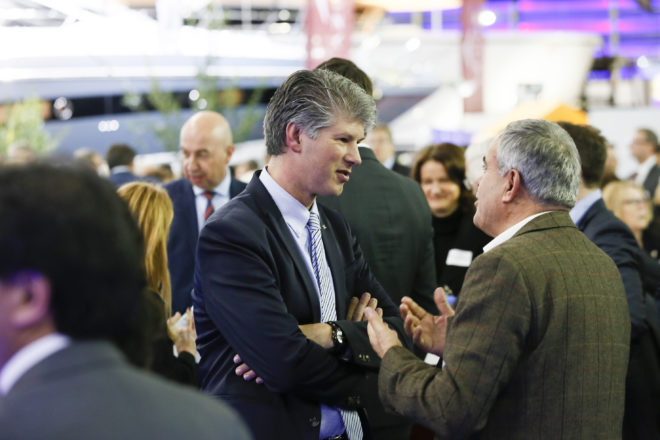 Belgian Erwin Bamps (at Boot Dusseldorf) has headed Prestige since 2018

“The yachting lifestyle is still in its infancy throughout Southeast Asia in spite of the area featuring some of the most beautiful cruising grounds worldwide. Fortunately, the continuous development of essential infrastructure is spelling great opportunity for the entire leisure marine industry, with the further creation of new yachting destinations.”

The brand’s heritage stems back to 1989 with the launch of the Prestige 41’, a logical extension of the Jeanneau power boat range into a more luxurious segment. Drawn by Garroni Design, which continues to work on Prestige yachts, the 41’ was a huge success, combining performance, style and large accommodation space below deck.

But the real turning point for the development of Prestige as a stand-alone brand came over two decades later with the 500 Flybridge, which attracted a lot of customers and felt like a real motor yacht, no longer small boats reaching new lengths. 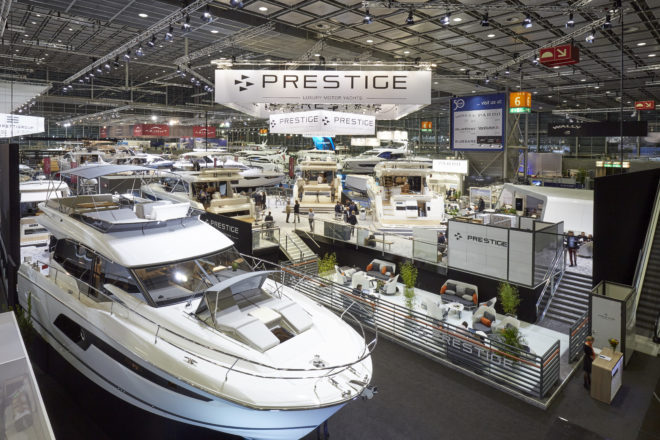 Officially presented at Boot Dusseldorf in January 2011, the yacht won multiple awards over the following year and proved a game changer for Prestige, putting the brand on the international map for flybridge motor yachts. Over 450 units were built for owners, who were attracted by its distinctive features including an aft galley and separate access for the owner’s cabin.

The Prestige range also assumed its own branding and image, as the luxury product in the Jeanneau stable followed on where the smaller power boat ranges finished, while retaining the parent brand’s seaworthy DNA.

Prestige’s biggest yacht was the now-discontinued 750, which debuted in early 2014 and even appeared in Asia by July of that year. More recent designs include the 520 (REVIEW, Issue 46) and 590 (REVIEW, Issue 49), models that succeeded the 500 and 560 respectively. 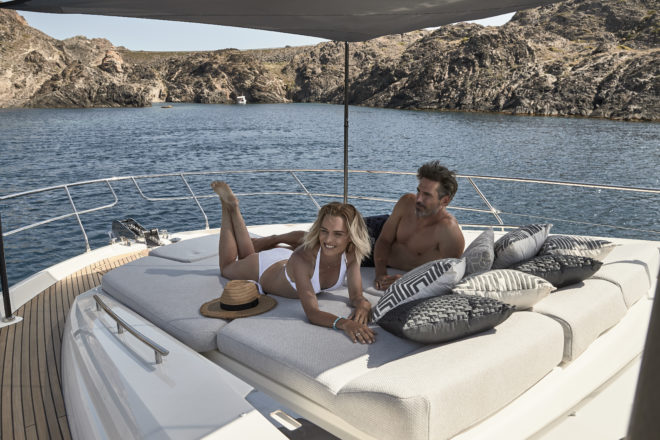 The 590S, which had its world premiere at Boot Dusseldorf this year, illustrates Prestige’s focus on relaxed comfort and outdoor living

Successes also continue at the smaller end of the range. At last year’s Cannes Yachting Festival, Prestige staged the world premiere of the 420 Flybridge – the 420S debuted at Southampton – and in the ensuing six months, it has become the fastest-selling Prestige model ever.

“Our design focus is on easy navigation and manoeuvrability, so Prestige is a favourite among newcomers to yachting,” Bamps says.

AT HOME IN VENDEE

Prestige’s main production facility is a substantial 16,000sqm factory, well over the size of two football pitches. The laminating shop uses a two-shift system with a surprisingly large proportion of female employees – over a third – a tradition that harks back to the start of boat production by Jeanneau in the locality, according to Bamps.

Working with a system of fixed position rotating moulds on spindles, the shop has an extensive overhead crane system for lifting and transporting the completed mouldings. Resin infusion is used on all boats over 50ft and partially used for some of the mouldings below 50ft. 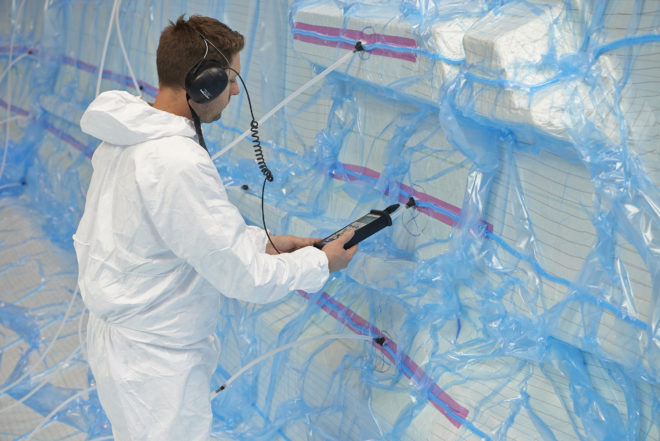 Resin infusion is used on all Prestige yachts over 50ft

After the moulding stage, the hulls and decks are passed to the assembly area where the two units have all the fittings, engine, plumbing and electrical systems installed before the hull and deck is joined together.

Each completed boat is fully tested in a water pool. Such is the attention to detail that final alignment of the doors and drawers of the interior furniture is done at the floating stage to allow for the fine changes in the joinery when the boat is fully supported in the water rather than on land.

Automation includes Computer Aided Manufacturing (CAM), such as an impressive five-axis robot capable of handling mouldings up to 20m in length. This is used for cutting all of the holes in the deck and production of plug tooling. 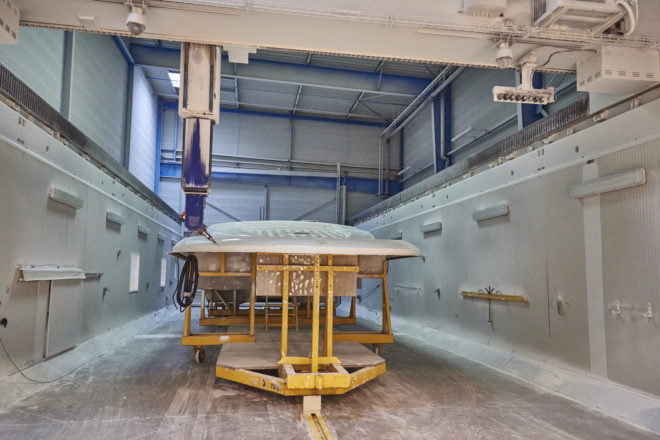 Prestige is far from resting on its past and current successes, and is very much looking to the future with the X-Line. The new range will be spearheaded by the X70 (YACHTS, Issue 52), which is scheduled to debut at the Cannes Yachting Festival in September and looks likely to be among the most innovative new models of 2020.

“The X-Line is a crossover product. Our research found that there’s a developing market for a boat between a trawler yacht and a conventional flybridge. The X-Line is the equivalent of an SUV in the car market, like a Porsche Cayenne. It has a lot of space, light and comfort, and is ideal for life on the water,” Bamps says.

“We say Prestige yachts are ‘where the sea feels like home’. X-Line is a home away from home, not an explorer yacht but still enjoyable for long voyages or hosting large groups. We are addressing the demand for features that are generally only available on larger superyachts.”

Scheduled to debut at Cannes this September, the high-volume Prestige X70 is a revolutionary design that doesn’t include traditional side decks

Bamps also says he’s keen to ensure that Asia sees the brand’s new products as soon as possible and believes the X70 will be suited for owners in the region.

“We’re really looking forward to introducing the new X-line to Asia. The first product, the X70, highlights the growing interest for higher-volume vessels with a true al fresco lifestyle, blurring the line between indoor and outdoor living spaces,” he says.

“Truly a home-away-from-home or a great venue for entertaining a large group of friends, it delivers a different and enhanced way of enjoying life at sea, and one we believe will resonate with the growing boating community and corporate-charter market in Asia.”

Google workers demand equal abortion benefits as state bans go into effect
Walmart strikes exclusive streaming deal to give Paramount+ to Walmart+ subscribers
How to pick the best MacBook so you’re not overspending for what you don’t need
‘Whatever it takes’: Cheney ‘thinking about’ presidential run in bid to block return of Trump
Thailand’s Super Charter: Ocean Emerald