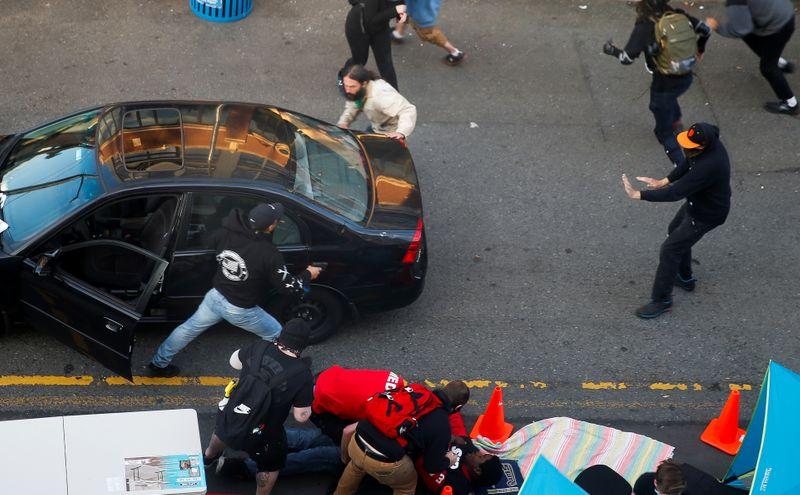 SEATTLE (Reuters) – Stunned protesters surround a car that has driven into their ranks. A man is lying on the ground nearby. Another man exits the driver’s side of the vehicle brandishing a gun. The protesters back away from him and he runs off and melts into the crowd as medics rush to help the wounded man.

A man exits a vehicle with a gun as Dan Gregory is tended to by medics after being shot in the arm by a driver who tried to drive through a protest against racial inequality in the aftermath of the death in Minneapolis police custody of George Floyd, in Seattle, Washington, U.S. June 7, 2020. REUTERS/Lindsey Wasson

The dramatic scenes of the shooting on the streets of Seattle were captured by Reuters photographer Lindsey Wasson during protests against police brutality and racism that have rocked the city – and many other places across the United States – in recent days.

Wasson, a Seattle native, has been covering the protests in Washington state’s largest city since May 31.

She took the series of pictures on Sunday evening from the window of a local newspaper that has offices overlooking a street that became a flashpoint.

“I had maybe just stepped to the main window, and I was looking over the crowd and seeing what was going on. I heard a scream and commotion and rushed to the dirty side window to photograph what was happening in a side street,” she said.

Video taken by others at the scene show that the man who was injured fell to the ground after he appeared to lean into the car. The shooter handed himself over to the police shortly after the incident.

A police report of the incident obtained by a local NPR radio station named the injured man as Daniel Gregory and said he had a gunshot wound to the arm.

A GoFundMe page set up for Gregory said he was recovering in the hospital. Reuters could not immediately reach Gregory for comment.

The demonstrations were sparked by the death of African-American George Floyd in police custody in Minneapolis two weeks ago, and have evolved into a movement for racial equality and reforms to police departments across the country.

For Wasson, the protests in her home town have been of a size and intensity unlike others she has seen before.

“It has been very odd to see something like this where you grew up. What feels different this time is the scale and how sustained it’s been. I’ve never seen it happen for this long, this extended energy and purpose,” she said.

The majority of her coverage of the protests over the last week has been of more peaceful moments, said Wasson.

At those times, she has focused on how she will tell the story. But it is also important for a photographer on the ground to read the situation and be aware of exit routes if needed, she added.

In this case, she had an unusual high vantage point that gave her the perfect view. Taking photos through glass is never ideal, because of the challenges related to reflection. How the images turn out depends on the light and how close you can get, said Wasson.

“It’s not ideal but at that particular moment it was the only thing available to me.”

(This story refiles to amend language in second paragraph)

Mid-Autumn Playtime at Capitol Singapore and CHIJMES
Zac Efron Slammed By PETA For Appearing In Ad With Captive Bear
Warner Bros. Discovery CEO David Zaslav embraces the past as he plans his company’s future
Riva launches 130’ Bellissima
Why has the FBI raided Trump’s estate – and what are they investigating?