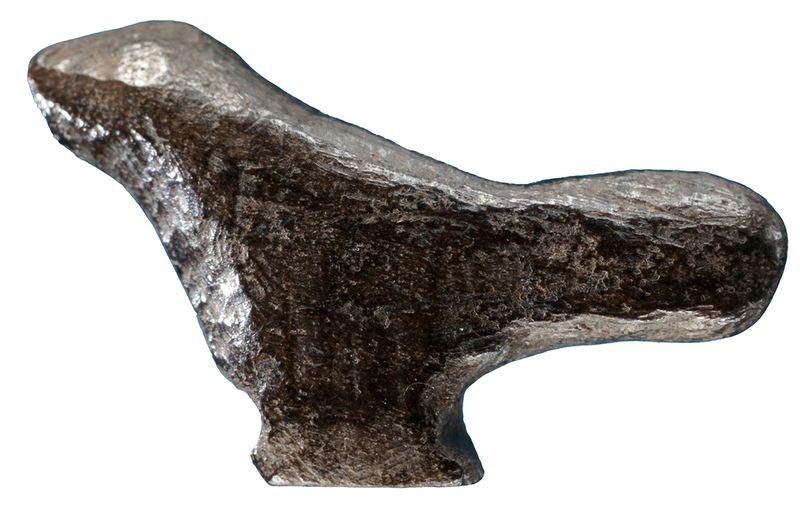 A miniature bird sculpture carved of burnt bone from China’s Henan Province dating to about 13,500 ago is seen in this photo released on June 10, 2020. Francesco d’Errico and Luc Doyon/Handout via REUTERS.

WASHINGTON (Reuters) – A tiny statuette of a bird carved from burnt bone about 13,500 years ago reveals the origins of Chinese art, embodying a style different from prehistoric three-dimensional artwork by people in other parts of the world, researchers said on Wednesday.

The figurine, found at a site called Lingjing in Henan Province in central China, depicts a standing bird on a pedestal and was crafted using stone tools employing four sculpting methods – abrasion, gouging, scraping and incision, the researchers said.

It is the oldest-known three-dimensional art from China and all of East Asia by 8,500 years, although there are primitive abstract engravings on bone and stone and personal ornaments made of animal teeth and shells predating it.

The bird sculpture, the product of an Ice Age hunter-gatherer culture, is six-tenths of an inch (1.5 cm) long, apparently representing a songbird.

“Examining this figurine under the microscope and looking at its high-resolution 3D reconstruction is a moving experience. It opens a window on micro-gestures made by a great artist,” said archeologist Francesco d’Errico of the French National Centre for Scientific Research, who is also attached to the Universities of Bordeaux and Bergen.

Humankind’s earliest-known three-dimensional carvings, made of mammoth ivory, date to 40,000 years ago from southern Germany.

The bird was so expertly crafted from the bone of an unidentified mammal that the artist made the tail slightly oversized so the figurine would not fall forward, indicating an understanding of achieving balance, said d’Errico, a senior author of the research published in the journal PLOS ONE.

It is still unclear whether three-dimensional artwork arose independently in various locales or by diffusion from a prehistoric center of origin. The figurine differs in size, style and technology from older and contemporaneous carvings from Europe and Siberia, d’Errico said, suggesting it belongs to a distinctive Chinese artistic tradition.

Reporting by Will Dunham; Editing by Peter Cooney

The Damned Lovely by Adam Frost
‘Assault on a political opponent’: Donald Trump claims FBI ‘stole’ his passports during raid
House of the Dragon Review: HBO’s Game of Thrones Prequel Flies High, But Does Take a While to Catch Fire
Chrono24 Makes Buying Watches a Safe and Easy Feat
Sudden crypto market drop sends bitcoin below $22,000