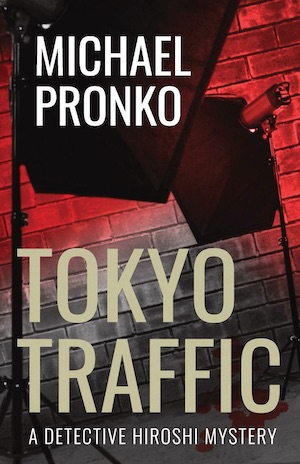 Let’s get things going in our new books report with a title set in Japan. Tokyo Traffic is by American author Michael Pronko and shows us a side of the city not always prominent in Japanese crime fiction, which often has a bit of a proper feel to it. (Though not always.) Lots more excitement too with some new domestic noir from Louise Candlish, a noir-ish thriller based on lies by AJ Park, high action in Washington with Otho Eskin and a trip back to 1930s San Francisco with Shelley Blanton-Stroud. Plenty to choose from, so dip in…

The Other Passenger by Louise Candlish

Louise Candlish has been garnering quite a name for herself with her sharply written additions to the domestic noir genre. Her latest, The Other Passenger, is out 25 June and gives a very different view of London, set as it is among the ‘water rats’ of the Thames riverboat community. Jamie has left the stress and strains of city living behind and now enjoys a riverboat commute to work each day, accompanied by Kit, a young, charismatic neighbour. Then one day Kit isn’t there – and the police believe Jamie had a hand in his disappearance. But Jamie had nothing to do with what happened to Kit… or did he?
Pre-order now on Amazon

The First Lie by AJ Park

What would crime fiction be without untruths? Pretty darn boring, that’s what. Out now for Kindle, The First Lie is the latest in a long line of novels featuring devious deeds and fiendish fibs, arrives. Paul Reeves gets home from work to find his wife Alice in the bathroom, and in a right state. She’s shaking, incoherent and covered in blood… and has a dead man for company. She never meant to kill the intruder and is terrified by what might happen next. So Paul and Alice decide to cover up the crime and just like in old school noir, that first lie will lead to an avalanche of truth-bending in this suspenseful thriller by AJ Park.
Buy now on Amazon

The Reflecting Pool by Otho Eskin

Out on 23 June, The Reflecting Pool by Otho Eskin is one of those high-octane thrillers that moves at pace through Washington, DC. Marko Zorn is a police detective but he moonlights by taking on projects that aren’t strictly within the law. When he comes across the body of a Secret Service man, Zorn stumbles onto a domestic terrorism plot which is linked to the White House. Meanwhile, characters from the DC underworld are on his tail as they fight over an illegal shipment of arms. And all this activity is drawing heat in his day job. Zorn would rather be at home looking at his art collection, no doubt…
Pre-order now on Amazon

She’s been hailed as ‘Raymond Chandler for feminists’, and Shelley Blanton-Stroud’s latest, out 23 June, features a most singular female protagonist. The Copy Boy of the title is Jane, who leaves the dust bowls of the Great Depression behind in something of a hurry and moves to San Francisco, where she disguises herself as a male and lands herself a job as a copy boy on the local newspaper. But Jane is running away from a dark deed in her past, and when that past threatens to catch up with her and ruin everything, she has to act fast.
Pre-order now on Amazon