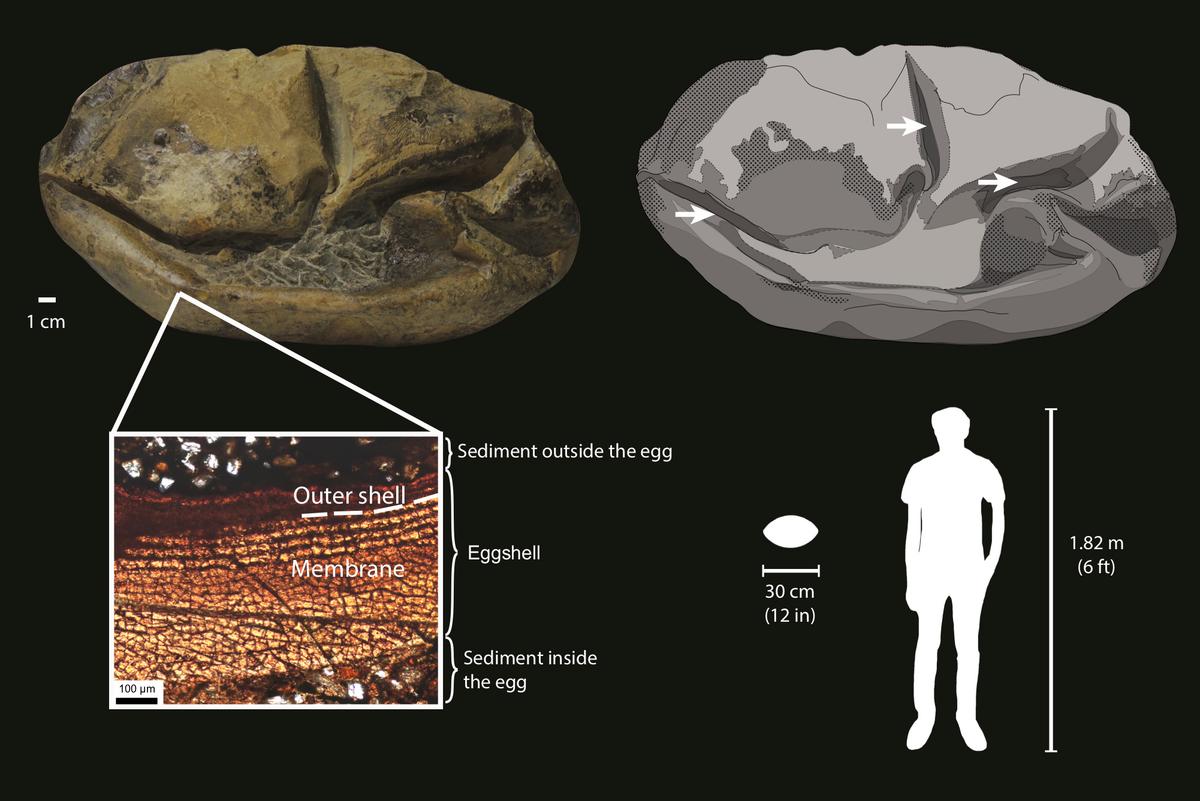 (Reuters) – A mysterious 68-million-year-old fossil found on Seymour Island off Antarctica’s coast that looked like a deflated football has turned out to be a unique find – the second-largest egg on record and one that may have belonged to a huge marine reptile that lived alongside the dinosaurs.

An illustration of a fossil egg of a marine reptile, found in Antarctica, and a representative size of the egg is seen in this handout obtained by Reuters on June 16, 2020. Mandatory credit UNIVERSITY OF CHILE/Handout via REUTERS

The fossilized egg – measuring 8 by 11 inches (29 by 20 cm) – is only slightly smaller than eggs of Madagascar’s giant flightless elephant birds that went extinct only in the past several centuries, scientists said on Wednesday.

While birds, crocodilians and many dinosaurs laid hard-shelled eggs, the Antarctic egg had a soft, parchment-like shell.

“This new egg is the very first fossil egg from Antarctica, and the largest soft-shelled egg ever discovered,” said University of Texas paleontologist Lucas Legendre, lead author of the research published in the journal Nature.

“It looks a bit like a deflated football: elongated, collapsed, with many creases and folds on its surface. One side is flattened, suggesting this is where it came in contact with the sea floor. Its eggshell is very thin and poorly mineralized, like in the eggs of lizard and snakes.”

The only creatures in Antarctica at that time large enough to lay such an egg were seagoing reptiles: the marine lizards called mosasaurs and the long-necked plesiosaurs. The fossil challenges the notion that these animals did not lay eggs and were fully viviparous, giving birth to live young.

“We suspect these large reptiles had the same reproductive strategy as viviparous lizards and snakes, which lay eggs with a very thin shell that hatch immediately after being laid,” Legendre said.

The egg had no embryonic remains and the mother’s skeleton was not found to identify what animal laid it. Among the candidates are species of mosasaurs reaching 50 feet (15 meters) long and plesiosaurs reaching 33 feet (10 meters) long, Legendre said.

Mosasaurs and plesiosaurs went extinct at the same time as the dinosaurs after an asteroid struck Earth 66 million years ago.

Scientists from the University of Chile and the country’s Museum of Natural History found the fossil in 2011. Initially bewildered by it, they nicknamed it “The Thing,” after the name of a science-fiction film.

“When we arrived at camp we asked the geologists that accompanied us if they had ever seen anything like it,” said University of Chile paleontology researcher Rodrigo Otero. “Their expression of bewilderment said it all.”

Reporting by Will Dunham in Washington and Dave Sherwood in Santiago; Editing by Lisa Shumaker and Sandra Maler

Millions flock to mark death of TikTok ‘bones, no bones’ star – Noodle the dog
Why Silicon Valley is so hot on nuclear energy and what it means for the industry
A Private Spy
Chancellor to announce major reforms for UK’s financial sector in quest to ‘turbocharge’ growth
Former US spy Anne Sacoolas avoids jail over death of teen motorcyclist Harry Dunn