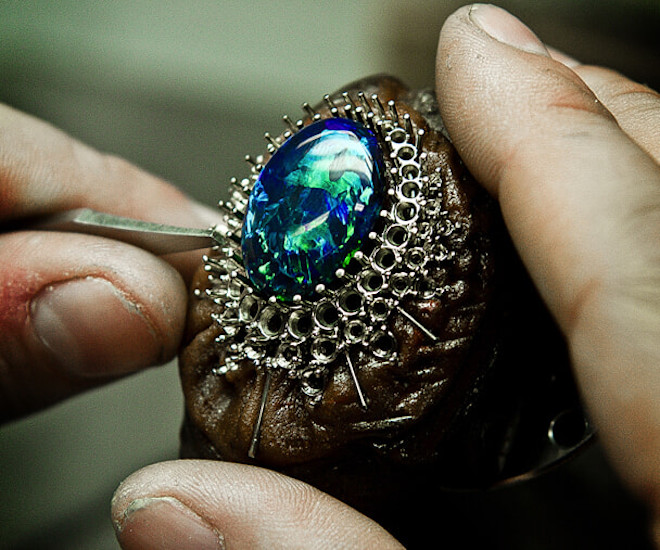 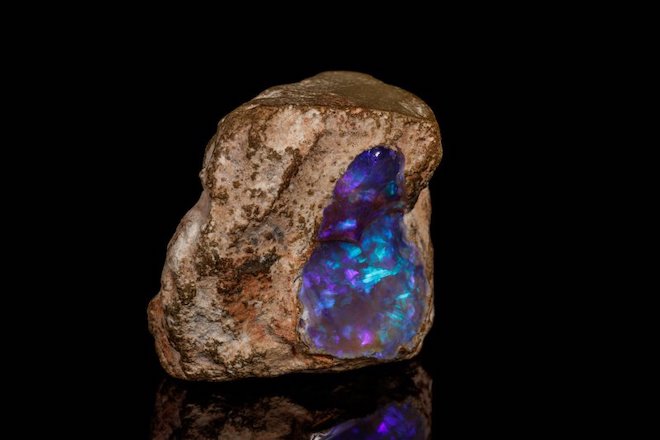 “They say you can see the whole universe in opal, that’s how … old they are,” says Howard Ratner, a gem dealer played by Adam Sandler in the Netflix hit, Uncut Gems. Through the ages and across cultures, opals have been symbols of good fortune and destiny. In old Arabic legends, opals fell from the heavens in flashes of lightning; the ancient Greeks believed opals bestowed prophetic powers; and the Romans, from which we derive the kaleidoscopic gem’s modern name – ‘Opalus’ translates into ‘precious stone’. In the movie, real life pro-basketballer Kevin Garnett was so besotted by the opal that he believed it was key to his winning the games.

Rare and valuable, opal was prized by royalty and it fascinated aristocrats and their jewellers with its rainbow hues alike. Until the discovery of vast deposits in Australia in the 19th century, the only known source was Červenica beyond the Roman frontier in Slovakia. 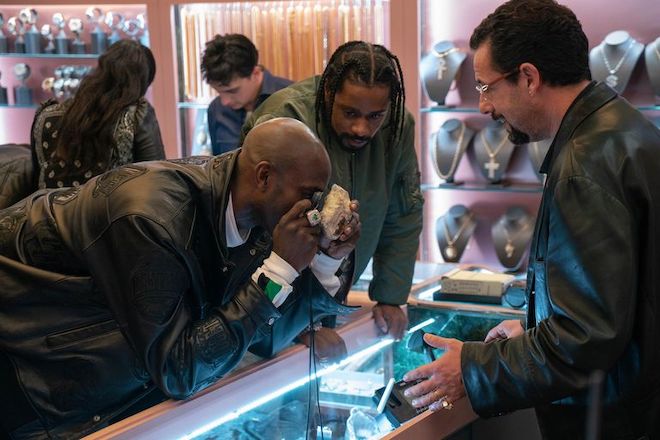 With none two exactly alike, the multi-hued darlings of high jewellery having been gaining in popularity during the last five years as high profile luxury marques like Dior and Louis Vuitton made full use of its scintillating colours and its ever changing countenance.

With a technicolour palette, jewellery designers like Victoire de Castellane have crafted a captivating array of high jewellery creations from the least celebrated stone (relative to diamonds, rubies and sapphires). The French jewellery designer started her career alongside Karl Lagerfeld at Chanel, overseeing the house’s costume jewelry designs for 14 years but since she joined Christian Dior as creative director of the brand’s fine jewelry division, opal has been a feature for Dior jewellery for over the last 20 years. “The opal is a very poetic stone, an invitation to enter a fairy tale, to experience magic”, says Castellane. 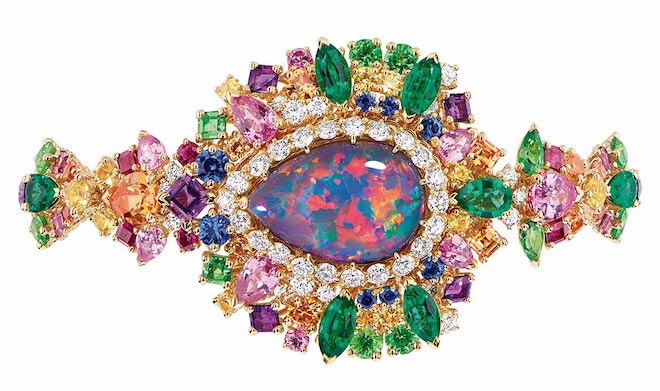 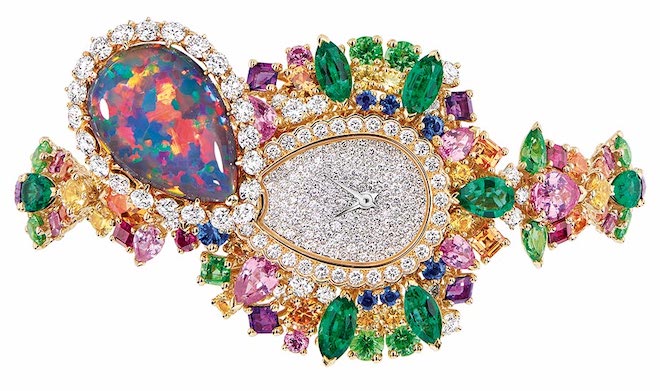 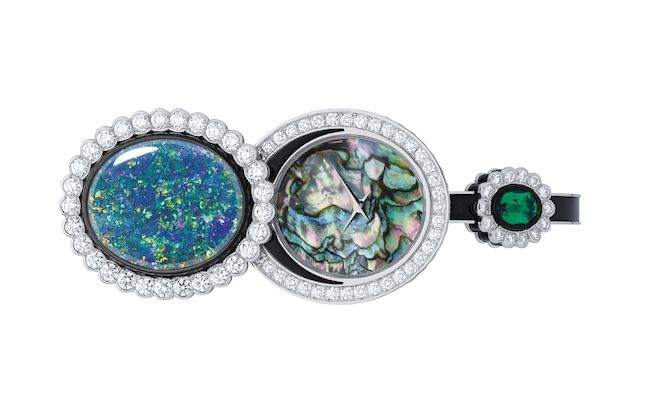 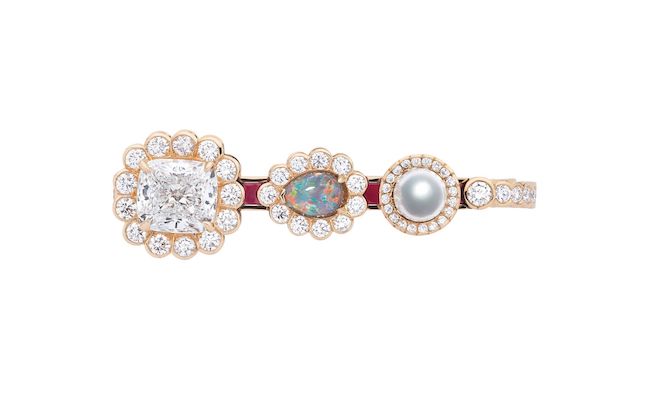 Each year de Castellane creates a High Jewelry collection and at least one Fine Jewelry collection for Dior Joaillerie; without fail, opals are used in one or more collections, she affirmed, “When I look at an opal, I feel like I’m seeing the earth from afar, the oceans, the archipelagos, and the reflections of stars on ocean waves… I see it as nature’s gemstone par excellence, a stone that’s so intertwined with femininity, its connection becomes organic.” 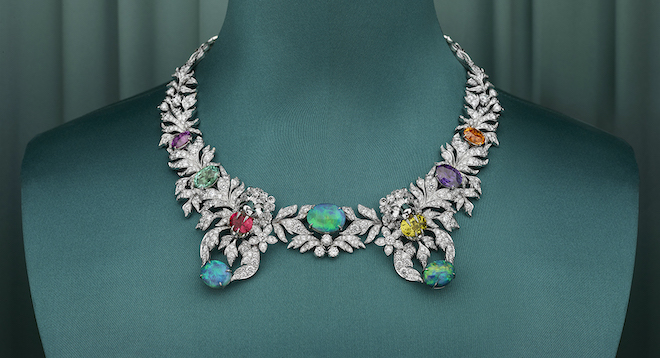 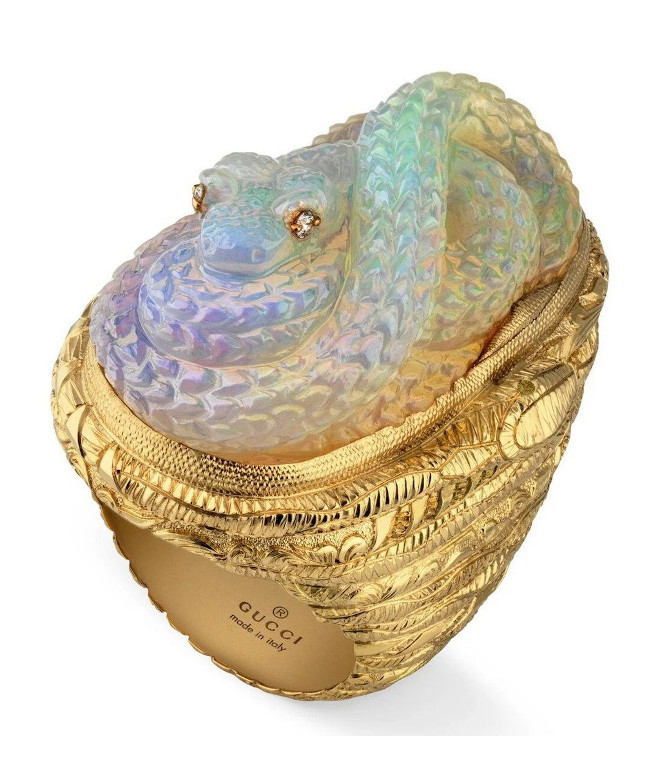 Louis Vuitton’s B Blossom collection also utilises opals but rather than take centrestage, allowing something like this 18-kt pink gold B Blossom chain bracelet featuring two sculptural Monogram Flower charms to play to the nascent tend of silent luxury rather than boast of the fluorescence typically associated with brighter variants of opal. On the Louis Vuitton B Blossom charms: one crafted from white mother-of-pearl framed in gold, the other is composed of brilliant diamonds set with two half-spheres of pink opal. Feminine and fresh, the opal as interpreted by Louis Vuitton showcases an exquisite yet subtle bijoux whether worn alone or styled with other Blossom jewels. 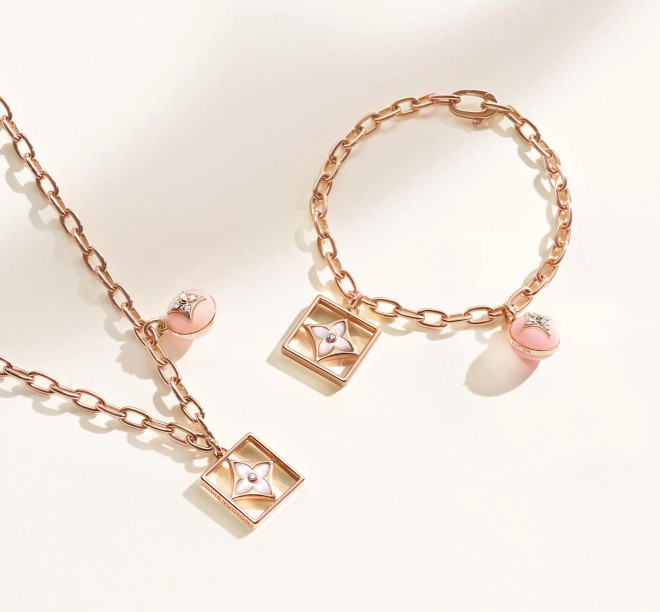 That’s not to say that Louis Vuitton can’t do grandiose: the Acte V high jewellery collection is all about escapism. Considering the record-breaking auction set by the recent Cartier Tutti Frutti sale, it’s not altogether inconceivable that a glorious bauble is just the thing needed to distract you from the current state of melancholy that has gripped the world, especially one where you can’t travel. Bringing pristine Capri and the Tyrrhenian Sea to you, Louis Vuitton Acte V the Escape collection vividly captures the colours of the world famous Blue Grotto – Capri’s famous underwater cave – by surrounding mysterious black Australian opals with sparkling waves of diamonds; on The Escape Capri ring, you get to enjoy a crystallised slice of the Tyrrhenian Sea. 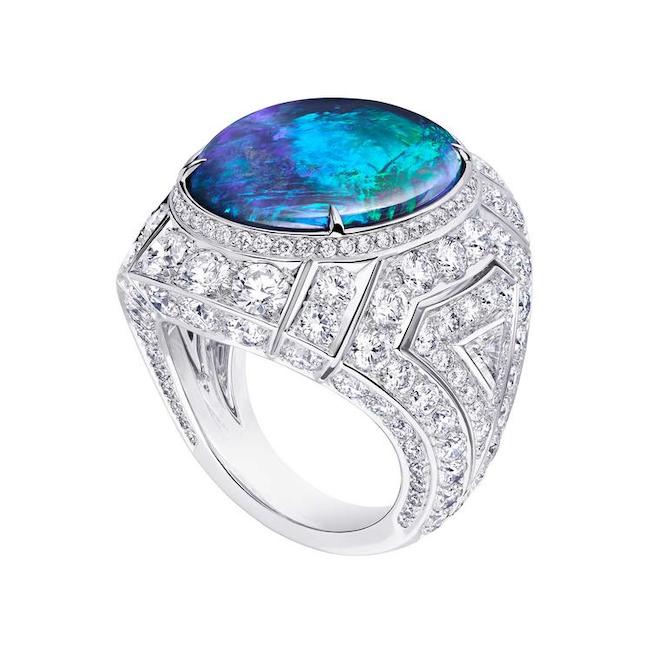 The black opal at the centre of this Louis Vuitton Acte V/The Escape Capri ring is like a crystallised slice of the Tyrrhenian Sea. 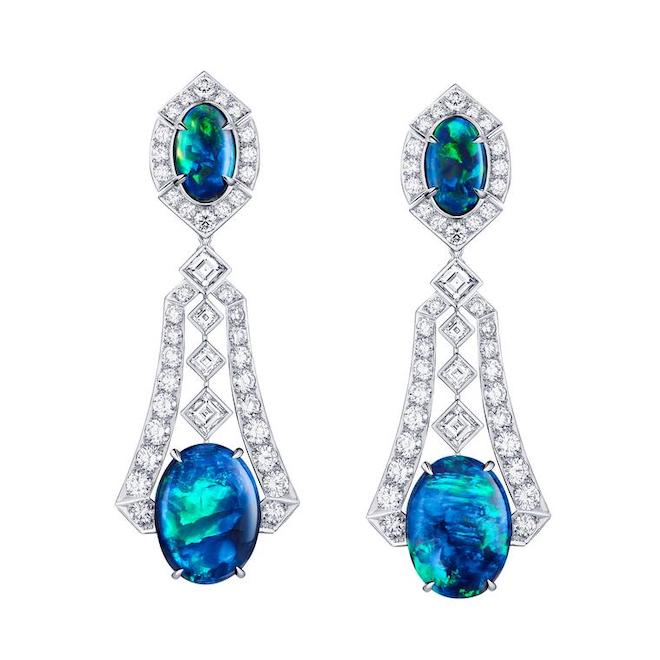 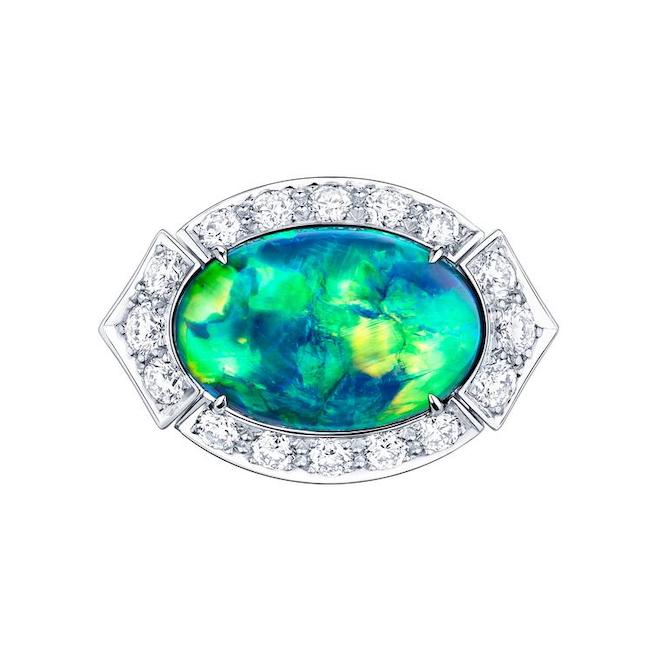 Emphasised in the 2015 Cartier Étourdissant Collection and reaching peak fervour in the 2019 Magnitude collection, Cartier use of opal in its high jewellery, was recently headlined with a spectacular matrix opal. The particularly large opal was a highlight of Cartier’s latest high jewellery collection, and much like Ratner’s idea of the perfect opal – the polished earthy brown pebble of magnitudinous proportions, exhibited veins which pulsed with a tantalising pattern of blue and purple luminance, further embellished with blue and purple sapphires. 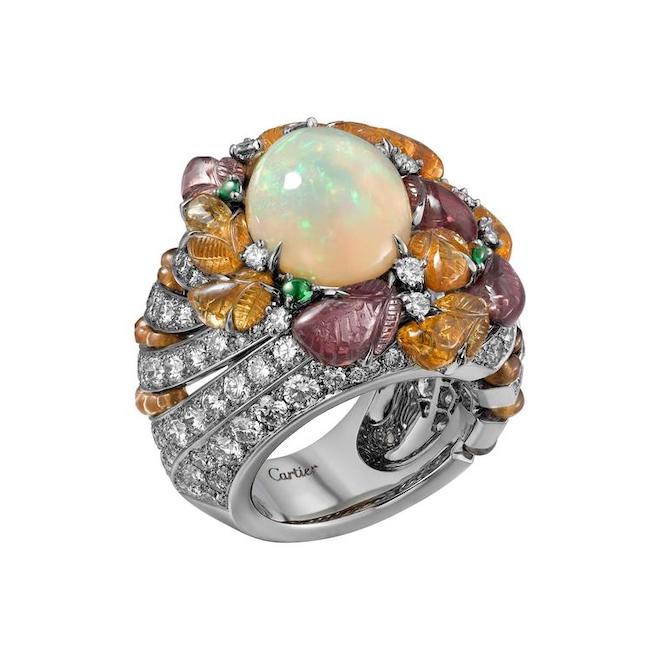 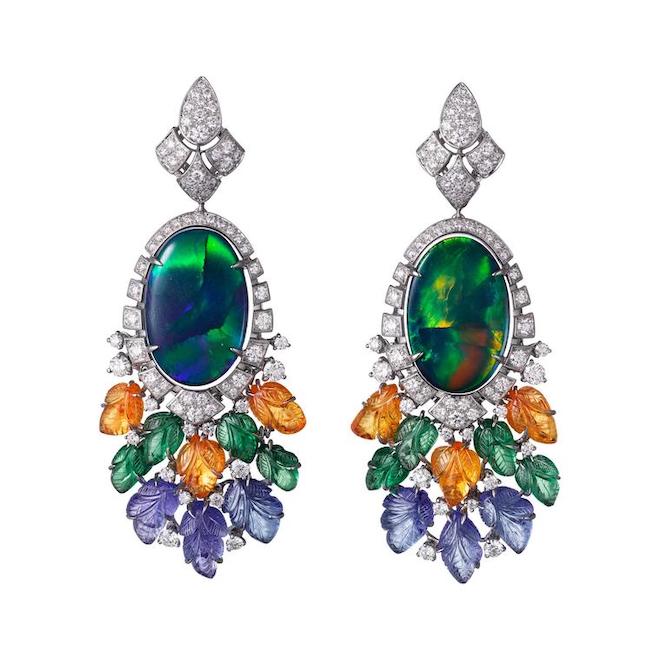 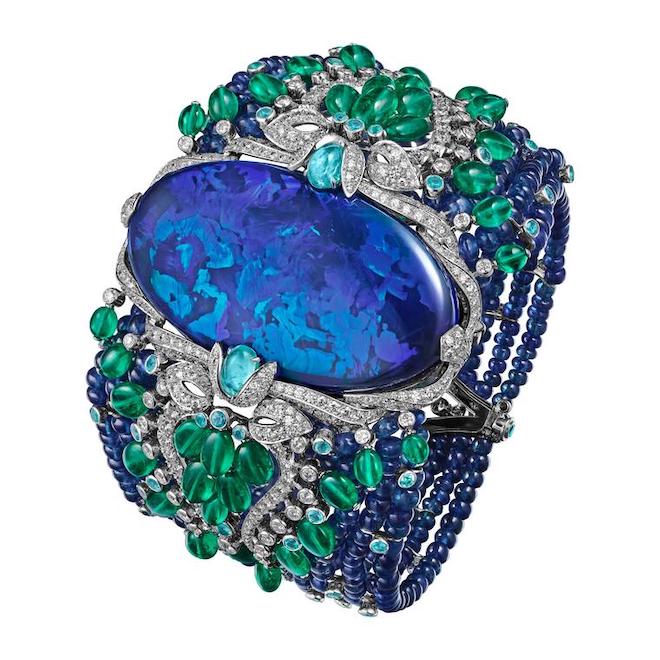 The uncut black opal of the titular movie, still in its matrix, mined in Ethiopia drives Ratner to ever increasing mania believing that his million dollar valuation will redeem him and solve his life’s money problems; but what we see, in these exotic creations is likely what pro-basketballer Kevin Garnett saw – the diamond might be the result of immense pressure over the course of 1 billion and 3.3 billion years in the Earth, but what the opal represents is something larger. Despite its relative value, the opal is the stuff of exploding stars, the widespread presence of silica on Earth is no surprise, silica dust has been found throughout the universe and in meteorites that predate our solar system. Opals are a glimpse of the universe and now a reminder of near-eternal ephemerality set within earthbound haute joallerie.

Rick Ross Fined for Labor Law Violations at Mississippi Wingstop Locations
New Gel-Based Artificial Cartilage Might Eliminate the Need for Total Knee Replacement
Sunak and Truss promise to increase scrutiny of Scottish govt as they face Tories in Perth
Opening Statements in R. Kelly Chicago Case Include Allegations of Sex with Kids
‘It looked like it was the worst day of his life’: Who is Salman Rushdie attack suspect?