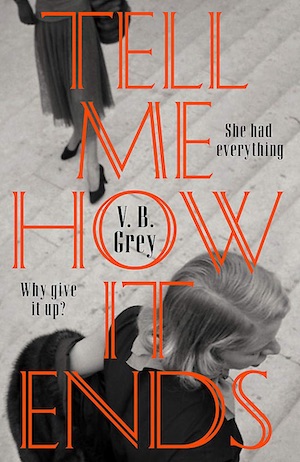 England in the early 1950s must have been a pretty grey and dismal place to live. The country was still recovering from World War II, and rationing didn’t end until 1954. No wonder, then, that the 1960s were ‘swinging’ as a new sense of freedom swept the land.

In the centre of that maelstrom of colour, pop music and snazzy fashions is Delia Maxwell. She’s a huge singing star with an army of loyal fans – and she’s missing. We’re in London in the Spring of 1963 and when Delia vanishes just as she’s about to sign a lucrative contract for a big Hollywood movie, her record company is worried.

Company boss Peter Jenks calls in the services of Frank Landry, an old RAF pal, in the hope of finding his errant star. Delia has always been so reliable and he’s worried – can Frank find her before the press get wind of the story? Peter signs Frank up as his new head of security and tasks him with uncovering Delia’s whereabouts. It’s while he is searching for clues at her London home that he meets Lily Brooks, a teenager who has been helping Delia out as a sort of personal assistant.

Lily maintains that she has no clue as to Delia’s whereabouts but Frank gets the feeling she’s hiding something. No matter though – because when Delia suddenly makes a surprise reappearance, it’s time to take stock and recalibrate. If abduction isn’t the misdemeanour in this crime novel, then what on earth is?

Four letters sum it up – L.I.L.Y. This young woman isn’t the wide-eyed innocent first appears to be, and soon she’s bending the truth and having things all her own way after wheedling herself into Delia’s affections. Frank isn’t fooled though, so he decides to dig deeper. What he discovers puts a whole new complexion on everything…

Immerse yourself in London in the swinging 60s in this meticulously researched novel that manages to capture the era with pinpoint accuracy. All the ingredients are here, with music taking a leading role in this technicolour production, but the ground-breaking fashions, casual misogyny and even more casual drug taking of the decade are also here in spades.

Don’t expect a hard-boiled approach to the narrative though. This author paints her pictures with lighter strokes, and there’s even a romantic aspect to it all. But those multi-layers work well, and whether you side with the more sedate Delia or devil-may-care wild child Lily, you’re destined to have those perceptions skewed as things move along and past misdeeds are revealed. World War II may be over, but for some people it will never end.

VB Grey is a TV screenwriter and those skills certainly cross over into this book. All the characters fix themselves firmly into the imagination and the dialogue is crisp and true to its era, with the result that it sometimes sounds a little stilted to modern day ears. In truth, I didn’t really warm to either Lily or Delia, but Frank was a different kettle of fish and I particularly enjoyed the chapters written from his point of view. Like the leading female characters, he is someone with a past that haunts him and in his case it makes him all the more relatable.

Tell Me How it Ends is an interesting foray into recent history that’s likely to appeal to fans of a more subtle strand of psychological thrillers. It’s an engaging novel and would make an ideal book for a some relaxed summer reading. And no, I won’t tell you how it ends!

There’s a showbizzy theme to Louise Beech’s latest release, I am Dust, while John Guzlowski’s Little Altar Boy will also transport you back to the 1960s.