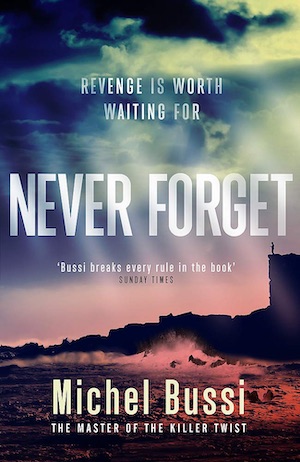 Translated by Shaun Whiteside — With its release timed to coincide with the UK’s first French Book Week and Bastille Day, Never Forget is French crime author Michel Bussi‘s latest suspense thriller and the fifth to be translated into English.

Jamal Salaoui has a goal – to run the toughest race in France, the Mont Blanc Ultra-Trail, a 68k run which takes around 46 hours to complete. The difference is that Jamal will do it with a prosthetic leg.

One morning while on holiday in Yport, Normandy, Jamal runs his usual morning route, the coastal path along the cliffs and notices a red scarf tied to a fence. When he realises it’s a pure cashmere Burberry scarf worth a small fortune, he takes it and carries on running.

As he approaches the blockhouse he notices a young woman standing less than a metre from the cliff and cautiously approaches her, assuming she is going to jump. When he hands her the scarf to hold on to, he’s convinced he’s saved her – until, with a single tug, she pulls it from his grip and plunges 120 metres to her death.

When Jamal reaches the pebble beach below, her body lies lifeless with the scarf wrapped around her neck. Only two other witnesses, Denise Joubain and Christian Le Medef, were on the beach and saw the woman fall. Jamal insists that the death was a suicide, yet no-one else can confirm it and his DNA on the scarf renders him a suspect.

Bussi conjures up the ideal underdog – a disabled Arab kid from Paris who works as a handyman at an asylum called the Saint Antoine Therapeutic Institute of Bagnolemental. He’s someone who will be judged by his race and appearance.

The events surrounding 19-year-old Magali Verron’s death are told by Jamal, the perfect unreliable narrator. Right from the start he toys with the reader. He draws us into his cause, guilt trips us into listening to his story and convinces us of his status as an innocent bystander. Our inherent nature to root for the underdog leads us to believe him, but Jamal’s taunting, sometimes ambiguous comments and brief glimpses into his true character suggest otherwise. He comes across as a womaniser, a charmer who hands out business cards to women on the street, using pickup lines to lure them into his bed.

His first description of Mona Salina, the girl he met at the police station and promptly started a physical relationship with, is as follows:

“With her bright black eyes and little turned-up nose, she reminded me of a shrew. All she needed was some ﬁne nylon whiskers protruding from the freckles on her cheeks.”

Yet, he falls instantly in love with the woman he tried to save on the cliff and for the most part he is ridiculously infatuated with her, based purely on her appearance: “I have never seen such a beautiful woman. Her features would be imprinted on his memory for ever: the perfect oval of her face, framed by twin cascades of jet-black hair, her coal-black eyes and snow-white skin, her eyebrows and mouth forming thin, sharp lines, as if traced by a finger dipped in blood and soot.”

This superficial infatuation surfaces on many occasions throughout the story and only accentuates Jamal’s weak and impressionable nature, which makes him appear more and more insincere and unlikeable. Our sympathy diminishes and he feels less and less a victim.

Jamal might be playing mind games with us, but someone is doing the same to him. Shortly after Magali Verron’s death he starts to receive anonymous envelopes containing information about two other women’s deaths dating back to 2004. Evidence of the sender points to Mona, yet she is the only person who believes and supports him. The envelopes contain newspaper cuttings, as well as confidential police documentation detailing the history and circumstances surrounding the deaths of Morgane Avril and Myrtille Camus, which bear an uncanny resemblance to that of Magali Verron’s. Both were found at the bottom of a cliff with a red Burberry scarf wrapped around their necks and evidence of rape. Could the red scarf serial killer be back to finish what he started?

When the only two other key witnesses, Christian Le Medef and Denise Joubain disappear into thin air as if they never existed, Jamal begins to question his own sanity – as do we. Jamal’s theories as to who killed the three women unravel as quickly as his mental state.

Bussi likes to flesh out his characters, whether it’s a colourful description of their physical appearance or their detailed back stories. There are no one-dimensional, cardboard cut-out characters. Carmen Avril, Morgane’s mother, is a strong woman. Characters such as Frédéric Saint-Michel, Myrtille’s fiancé; Ophélie Parodi, the girl Jamal befriends at the asylum; Océane, Morgane’s sister; and André Jozwiak, landlord of the Hotel-Restaurant Sirène, are all fully fledged, larger than life pawns in this twisted tale.

At just shy of 400 pages Never Forget is a bit long-winded in the second half and you might scowl at Bussi for leading his characters and readers on a wild goose chase. He takes more twists and turns than a road through the Alps, and his skilful narration will leave you in awe, but also rather disorientated. Yet, he excels at building suspense and constructing a complicated plot that will reward your patience.

In the end, Never Forget is a brilliantly entertaining crime novel which will both perplex and captivate its reader.

We’ve covered a lot of French crime fiction here on Crime Fiction Lover and you can discover it here.