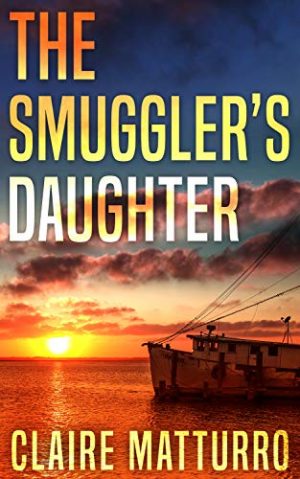 Avoiding the beach this summer? Missing sand and surf? Claire Matturro’s crime thriller set on Florida’s Gulf Coast will take you there. You can soak up the atmosphere while her protagonist, Kate Garcia, gets into some mighty deep waters.

Kate has a boyfriend who wants to marry her. Raymond Slaverson is a police detective in the town of Concordia and he and his partner are investigating the fatal shooting of state attorney Alton Weaver.

Kate is the head reference librarian at the county library and the fifth generation of her family to live on the Gulf Coast. She’s up in arms about a phosphate mining operation’s plans to open up a major facility likely to become an environmental disaster. An environmental activist working against the mine turns up dead around the same time Weaver does. It takes a while to start looking for a possible connection between these two deaths, and if there is one, it isn’t easy to spot.

These bodies are barely cold when a local real estate lawyer who hopes to expand into land use and environmental issues is murdered in his garage. Why would such a low-profile attorney became a murder target?

As these investigations lurch along, Matturro does a good job describing the characters involved and their peculiarities, both good and bad. As an example, their only suspect in the death of the real estate lawyer is a disgruntled former client – a venomous Florida cracker who lives in a trailer with a trio of vicious dogs. On the good side are Slaverson’s partner’s family and a young detective named Dayton. The veteran detectives don’t trust him yet, but Dayton is determined to investigate and ingratiate.

Kate learns that the murdered state attorney had been using the library’s newspaper archive the day before he died. And he isn’t the only one lately who’s been accessing that same old microfiche reel. Curious as to what Weaver and others are looking for in the Tallahassee newspaper from 1972, she narrows it down to the story of a young couple murdered at a remote spot on the shore called Bald Point. Back then, Florida’s Gulf Coast was prime marijuana smuggling territory, and speculation at the time was that the teenagers had stumbled upon a gang of drug smugglers, but the case was never solved.

Kate knows more than she wishes she did about that old case, and what she knows may end her relationship with the straight-arrow Slaverson. He’s asked her to marry him, but she’s afraid he’ll break up with her if he learns the truth.

Instead of shoring up that relationship, she focuses on her environmental concerns and reaches out to a local corporate officer of the phosphate company, Morgan McKay. He turns on his smarmy charm, determined to wine and dine Kate and, ultimately, it seems, persuade her to abandon her campaign against the company. Her susceptibility to McKay’s flattery doesn’t seem consistent with her character.

The past has become inescapable for Kate and maybe even dangerous, as people interested in those old murders have become targets. She reconnects with her boyfriend from long ago, Nicky, thinking to warn him. Nicky now lives in Tallahassee, having adopted a new name. The middle section of the book details the events of 1972 that culminated in the teenagers’ deaths and now pose a deadly risk to Nicky and Kate.

The recreation of the events of 1972 is strong and full of tension. The callous, desperate people involved seem just the type to have long memories and a strong sense of self-preservation, using the violent means they know best.

Though Kate worries about the danger to Nicky, her actions only increase the danger to herself. This sets up the ultimate confrontation between her and the former smugglers, who’d rather not be tied to murders, past or present. While such a climactic encounter is standard in thrillers, Kate’s behaviour enabling also seems unrealistic. Plus, there’s a bit too much explaining at the end. Matturro may have thought it necessary because of the complicated plot but should have trusted her readers more.

Overall, I enjoyed this book and its interesting, well-developed characters. The plot is strong, and the author does a great job with the setting. A great way to take yourself down to the water while staying at home.