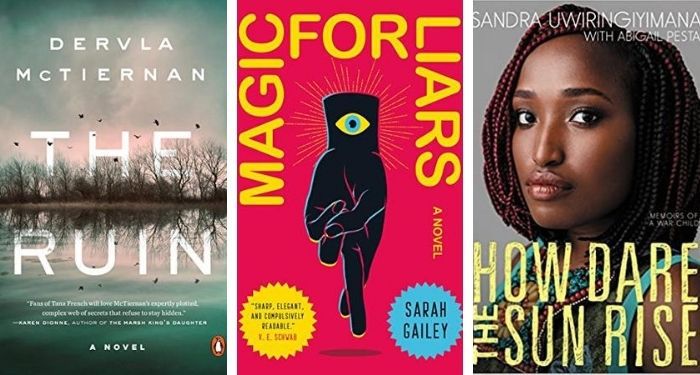 Blue Monday by Nicci French for $1.99

Marcus Off Duty by Marcus Samuelson for $1.99

Other Minds by Peter Godfrey-Smith for $2.99

God Help the Child by Toni Morrison for $1.99

A Kind of Freedom by Margaret Wilkerson Sexton for $1.99

Blood Orange by Harriet Tyce for $2.99

The Light Between Oceans by M.L. Stedman for $2.99

Remarkable Creatures by Tracy Chevalier for $1.99

Welcome to Lagos by Chibundu Onuzo for $1.99

River of Teeth by Sarah Gailey for $3.99

Dorothy Must Die by Danielle Paige for $1.99

Dark Tales by Shirley Jackson for $1.99

The French Girl by Lexie Elliott for $1.99

A Love Hate Thing by Whitney D. Grandison for $1.99

Under the Udala Trees by Chinelo Okparanta for $2.99

All Out: The No-Longer-Secret Stories of Queer Teens Throughout the Ages by Saundra Mitchell for $3.99

The Pillars of the Earth by Ken Follett for $1.99

X: A Novel by Kekla Magoon and Ilyasa Shabazz

Sick: A Memoir by Porochista Khakpour for $2.99

A Witch in Time by Constance Sayers for $2.99

The Rules of Magic by Alice Hoffman for $2.99

A River in Darkness by Masaji Ishikawa for $1.99

Younger by Pamela Redmond for $1.99

Vita Nostra by Sergey and Marina Dyachenko for $2.99

Marina by Carlos Ruiz Zafon for $2.99

The Astonishing Color of After by Emily X.R. Pan for $3.99

Monstress Vol. One by Marjorie Liu, Sana Takeda for $4.99

Chocolat by Joanne Harris for $1.99

The Tattooist of Auschwitz by Heather Morris for $3.99

Court of Fives by Kate Elliott for $0.99

There Will Come a Darkness by Katy Rose Pool for $2.99

And Then There Were None by Agatha Christie for $1.99

Not So Pure and Simple by Lamar Giles for $1.99

Sawkill Girls by Claire Legrand for $1.99

The Undoing of Thistle Tate by Katelyn Detweiler for $1.99

Strange Practice by Vivian Shaw for $4.99

Invisible Man by Ralph Ellison for $2.99

Tell the Truth & Shame the Devil by Lezley McSpaddena for $0.99

The Mermaid, the Witch, and the Sea by Maggie Tokuda-Hall for $4.99

Brown Girl in the Ring by Nalo Hopkinson for $2.99

This Book is Anti-Racist by Tiffany Jewell and Aurelia Durand for $2.99

Amazon to acquire maker of Roomba vacuums for roughly $1.7 billion
After His Friendship With Kevin Hart Was Declared A Conspiracy, The Rock Had A Classic Response
NASA’s Mars Reconnaissance Orbiter Spots “Ear” of the Red Planet
Beyond Meat cuts revenue outlook, says it’s trimming workforce
Ethereum just pulled off its final test run ahead of one of the most important events in crypto