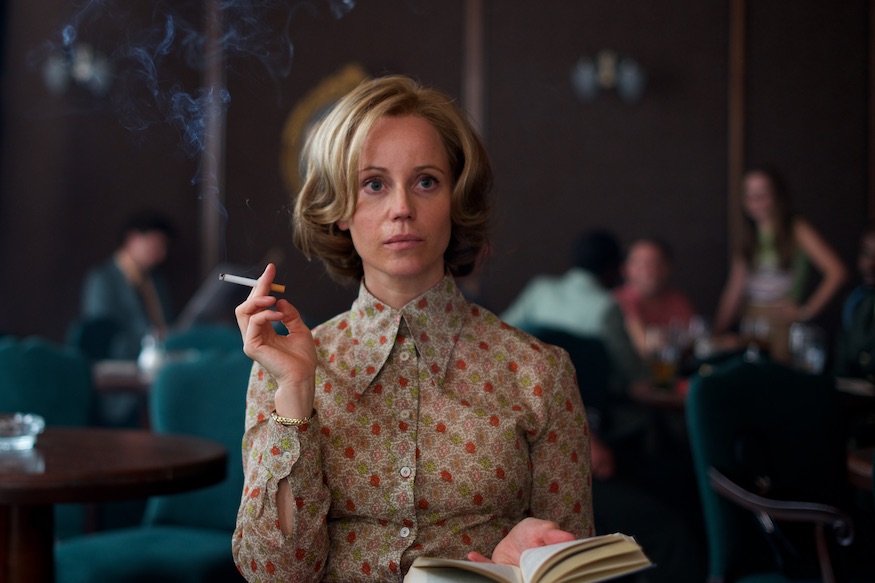 Get ready because on 23 October Sofia Helin – famous for her role as Saga Noren in The Bridge – will be appearing in a new German spy drama as More4 airs The Same Sky at 9pm in the UK.

This time out, Helin plays Lauren Faber, a NATO intelligence analyst working at a listening station in West Berlin. Lauren is the target of a Romeo operation staged by the Stasi, with freshly graduated agent Lars Weber (Tom Schilling) crossing from East to West and attempting to seduce her. It’s not the vulnerability of the state secrets that brings about the tension in The Same Sky, but that of the characters involved. The emphasis is on the drama more than the espionage.

The Same Sky is an intelligent, slow-burner that will bring you into the lives of its characters and then snap you into the realities of the Cold War, with plenty of thrills and danger. Lars sets out as a young idealist who wants to impress his father by serving the German Democratic Republic. This comes ahead of his morals, at first. His father, in turn, is a socialist who is petty enough to snitch on his neighbours if their TV aerial is pointing towards the West. Lars’ niece Klara is in the East German swimming programme, with a natural talent that might just be boosted by performance enhancing drugs.

On the other side of the Wall, Lauren is struggling emotionally. Her husband has left her and her teenage son Emil is a secretive pot smoker who supports the Red Army Faction. Little does he know that a real Communist is buzzing around his mother. Meanwhile, Lauren’s work colleague Sabine (Friederike Becht) is curious about the fresh-faced young man showing an interest in Lauren. Will this mean two chances to infiltrate the listening station, or double the likelihood of getting caught?

But stalking on both sides of the Berlin Wall is Lars’ handler, Ralf Müller. Like all Stasi veterans he’s a chain smoker with a big moustache who wears a leather car coat and takes an unhealthy pleasure in listening in on his young charge’s encounters. If you were the border guard at a checkpoint you’d clock him for a spy in a second, but Ralf roams to and fro with his long lens cameras and wads of Deutschmarks.

Filmed in Prague, period accuracy is something The Same Sky seems to specialise in. East Berlin is not grey and barren – it too was growing in wealth, supplying manufactured goods to the Soviet Empire. It’s just that West Berlin is even richer, with the latest Volkswagens and Mercedes cars a step up from the Trabants. The flat Lars is given in the West is nothing like what his family have in the East – but wealth and love aren’t everything, if you’ve got an ideology. Oliver Hirschbiegel, the director of The Same Sky, would know. He grew up a committed Communist in West Germany in the 1970s and took part in youth wing visits to meet East German pen pals.

After The Same Sky episode one airs on More4, all episodes will be available as a box set on Walter Presents. It aired in Germany in 2017.

Sofia Helin recently appeared in Mystery Road on BBC Four. Also see Deutschland 83 and 86. The Same Sky is already available on Netflix in some territories.