Introducing Zig-Zag to the Rap Scene

For those whose Spotify Wrapped 2020 features rap as your top genre for the year and Snoop Dogg and Eminem were in your top five artists, allow us to suggest a similar rapper you’ll love: Zigadies Shaffer, better known by his rap 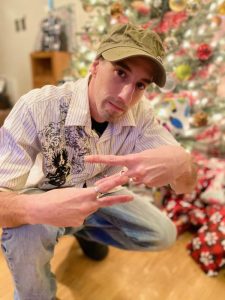 name, Zig-Zag. His rap style is comparable to Snoop’s newer music but with the speed of Eminem’s raps. This new and upcoming artist from Wrapped and Tightly Twisted Productions’ debut album, Smoke and Mirrors, will be released on February 14, 2021. The energetic, fun, and dark album features the hit-single “Don’t Forget Me” ft. Samantha Lee.

Every musical artist has their inspiration, and Zig-Zag is no different. He cites Minnesota rapper, Sean Daley, also known as Slug, from the hip-hop duo called Atmosphere as his main source of inspiration for his beats and style of rap. The concept for many of Zig-Zag’s music videos were influenced by English film director, producer, and screenwriter, Sir Alfred Hitchcock. Zig-Zag’s music video for “Don’t Forget Me” follows the Hitchcockian style of filmmaking by framing shots to generate suspense and allude to violent acts while allowing the audience to imagine the rest. “Don’t Forget Me” alludes to the suicide that occurs in the video’s plot without showing the act or the aftermath on screen, allowing the audience to imagine all the gruesome details, if they choose. The dark style of Zig-Zag’s rap genre is also largely influenced by “The Phantom of the Opera,” as it’s his favorite opera and often finds himself lost in the story.

Zig-Zag’s music is not for the faint of heart, as his lyrics tend to focus on adult themes and use explicit language. His single “Don’t Forget Me” featuring Samantha Lee details his battle with depression and suicide. This song details the battle with depression and suicide that many experience and lets its listeners know they’re not the only ones experiencing these. Samantha Lee’s haunting voice repeats “Please don’t forget me” between verses as Zig-Zag’s lyrics detail his struggle. “My demons needed me, and I can’t get them to stop. It’s like they’re ticking off the clock until my heart stops; knowing I’m leaving, heart’s throbbing. Their life will go on, and over time, I will surely be forgotten. No mortal man can stand the test of time. I’ll extinguish mine without making a dime.” raps Zig-Zag in the second verse. The Halloween themed music video ends with the number for the National Suicide Prevention Hotline, 800-273-8255, and is currently his biggest release.

On December 13th, his two newest songs, “Last on Your List” and “Toxic” ft. Morissa Schwartz, will be released on his YouTube channel. “Toxic” was inspired by how Zig-Zag perceives his work-life balance regarding how his music career affects his family. In an interview, he mentioned he discussed the content of his single “Don’t Forget Me” with his wife and children after seeing how it negatively affected them. “I’m toxic, making myself the main topic, driving force in my own conflict, being the main love, then making them homesick. Rose petals shrivel up and die when I’m around, like oil seeping into the ground.” he says in his new song.

“Last on Your List” ft. Exe Beats is Zig-Zag’s official declaration to who he is in the music industry. “I’m the hidden gem, the thorn in the stem, tomcat of rap doing big dogs in with stars in my eyes and a [explicit]-eating grin,” he declares in his new single. The song combines Zig-Zag’s propensity for nonconformity with the concept of traditional corporate America personified in Exe Beats. The music video, infused with psychedelic vibes, explores the proletarians’ frustration with the proverbial golden noose every present within a capitalistic society.