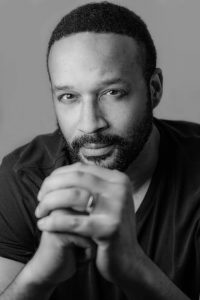 From inner-city Boston to being a semi-finalist on NBC’s “Last Comic Standing” to being named one of the five Sexiest Men in New York by the New York Post to becoming a number 1 bestseller on Amazon with his debut book, the career of Cyrus McQueen has been nothing short of extraordinary. After earning his degree in political science at Northeastern University in Boston, he never imagined he’d become a comedian but chose to do so to communicate. Studying American politics, how politicians are wired, connections between past and present politicians and leaders, and the history of socio-political movements influenced his style of comedy which mainly focuses on high octane discussions and criticisms of politics and racial relations.

Since his comedic career began in 2009, political humor has always seeped into his routines. His first joke ever told onstage was an impression of the newly-inaugurated President Obama desperately scouring the Oval Office for cigarettes. This comedian is ubiquitously known for his impressions, high energy onstage, and ability to explore uncomfortable subjects during his routines. A recurring theme in his comedic repertoire highlights his interracial relationship. From impressions of prominent cultural icons, such as Samuel L. Jackson, to discussing the Black experience in America, McQueen’s comedy routines are memorable for all audiences.

In 2016, McQueen transitioned from stand-up comedian to political and cultural critic combatting the growing racial divide exacerbated by the Trump administration. Slowly the desire to perform on stage faded as he utilized his Twitter account to extinguish the racist wildfires spreading across the platform and devastating the nation. “I honestly didn’t see it as a conscious decision, especially since I’d been marrying comedy and social commentary for years, so using my Twitter to edify was purely instinctual,” says McQueen regarding his decision to transition from comedian to political activist. His Tweets, filled with wit and astute political observations, routinely go viral on the social media platform and earned him features in Variety, TIME Magazine, Huffpost, and Buzzfeed. 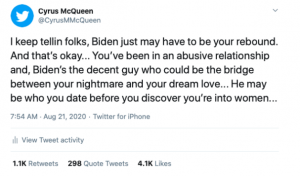 Enter the Political and Cultural Critic

As the Trump candidacy and administration emboldened bellicose racists to inundate social media platforms without fear of repercussions, McQueen joined the fray, combatting the misinformation that fluidly, unabatedly flowed from Trump’s speeches and Twitter profile. Twitter allowed McQueen to easily Quote-Tweet or reply to a Trump Tweet to call out whatever distorted reality the President crafted in 280 characters.

As he began his crusade against Trump’s misinformation, his rebuttals gained traction with many responding favorably to his comedic reactions to the President, with some of his popular Twitter jokes migrating into his standup routines. He quickly transitioned to responding with the simple truth whenever possible upon realizing some situations demand a more serious, sobering reaction. McQueen’s Twitter combines the sobering reality of the world with comedic effect to be both an informative and humorous voice on the platform.

In the wake of the 2017 Unite the Right Rally in Charlottesville, Virginia, McQueen first contemplated writing a book to further analyze the Trump presidency but was reluctant, as he knew the time constraints undergoing this task entailed. As his followers implored him to write a book, as magazines routinely published his Tweets, and as he received daily encouragement from his fan base, family, and friends, he decided these signs shouldn’t be ignored and began the arduous task of writing his first book in August 2018.

In the fall of 2020, McQueen announced his debut book, Tweeting Truth to Power: Chronicling our Caustic Politics, Crazed Times, & the Great Black & White Divide, would be available soon. The book details his personal experiences with racism as a Black man in the United States, and his personal anecdotes, which catalog the subtle and blatant acts of racism he experienced, will resonate with many readers of color while enlightening Caucasian readers to the reality of many Americans of color. The book also highlights his experiences as a comedian and details his transition from standup comedian to cultural critic.

Writing this book required McQueen to not only reflect upon the last four years but also on the last forty years of racial history, as his work discusses past and present racial tensions. In one section, McQueen details a conversation with his grandmother who highlighted the ironies of America’s participation in World War II. Our soldiers rose up to fight against racism and genocide while carrying the deadly disease of racism themselves and returning to a country that avidly supported segregation.

Social media has allowed various platforms to amplify and disseminate their message to a larger audience not possible prior to the digital age. Tweeting Truth to Power delineates the intersection of race relations, politics, civil rights, and social media in a time where social media is inundated with deleterious information regarding the ongoing pandemic, election results, and bigotry as well as social justice movements combatting racism, spreading awareness for movements such as #BlackLivesMatter, sharing petitions demanding justice for those killed by police, and disseminating vital information about the pandemic.

Social media and the ubiquitous presence of smartphones ready to document atrocious violations of human rights have exposed previously undocumented acts of violence. They fully reveal how scarily commonplace that particular evil is. In May 2020, a viral video allowed an international audience to watch an almost nine minute video as police murdered George Floyd. Many are already familiar with the fact police brutality and racism routinely combine with catastrophic consequences, but social media allows more to bear witness. “Black murder is chronic in America, only now the ubiquitousness of these crimes is matched by the ubiquitousness of those devices readily available to document them,” says McQueen.

With a vast amount of information circulating social media platforms, users find themselves thrust into an infodemic, while the hosting platforms and media outlets do little to mitigate the plague of misinformation. Some platforms began instituting labels identifying potentially misleading or false information, but these labels are not enough to curb the infodemic according to McQueen. When reading information online, one must distinguish between opinion, skewed opinion, and fact and locate reliable news outlets to receive factual information. Tweeting Truth to Power further discusses how social media’s inundation with fallacious information has chronically undermined reputable news sources. For those seeking reputable sources to receive their news, McQueen recommends using The New York Times, The Washington Post, NBC, NPR, and BBC instead of relying on less reputable sources, such as Facebook or viral Twitter posts.

The book incorporates McQueen’s Tweets wrapped in gorgeous prose littered with personification, metaphors, and light humor as it documents the atrocities that occurred under the Trump administration. McQueen wants to ensure these barbarous acts aren’t forgotten in the Trump amnesia, revisionist white-washing historical retellings that will sprout up over the next several years as this period of history is written about by the victors.

Racism is not a new malady within the United States but rather a cancerous disease that uses its remission periods to mutate into a more deadly disease that causes more destruction when the nation relapses. McQueen hopes his work, both in his book and on Twitter, enlightens his readers and that his experiences and perspectives on race, politics, and the dangerous trajectory this nation is on will resonate with as many as possible. “I am merely a conscientious objector doing his damndest to curb those destructive forces trying to erode the progress my people had to fight and die to secure. I will always speak truth to power, I will always tweet truth to power; I will always be that provocateur, that vocal conscience,” says McQueen.

In its first week on Amazon, Tweeting Truth to Power became a number one best-selling new release, and the Virtual Book Release event sold out within two weeks of ticket sales. McQueen’s work has cemented his role in the new wave of social justice movements designed to further racial equality. Despite living through a tumultuous administration that’s sole goal was to further the racial divide, McQueen wants to remind his audience to stay hopeful. The racist disease has long plagued this nation, but we must maintain our unbreakable resolve to demand change, regardless of any resistance. His book is available for purchase on Amazon here, and you can purchase a signed copy on his website.