Joe Biden has warned that the fight to bring coronavirus under control in the US is a “wartime undertaking” – devoting much of his first full day in office to tackling the pandemic.

The new president signed 10 executive orders on Thursday that are designed to ramp up testing, tackle vaccine shortages, and increase mask wearing nationwide.

Mr Biden has described the rollout of vaccines in the US as a “dismal failure so far”, and vowed to expand vaccine manufacturing in the coming weeks.

He also made a personal plea to the American people – telling them that experts believe more than 50,000 lives could be saved if the public wear masks for the next 99 days.

In other developments on Thursday:
• Dr Anthony Fauci, America’s top infectious diseases expert, suggested that coronavirus cases may be about to hit a plateau in the country
• New figures showed that a variant of COVID-19 first detected in the UK has now spread to at least 20 states
• Mr Biden said the US will back a global plan to get vaccines to poorer countries
• The new administration announced it will reinstate entry bans on most non-American citizens who have recently been in Brazil, the UK, Ireland and most of Europe
• The president’s top adviser on the pandemic said the US will once again contribute funding to the World Health Organisation – reversing Donald Trump’s plans to pull out
• Authorities in California, Ohio, West Virginia, Florida and Hawaii warned COVID vaccine supplies were running out – with New York City starting to cancel appointments 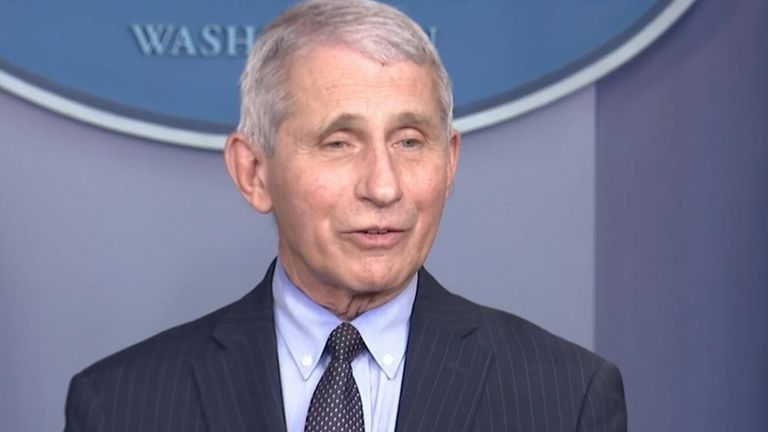 Dr Fauci: It was ‘uncomfortable’ working for Trump

Mr Biden has pledged to provide 100 million doses of the coronavirus vaccine during his first 100 days in office – and intends to open up eligibility to new groups including teachers and supermarket workers.

After being sidelined by Mr Trump, Dr Fauci returned to the White House briefing room on Thursday – adding that it was “liberating” to serve under a science-friendly administration.

But Downing Street has said it is unable to confirm when Boris Johnson will be in contact with the US president for the first time since he entered the Oval Office.

Analysis: What a difference a day makes
By Dominic Waghorn, diplomatic editor

What a change in tone – just one day into Joe Biden’s new administration.

War on science under Donald Trump has been replaced with an all-out war on the virus.

Cue the return of Dr Fauci – Dr Doom and Gloom, according to the former president’s team. To everyone else, he is the man best qualified to tackle the pandemic.

Dr Fauci’s insistence on scientific fact was so infuriating to Donald Trump that he was banished from giving briefings in the end.

He’s now centre stage as the Biden administration battles to bring the runaway virus to heel. At the White House, he told reporters it felt “liberating” to “get up here and talk about what you know, what the evidence and science is, and know that’s it – let the science speak”.

Dr Fauci smiled as he downplayed his frustrations with Mr Trump. It had been “uncomfortable” to watch the president recommend miracle drugs like hydroxychloroquine, he said.

It must have been excruciating.

Donald Trump seemed to resent Dr Fauci’s star status back in the spring.

The Trump administration’s Cnutian denial of scientific fact in the face of such a devastating pandemic will surely be one of its most shameful records. Instead of drawing on this expertise, Mr Trump fulminated that the doctor was probably a Democrat and allowed his staff to issue a dossier smearing his record – sidelining him and his unique expertise.

The doctor’s relationship with the new president seems a lot healthier.

“Everything we do will be based on science and evidence,” he’s been promised. What an idea.

We won’t see a president spouting quack remedies like disinfectant injections and night after night digging himself deeper and deeper into a pit of medical ignorance.

Instead, we will have clinical factual briefings with a man who knows more than any other about one of the gravest-ever threats to the US.

Dry and boring? In contrast with the antics of the outgoing president most probably. But most Americans will probably take boring right now if it starts saving more lives.