Nearly 70% of women in the United States wear a size 14 or above, yet mainstream media lacks adequate representation for fat or plus-sized women. More than 70% of men in the United States are considered overweight, but many male characters in the entertainment industry are not. When fat characters appear in films or shows, they often are a secondary character depicted in a dehumanizing manner, the main villain meant to make the main character more appealing, or the comic relief and punchlines of jokes. For example, the Marvel Cinematic Universe introduced “Fat Thor” in Avengers: Endgame: the obese Asgardian warrior the other Avengers routinely mock for his weight. The Little Mermaid features Ursula, a plus-sized mermaid, as the main villain. 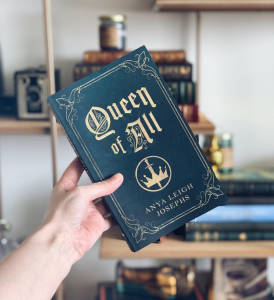 From debut author Anya Josephs’ series The Jena Cycle, Jena is a plus-sized heroine in a fantastical world filled with magical powers, ancient languages, and the inability to escape weight-based stigma, colloquially known as fatphobia. The first installment of the epic sword and sorcery YA fantasy series, Queen Of All, finds Jena battling feelings of inferiority and inadequacy while living around beautiful, thin people and having no high expectations for her future. When her gorgeous best friend, Sisi, receives an invitation to the royal Midwinter Ball, Jena decides to follow her into a new, dangerous world – all while trying to discover who she is.

This Bildungsroman discusses self-actualization, body image and positivity, and exploring your sexuality set in a world filled with secrecy and mystery. Sisi seeks to expose the Kingdom’s darkest secrets: their suppression of magic and the systematic extermination of those who practice it. Jena has a secret of her own: she is in love with Sisi. As she tries to help Sisi, Jena discovers how to bring the magic back and embrace her power.

Josephs was born in Massachusetts but raised in Chapel Hill, North Carolina, before earning her BA in English from Columbia University and her MA from UCLA. While working for the Dorm Project tutoring foster children pursuing their academic degrees, she fell in love with the social work side and enrolled in the Masters of Social Work program at NYU. When she’s not writing, studying, or working, Josephs loves attending the theatre, playing Dungeons and Dragons, and spending time with her cat, Sycorax, who she lovingly describes as a “nightmare child of pure, unbridled chaos.” Her work previously appeared in The Huffington Post, Poets Reading the News, and more. Her upcoming piece in Fantasy Magazine is releasing in May 2021.

Inspiration for the Series:

Greek, Celtic, Viking, Norse, or Roman mythology often inspire many fantasy series, but Josephs sought inspiration from Jewish mythology. The magical language in the series, known as the Old Tongue, is analogous to Hebrew. Growing up, she was obsessed with books that featured dragons or swords on their covers but often found herself excluded from these novels. Fantasy heroes tend to be thin yet muscular, heterosexual, abled, neurotypical, white men. Like many other writers of diverse backgrounds, to see a protagonist who looked like them, Josephs had to write one.

Think about the last time you read a book or saw a film where a fat protagonist is a hero. If the only example you can think of is Fat Thor realizing he can wield Mjolnir in Avengers: Endgame, you can understand why Josephs created Jena the way she did. Jena serves as a reminder that your weight does not prevent you from being the hero–she normalizes bigger bodies and questioning your sexuality.

Queen of All releases on June 8, 2021, but you can pre-order it here. Add Queen of All on GoodReads here

Black Friday shopping in stores drops 28% from pre-pandemic levels as shoppers spread spending throughout the season
Family of 14-Year-Old Astroworld Victim Sues Travis Scott, Live Nation
Bluegame BGX70 and Sanlorenzo SX76 Set Sail to Singapore
Adele’s 30 Is 2021’s Best-Selling Album in U.S. After 3 Days
With DogPhone, Your Canine Friends Can Call You Any Time for a Chat