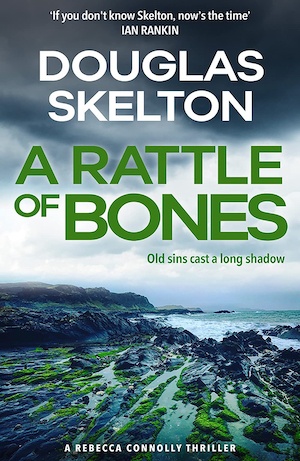 As well as a brand new novel by well-known Scottish author Douglas Skelton, this week’s On the Radar column introduces four authors we’ve never covered before. Please welcome Chris Hauty, Camilla Bruce, Linda Mather and Austin Brooks to the site, and check out their new novels as well. But we’ll get things underway with a little rattle of bones…

A Rattle of Bones by Douglas Skelton

Fans of Rebecca Connolly will be glad to know the journalist is back on 5 August. And as A Rattle of Bones opens, the reverberations are still being felt from her last appearance, which was in Douglas Skelton’s The Blood is Still. There’s a neat juxtaposition of Scottish history and modern day turmoil as Rebecca explores the case of a man who has been in jail for 10 years for the murder of his lover, who was a lawyer and prominent politician – and has protested his innocence from the get-go. She scents a story and, as fans of this series will know, once Rebecca has her teeth into an exclusive, she’s not about to back down – even if her life is in danger.
Pre-order now on Amazon

Movie screenwriter Chris Hauty returns with Savage Road, a political thriller which is out as a paperback on 5 August. There’s a hacker at the heart of the intelligence community, and they’re about to threaten the security of the USA. Never fear, covert operative Hayley Chill is on the case! She needs to work fast to stop the hi-tech terrorist, whose cyber attacks are causing havoc in Washington DC. But the deeper she digs, the more Chill realises that nothing is at it seems and no one can be trusted. Looks like she’s going to have to solve this one all on her own, but when things get personal, the usually calm agent is shaken to the core…
Buy now on Amazon

In a genre packed with books that have blood, death or girl in the title, it’s refreshing to find one that mentions trifles! There’s nothing run of the mill about this dark reimagining of the life and times of Belle Gunness, whose real-life killing spree began in Chicago in 1900. Bella Sorensen is a woman out to make a point – that the female of the species can triumph over the male. Bella begins a series of murders starting with her husband, Mads, in a frenzied effort to prove to the world that a woman can be just as ruthless, black-hearted and single-minded as any man. With its intriguing cover, Camilla Bruce’s Triflers Need Not Apply is out on 5 August.
Pre-order now on Amazon

The Hanged Man by Linda Mather

A private investigator and astrologer – who could have forecast that one? Jo Hughes is Linda Mather’s creation, and you can catch up with her on 3 August, when The Hanged Man is released. A girlie get-together in the treehouse at Jo’s Cotswolds home takes a macabre turn when the women spot a man hanging from a nearby tree. It’s Seb, the college financial director. What could have driven him to this? The college’s finances were in a parlous state but Jo is still not convinced that Seb committed suicide. With the help of David Macy, her old private investigator colleague, the truth begins to emerge and some of it is uncomfortably close to home.
Pre-order now on Amazon

In the Presence of Evil by Austin Brooks

A sheriff one step away from retirement and a rookie FBI agent are reluctantly partnered up in this fast moving crime/horror hybrid. Veteran cop Mike Walker is counting down the days when his retirement plans are brought to an abrupt halt by the arrival of kidnap victim Sheri Brooks. She’s managed to escape from her kidnapper, a member of a satanic cult – but when Sheri leads the police back to the compound where she was held, they’re not prepared for what is about to unfold. In the Presence of Evil by Austin Brooks comes out on 30 July
Pre-order now on Amazon