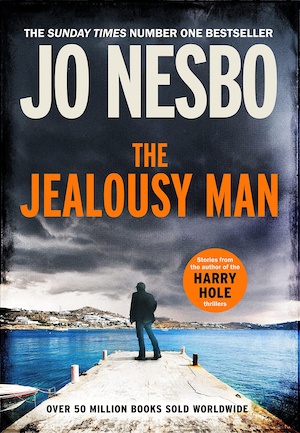 It’s an important week for fans of the Norwegian author Jo Nesbo as we announce the release of something new from him – a collection of short stories. Like his early Harry Hole novels, these stories are set in some sunnier climes but the style is expected to be Nordic. We’ve also got three historical mysteries this week – one set in Victorian Nottinghamshire, one in 1960s Brighton and one in 1980s Bristol. Plus, New Zealand author Paul Cleave is back with a new mystery with crime authors as its main characters, and main suspects…

The Jealousy Man by Jo Nesbo

We loved it when Don Winslow released a set of superb short stories in April 2020. Now the Norwegian bestselling author Jo Nesbo is doing the same. The Jealousy Man gives detective Harry Hole’s creator scope to play with different concepts away from the frigid environs of Oslo. Here we have stories set in a dystopian near future America, aboard a plane bound for London, and at the running of the bulls in Pamplona, Spain. There’s a psychologist who is an assassin, and a Greek detective who is an expert on the subject of jealousy. In fact, each story deals with this non-environmental green theme in some way. Pick it up on 30 September, or pre-order your copy with the link below.
Pre-order now on Amazon

The Midnight Hour by Elly Griffiths

The latest in Elly Griffiths‘ Brighton Mysteries series comes out on 30 September, and we’re immediately transported back to Brighton in the mid-1960s. Former music hall star Bert Billington dies at his retirement home and no one bats an eyelid until the post mortem shows he was poisoned. All fingers point to his wife, eccentric ex-music hall star Verity Malone, who calls upon private detective duo Emma Holmes and Sam Collins to prove her innocence. Luckily, they have a friend on the inside: Max Mephisto is filming a remake of Dracula, starring Seth Billington, Bert’s son. But when they question Max, he gets all cagey. Can the sleuthing pair get to the truth? See our review of the previous book, The Postscript Murders.
Pre-order now on Amazon

The Quiet People by Paul Cleave

We’re off to New Zealand for Kiwi writer Paul Cleave‘s latest release, which features a pair of crime writers who may not be all that they seem. Cameron and Lisa Murdoch have been out on a tour promoting their latest release, and the line that “no one gets away with crime like they do” gets a laugh out of the audience every time. But when their seven-year-old son Zach disappears, the police and public start to wonder if what Cameron and Lisa said was a joke after all. Are they trying to demonstrate how easy it is to commit the perfect crime? The Quiet People is out on 25 September.
Pre-order now on Amazon

The Shadowing by Rhiannon Ward

After the success of The Quickening, crime writer Sarah Ward gives her historical crime nom de plume another airing with The Shadowing, which is out now. Sisters Hester and Mercy live very different lives. Well-to-do Hester is shocked to the core when she learns Mercy has died in a workhouse in Nottinghamshire, and she travels there to find out more. It soon becomes clear that the official version of events is a fabrication – Mercy was pregnant and she and her baby apparently died of cholera… But the workhouse hasn’t had an outbreak for years. So what really happened? And who is the ghostly Pale Lady rumoured to steal babies in the night?
Buy now on Amazon

A Traitor to His Blood by MP Wright

Number five in the JT Ellington series (read our review of the first, Heartman, here) finds the former detective facing retirement. We’re in Bristol, it is 1980, and JT is a man haunted by ghosts. His fiancée has died, leaving him to raise his 15-year-old niece Chloe alone and he is battling to resist the temptations of his old life. But when the unscrupulous wife of a local preacher mysteriously vanishes, JT is persuaded to take on the search for the missing woman. As he steps back into the seedy side of Bristol, JT must fight for survival against the dark forces of Obeah, treachery and trauma. As JT is an immigrant from the Caribbean, the series is sometimes described as Windrush noir. A Traitor to His Blood is out now.
Buy now on Amazon

Everybody in the Red Brick Building
Former President Bill Clinton admitted to hospital with non-Covid related infection
Obongjayar Shares Video for New Song “Message in a Hammer”: Watch
Southend to become a city in honour of Sir David Amess – PM makes announcement as he leads tributes to killed MP
Adele Takes Back Rejection of Peppa Pig Collab, Says She Regrets It