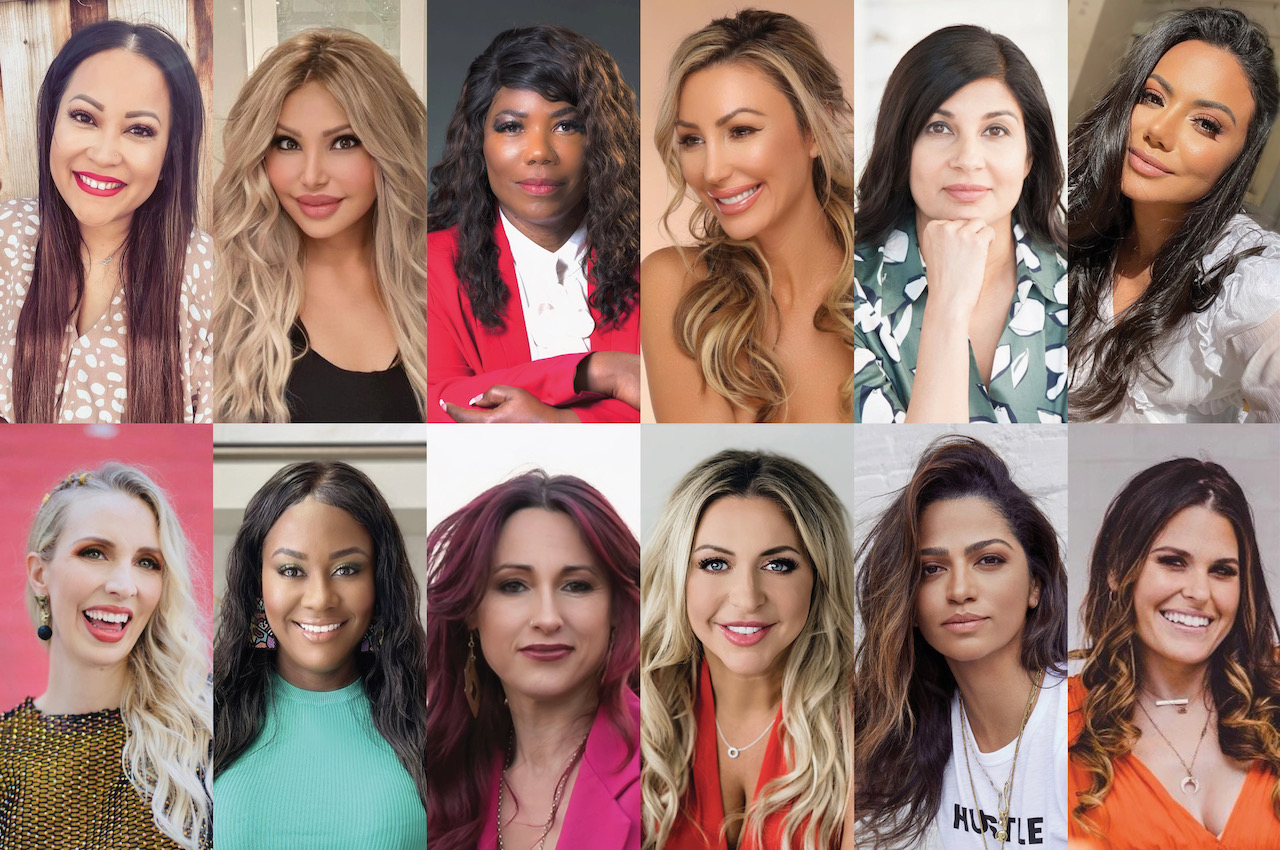 In a world where women are being marginalized and rarely supported, some women muster up the courage to get up, challenge the status quo, and make their place in the world. The following is the list, in no particular order, of 12 such strong and inspirational women to look for in 2022.

Jamie Villamor, @jamie_villamor, was born in Las Vegas, NV. This supermodel is also the co-host of the popular podcast Dating Intelligence. Jamie is a Sponsored competitive pistol shooter for Team Armscor. In April 2022, she signed on with Imperium Roots and signed with HoneyDrip.com; an emerging platform specifically focused on the empowerment of talented creators like herself. Apart from being a cover model and social media sensation, she is also an entrepreneur running her own business Vegas Bows Apparel. Jamie has appeared on the cover of several top fashion magazines, including Cosmopolitan, Glamour, and Marie Claire, to name a few. Jamie was also featured in Forbes for her competitive shooting. She is incredibly happy in her career and recently just started making knives this past year with Microtech and Marfionie Customs. We can’t wait to see what the rest of the year brings. 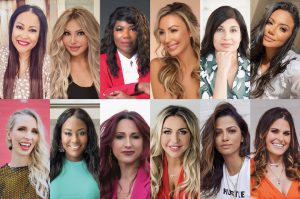 Babita Spinelli, @babitaspinelli is an internationally acclaimed award-winning psychotherapist, executive coach and relationship expert. Babita Spinelli received the New York Psychotherapist Award in 2019, the 2022 Health 2.0 Leadership Award and the 2022 Prestige Award for Psychotherapist of the Year. Her primary focus is to help people optimize their relationships, and examine and redefine them in a healthy way. Her corporate background as a former lawyer and executive brings a unique perspective to human dynamics and managing mental health issues in the workplace. As the CEO of Babita Spinelli Group, she extends her services to mental health consulting and wellness speaking nationally and internationally. She is the founder and Clinical Director of Opening the Doors Psychotherapy. Babita Spinelli has made appearances in many well-known media outlets, including SXSW, Forbes, ABC, NBC, CNN, Insider, Medium, MSN, HuffPost, Washington Post, Mind Body Green and Bloomberg.

Jessica Stavale, @TheEmpatheticWarrior, is a popular psychologist with an MS Clinical Psychology (Summa Cum Laude) who will start her Ph.D. this fall. She is also the holder of additional BS degrees in Dental Hygiene and Healthcare Administration. Jessica Stavale is a Disabled Veteran in the United States Air Force and the CEO of Fascia Revive. Jessica Stavale is a firm advocate for fascia health and a balanced and optimum relationship between emotions and the fascia system. This summer, she will release her much-awaited “Fascia Movement Practice”. Jessica has done considerable study and research on fascia and regularly writes about it on Instagram and other media outlets. She has also made a healing device that affects the fascia system and offers incredibly helpful cosmetic and health benefits to millions of people. Stavale also appeared on the Simonetta Lein Show (via SLTV) and provided the audience with extensive psychological insights on the basics of building a successful business. As a psychotherapist, she attempts to help people get over paralyzing traumas, depression, anxiety, and many other mental health conditions.

Simonetta Lein, @simonettalein, known as The Wishmaker, is among Forbes world’s top-most popular female fashion influencers. Simonetta Lein is the founder of the Wishwall Foundation, which inspires millions to get up, make wishes, and chase their dreams. She is the host of The Simonetta Lein Show (SLTV), with a brand-new season, SLTV Season 5, that launched just this month. The Simonetta Lein Show (SLTV) was ranked #16 in the world by Hollywood Entertainment News. SLTV featured many incredible guests such as Don McLean, Jerry Springer, Adam Carolla, and Eric Roberts. Simonetta Lein has an outstanding 9.5 million followers on Instagram. She appeared on the cover of Forbes magazine in March 2022 and was featured on the NASDAQ billboard in Times Square.

Cleo Pillon, @cleopillon, born is Maranhão – Brazil. She studied cosmetology and aesthetics and has worked as a successful beautician for more than 15 years now. She runs her skincare and wellness company known as AegisDerma, expanding every year with more products. Cleo Pillon had a successful show in Brazil where she interviewed great and famous singers for four years. Nowadays, she works in the fields of Mining and Skincare. She is known for her the incredible support and inspiration she provides to hundreds and thousands, helping them achieve their goals and potential. She feels immense gratitude that she could garner the attention of millions of people outside her country. In a world where women aren’t encouraged so much, she is a woman proving that women can achieve and maintain a vast business horizon.

Susana Damouni, @susana.dxoxo, is a young fashion and beauty lifestyle influencer. She has over 6.8 million followers on Instagram and is often referred to as the Barbie doll of Instagram. She inspires millions of people about a wide range of topics, ranging from beauty and fashion to health and fitness. She is a brand for many renowned brands such as Shein, MARIO BADESCU, BOOMBA, Dose of Roses, Lumen, Amore Jeans, FNX, Revolve, and the list goes on and on. She is an ardent advocate of safe surgical procedures and currently works as a breast implant illness awareness model advocate for the FDA. She believes that we should always follow our passions before we follow our dreams, and that is what she discussed in her appearance on The Simonetta Lein Show (SLTV).

Carisa Speth, @carisaspeth, is a highly talented entrepreneur who specializes in virtual executive support. She has worked as an office manager, account manager, relationship manager, virtual assistant, and much more throughout her career. Super organizer and busy mama of three, with 15+ years of experience in high level executive support who is also an influencer on the side and has worked with some major household and fashion brands like Cozy Earth, Steve Madden and Rite Aid. Her linkedin bio says: “I help busy entrepreneurs stay sane and productive in their zone of genius!” and that’s exactly what defines her in one sentence. She assists both national and international clients in managing their businesses, projects, and much more. Currently, she runs Virtually Carisa, her website that offers executive services, project management services, and travel management services. She met her husband in kindergarten 35 years ago and has been married to him for twenty years now. Together they have three beautiful daughters.

Kim Moh, @therealkimmoh, is a beautiful and multi-talented fashion stylist, brand influencer, and blogger. She has over 16 years of experience in fashion, merchandising, and leadership training. First impressions matter a great deal, and that’s what she helps her clients achieve. Kim has appeared in many notable magazines, including NYWeekly Times and LA Weekly. Medium and Influencive identifies her as one of the most inspiring influencers to look out for. She is the CEO of Mohstylz, which she launched in 2019. Kim teaches her clients how to put together polished looks for any occasion and make the right first impression. Kim incorporated blogging as another way to market herself and bring visibility to her brand. Kim offers many services, including wardrobe assessment, personal styling, and photoshoot styling services. You check out her portfolio and subscribe at MOHSTYZ.com and follow her daily styling tips on IG @therealkimmoh.

Karla Dennis, @karladennisinc, is the founder and CEO of Karla Dennis and Associates Inc. Growing up in Compton, Karla spent most of her childhood inside her home studying. She successfully graduated with a degree in accounting even after failing her accounting class. With her failed class, she saw this as a lesson and opportunity to work harder for what she wanted. She later went on to pursue and earn a master’s degree in taxation. After college, she landed a job in a tax law firm which introduced her to taxation’s intricate and complex world. She worked hard for over 60 hours a week as a tax admin and soon became an expert in the field. Today she is the owner of her own firm with over 30 employees helping clients all across the United States. Karla is the writer of two successful books, Tax Storm and Against the Odds. She has been featured as an ultimate tax expert in various media outlets such as Forbes, MSNBC, KTLA, Yahoo! Finance, and Smart Money.

Rosanna RozyGlow Hanness,@rozyglow, is a resident in Peacehaven, UK. She is a passionate, ardent, and active advocate of cosmic peace. With more than 22 years of expertise in the fields of fertility, pregnancy, birth, and conscious parenting, her wisdom heals the roots of intergenerational trauma. Rosanna is a Galactic Healer who deals with negative and traumatic experiences in compassionately transforming ways. She works with creative leaders & visionaries worldwide to progress the heart-centered evolution of humanity, particularly through the Entertainment & Media industry. Rosanna encourages her followers to ditch the StarWars mindset and embrace StarPeace. She invites the world to an ‘Oxytocin Love-O-Lution’ by seeding a positive narrative in the collective consciousness of humanity through her mission, the StarPeace Movement.

Ali Levine, @Alilevinedesign, is an internationally acclaimed celebrity stylist, TV personality, lifestyle expert, author, breathwork specialist, content creator, and podcaster. Ali Levine is an inspiration to all women who want to transform their lives from the inside out. She teaches her community the A.L.I method to empower the light in them and achieve transcendental goals. Ali empowers others to find their confidence within & activate their authentic self. As a mother herself, her services as a motherhood and lifestyle expert have been covered by popular media outlets such as Forbes, Wall Street Journal, NY Times. She is among the world’s top 40 fashion bloggers. Ali shares her real raw self & entrepreneurial conversations on the top-rated podcast Everything with Ali Levine, and now on her new show, she shares her spiritual experiences with the world through her 5-star podcast, Awakening with Ali, on iTunes.

Camila Alves McConaughey, @camilamcconaughey, is a Brazilian-American designer and model. She is the wife of the spectacularly talented and Oscar-winning actor Matthew McConaughey. Camilla is the founder of Women of Today, an online community that supports and empowers women worldwide. She is also the co-founder of Just Keep Living Foundation, a non-profit organization dedicated to helping high school students live active and healthy lives. Camilla McConaughey started her career as a fashion model at 19. In 2010 she hosted the third season of the American reality TV show Shear Genius. She recently co-authored a Penguin Random House bestselling book called Just Try One Bite with Adam Mansbach.

FBI search of Donald Trump’s home ‘would make third-world dictator blush’
The Cliff House by Chris Brookmyre
Your iPhone can identify any song with just a tap. Here’s how to set it up
Digital Tool Shown to Be Effective in Helping People Reduce Alcohol Intake on Their Own: Details
Britney’s Kids Angry at Her, Haven’t Seen Her in 5 Months, Says Federline Lawyer