Women today are leaving their marks of paramount success everywhere. They are leading in the fields of influencing, acting, designing, modeling, law, podcasting, singing, business, marketing, real estate, cosplay, athletics, comedy…the list goes on and on. The greatest thing about it is that they are doing it in the face of patriarchy, and they are winning! By proving their talents in every field, they are strongly challenging the patriarchal narrative. They are showing the world that you don’t have to be of a certain gender in order to make a difference in the world. If you are interested in knowing about such powerful women, here is the official list for you, in no particular order, of the top 10 incredibly impactful women to look out for in 2022.

Katelyn Runck, @katelyn_runck, is a medical aesthetician, ACE specialized personal trainer, fitness and nutrition expert, and influencer. She is also a Yoga Alliance licensed yoga instructor (RYT 200). Her passion for fitness developed as a result of her past struggles with body image. She started her business initially as a wellness boutique and medical aesthetic clinic. Later on, she made her business more health and fitness-oriented. In 2017 she was placed in the Fitness Diva category in her first World Beauty Fitness and Fashion show competition. She received the WBFF Fitness Pro Card, which further helped her build her career as a fitness influencer. Katelyn believes that taking care of your body is not optional. Her “Lift & Transform with K: VOLI” program is available on her website Katelyn Runck Fitness for just $127!

Erica Fett, @erica.fett, is an American cosplayer, model, internet personality, horror enthusiast, and an absolute lover of Cryptids. She has attended many notable comic and gaming conventions all across the world. She loves video games and co-hosts the Camp Cryptid Podcast with her lifelong friend Lua Stardust. Camp Cryptid Podcast is a horror and true crime-focused podcast loved by gamers and non-gamers alike. Erica was the cover model for Dynamite Comic’s 50th Anniversary Vampirella cosplay variant issue. She has been featured in many other magazines such as Playboy, Maxim, Cosplay Culture, Tattoo Erotica, Camp Out Magazine, Cosplayzine, and a many more. Her cosplays were featured in Entertainment Tonight’s documentary “Cosplay: Beyond the Fantasy”. In her free time, Erica researches urban legends, true crime stories & cryptids.

Eva Zuk, @eva_zuk, is a gorgeous and highly successful model, influencer, real estate agent, businesswoman, and diamond trader. She works mostly in UAE and has lived there for the past eight years. Apart from being a passionate fashion influencer, Eva is also a philanthropist and has a law degree as well. She has worked with many brands such as Dolce Legends Dubai, Divine Nutrition, Shanghai Me Dubai, Bahri Dubai, Jumeirah Hotels & Resorts, Raffles The Palm Dubai, Al Muntaha at Burj Al Arab, Burj Al Arab, Christian Laurent Middle East, Il Pastaio Restaurant Dubai, and SLS Dubai Hotel & Residences. Eva has also appeared on the covers of many notable magazines, such as the Fashion Magazine NYC.

Wendy Bruner Paquette, @wendybrunerpaquette, is a Timeline Alchemist, Spiritual Concept Speaker, Actualize Live Event Host, Author, the Host of the Crossroads to Awakening Podcast, Mentor & Timeline Shifter to High-Frequency Beings, and much more. She has had many enlightenment awakenings that prove we have access to a higher vibrational existence that will change the reality we experience currently. Wendy Paquette believes that ONENESS is the ultimate actualization and everything we are after in our reality is on a timeline that is accessible once the old programming is turned off and we are aligned with our soul. She has three decades of experience in Oneness alchemy, frequency & timeline reading, shifting, and editing, and can help you actualize your most luxurious visions quickly. She sees your truth and that is not for the faint of heart. When you are truly ready, Wendy appears in your reality. Wendy Paquette is the secret behind many evolved humans having the support they require to change the world!

Rachel Vogt, @rachelvogttrends, is a self-employed lifestyle influencer, full-time content creator, marketing savvy, and one of the most popular bloggers on the internet. Fashion is her passion, and everybody loves her amazing shoe collection. Rachel has extensive expertise in crafting on-air talent and model images that the audience quickly responds to. Rachel has worked with well-known brands such as Ritz Carlton, Fairmont, Dyson, L’Oréal Paris, Shark Home, CVS, Neutrogena, Revolve, Too Faced, Bastiste, Maggie Sottero, Grubhub, Uniqlo, Atelier Prelude, Rocksbox, Blaze of Sweden, and many more. She runs a website known as Rachel Vogt Trends, where she shares fashion, beauty, and travel tips with her audience and followers. Her wardrobe has a little bit of everything, which is why her followers look up to her for fashion advice. 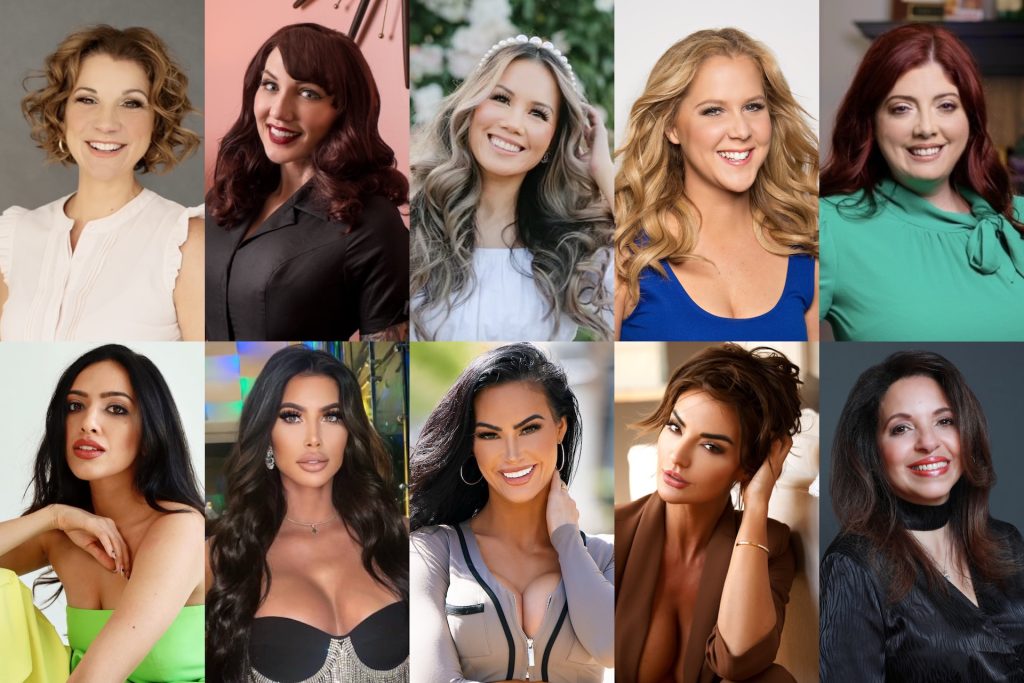 Carmen Fernandez Goldman, J.D., @consciousness_in_motion, founded the non-profit, Consciousness in Motion Academy (CIMA). The non-profit’s mission focuses on kids with autism who age out of school and do not have any continuing programs. Carmen started CIMA when her 21-year-old autistic son graduated and had no place to go. Carmen helps young adults and their families continue to learn and grow in a safe, healing environment. CIMA offers programs not previously used in the typical school environment, while continuing to support the families and caregivers of adults with special needs. Carmen has appeared as a guest on many notable shows, such as The Simonetta Lein Show and The KnoWEwell Show. She is the co-author of two books, Women Move Mountains and Vibrational Healing for Autism: AKA Awesome Kids!

Dorothy K. Butler Lawrence, @yourtrendylawyer, is one of the finest and exceptionally expert attorneys in the United States. She has many professional degrees, including but not limited to J.D., B.S., and LL.M. She is a member of the Austin Young Lawyers Association, Austin Bar Association, Louisiana Bar Association, and Texas Bar Association. Her law firm, the Dorothy Butler Law Firm, focuses on bankruptcy, criminal defense, estate planning, real estate law, tax & audits, and much more. She has been selected by Super Lawyers every year as a Rising Star from 2016 through this year. She was chosen by Austin Monthly as a top attorney in the years 2020 and 2021.Dorothy has also performed at many theatres, such as Broadway Across America, Moody Theatre, and ZACH Theatre, to mention a few.

Whitney Johns, @whitneyjohns, is an accomplished entrepreneur, fitness athlete, model, popular personal trainer, and nutrition advocate. She is a personal trainer with over ten years of experience and has transformed the lives of thousands of people with her personalized diet & training programs, findyourfitwithwhit.com. Fitness Gurls Magazine named her “Physique of the Year” back-to-back for two years. Whitney has also earned her WBFF Pro Card. She strongly believes and advocates that there is a powerful association between gut health and mental health. Whitney’s fitness coaching philosophy rests on good gut health, mental health, and hormonal health. She recently launched her own brand of nutritional supplements, Whitney Johns Nutrition, including Whitney Johns Brain Activate™, Whitney Johns Active™, and Whitney Johns Women’s Hormone Support™ on her website whitneyjohns.com. These supplements are great for brain & mental health, physical performance & recovery and women’s hormone health.

Raveena Mehta, @raveenamehtaofficial, born in Antwerp, Belgium, is a multifaceted and talented British-Indian singer, songwriter, fine artist and painter. She released her first music album, ‘From Deep Within’, when she was just 12 years old. She is well known for the acoustic version of Bollywood actor Tiger Shroff’s Casanova, Jab Tu Hai Wahi, Yaadein, and Aaja Mere Naal. She specializes in many genres, including but not limited to soul, r&b, and Indian classical genres. She has performed alongside many professionals such as Tiger Shroff, Rishi Rich, and Avitesh Shrivastav. and pop genres. Raveena is a 4-Time Attendee of The Cannes Film Festival and has been featured in various well-known magazines and newspapers such as Tribune India, Femina Magazine, Grazia Magazine, The Vogue and Mid Day Newspaper.

Amy Schumer, @amyschumer, is one of the top American female stand-up comedians. She is also an actress, producer, and writer. Her 2007 NBC reality show Last Comic Standing elevated her fame as a stand-up comedian. In 2015 she wrote and starred in the popular film Trainwreck. Amy is the star and creator of the American sketch comedy show Inside Amy Schumer. Her sketch series turned her into a household name and earned her two Primetime Emmys and a Peabody Award. Amy’s popular films include Trainwreck, I Feel Pretty, and Snatched. As an author, Amy has published a New York Times bestselling memoir, The Girl with the Lower Back Tattoo. She is a constant inspiration for all females who dream of becoming successful stand-up comedians and actresses.