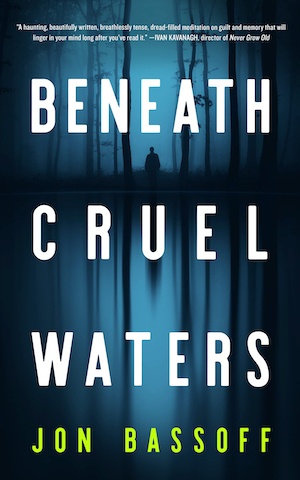 Thompsonville, Colorado. 1984. A woman walks into a man’s house, fires three shots – one to the stomach, two to the chest – killing him in cold-blood. After he takes his last breath she pulls out an old Polaroid camera, takes a picture and walks out the door. Fast-forward 34 years and the same woman returns to the now dilapidated, burnt down house where she killed the man, reads a passage from the Bible and then proceeds to hang herself from a nearby tree.

Meanwhile in Deerfield, Kansas, firefighter Holt Davidson wakes up in a cheap motel next to a waitress he picked up at a roadside café the previous night. The married woman’s unwelcome questions about who he is are interrupted by a call telling him that Vivian, his mother, has committed suicide.

Even though they had a complex relationship, Holt decides to head back home for her funeral. It’s been 20 years since he packed his duffel bags and hitched a ride out of Thompsonville. They were a fairly happy family despite his father skipping town two months before Holt was born. But when his sister, Opheila, was taken away to an asylum, a dark cloud drifted over them, his mother fluctuating between bouts of depression and religious zeal. Holt could do nothing right in her eyes, and was led to believe that Ophelia’s madness was somehow his fault.

When he returns to his mother’s old house, Holt makes an alarming discovery among the odds and ends in her bedroom – a revolver, a love letter and a photo of a dead man with ‘His last breath. 11/12/84’ written in the upper right-hand corner. Could his mother have killed this man in a moment of insanity? Who was he and why would she have murdered him? Holt starts by finding out the man’s name and begins to follow the trail of the murder.

The narrative alternates between two timelines: Vivian in 1984 and Holt in 2018. In Vivian’s story we see a woman who moves from one abusive relationship to another, putting herself and her two children at risk. Desperate for love and also infuriatingly naive, she doesn’t realise that she’s invited a violent man into their home until it’s too late. Vivian is a good mother. She does the best she can as a single parent and will protect her children at all cost. She’s played the victim for long enough and when she decides to stand her ground it has far-reaching repercussions.

Holt not only fights fires, he also battles his own demons. After rescuing a baby from a burning building he was hailed the local hero for a couple of weeks. But Holt can’t get the image of the screaming baby and its dead mother out of his head. The incident has brought bad memories from his childhood to the surface and he has no idea where they fit in.

Joyce, his mother’s friend who is also married to the cop who investigated the murder in the 80s, hints that Ophelia might be able to provide some answers. Holt hasn’t seen Ophelia since she was committed and she’s hardly in a state to give him any useful information on their mother’s involvement in the murder. However, she does throw him a breadcrumb which brings him closer to the truth.

Beneath Cruel Waters strikes a perfect balance between being a slow-burning psychological thriller with an intriguing and unsettling premise and a coming-of-age story fraught with emotion. We are reminded of how one impulsive decision can completely alter the trajectory of a life. Also, that secrets for the sake of keeping up appearances and lies will ultimately lead to tragedy, especially if it’s in the name of religion.

Bassoff’s characters, their moral dilemmas and the irrevocable choices they make reminded me of Dennis Lehane’s Mystic River. Although it will take a lot to meet Mystic River’s emotive impact Beneath Cruel Waters makes a damn good attempt. Heartbreaking, bleak and riveting.

See our reviews of the excellent Factory Town and The Incurables by the same author.

Why has the FBI raided Trump’s estate – and what are they investigating?
The Recent Blumhouse Horror Film That Jason Blum Admits Was ‘Terrible’
Nearly 50,000 sign petition backing Gordon Brown’s call for emergency budget to tackle cost of living
Calls for emergency increase to Universal Credit as report finds some families £1,600 worse off
Jeanneau’s New Family-friendly Flagship