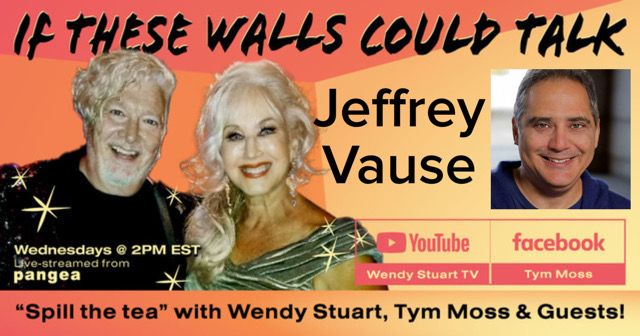 Who else but hosts Wendy Stuart and Tym Moss could “spill the tea” on their weekly show “If These Walls Could Talk” live from Pangea Restaurant on the Lower Eastside of NYC, with their unique style of honest, and emotional interviews, sharing the fascinating backstory of celebrities, entertainers, recording artists, writers and artists and bringing their audience along for a fantastic ride.

Jeffrey Vause will be a featured guest on “If These Walls Could Talk” with hosts Wendy Stuart and Tym Moss on Wednesday, July 6th, 2022 at 2 PM ET live from the infamous Pangea Restaurant.

Wendy Stuart is an author, celebrity interviewer, model, filmmaker and hosts “Pandemic Cooking With Wendy,” a popular YouTube comedic cooking show born in the era of Covid-19, and TriVersity Talk, a weekly web series with featured guests discussing their lives, activism and pressing issues in the LGBTQ Community.

Tym Moss is a popular NYC singer, actor, and radio/tv host who recently starred in the hit indie film “JUNK” to critical acclaim.

When you’re from paradise, why would you ever wanna leave?

BACK BY POPULAR DEMAND – AFTER A SOLD-OUT NYC CABARET DEBUT IN MAY!

Written and performed by JEFFREY VAUSE (www.jeffreyvause.com), this cabaret act explores through songs and stories Jeffrey’s journey from an innocent young performer who grew up in Honolulu, Hawaii to his eventual move to New York City – because growing up in paradise wasn’t enough!

Featuring music by Bacharach/David, Irving Berlin, Stephen Sondheim, Jerry Herman, Maltby/Shire, Edward Kleban, Kander/Ebb, Marvin Hamlisch plus others, this delightful show will take you from the most beautiful island in the world to the most exciting one!

In Honolulu, Jeffrey performed in numerous productions before his move to the Big Apple. He triumphed as Arnold in the 15th Anniversary Off-Off Broadway revival of Harvey Fierstein’s Tony-winning play TORCH SONG TRILOGY at the Grove St. Playhouse in Greenwich Village. H/X Magazine in its review wrote: “Jeffrey Vause, excellent as Arnold, the broken-hearted drag performer, regenerates the role with a more relaxed demeanor.” Jeffrey has also been seen in IRVING BERLIN RAGTIME REVUE, THE IT GIRL, OKLAHOMA! & Andy Halliday’s NOTHING BUT TRASH, portraying 3 different character roles.

Jeffrey produced, wrote and performed in a one-man multi-character play (also called ALOHA OY!) and recently produced, wrote and starred (in drag no less!) in TOMORROW WE LOVE, a gender-bending comedic homage to the classic romantic  films of the mid-20th century, at Theater for the New City.

He founded PROUD IMAGE THEATRE COMPANY in 2019 to highlight and showcase works primarily from the LGBTQIA+ community that demonstrate tolerance and promote visibility through artistic expression.

Watch Jeffrey Vause on “If These Walls Could Talk” with hosts Wendy Stuart and Tym Moss on YouTube here:

Subscribe and listen to “If These Walls Could Talk” on Apple Podcasts/iTunes here:

Bohemian noble family redefines modern aristocracy by selling NFTs to preserve and share a 700-year-old legacy
Taylor Swift Files Motion in “Shake It Off” Copyright Lawsuit, Says Lyrics “Were Written Entirely by Me”
A Lady for a Duke
Climate Change May Increase Mortality Rate by Six Times, Claims New Study
After His Friendship With Kevin Hart Was Declared A Conspiracy, The Rock Had A Classic Response