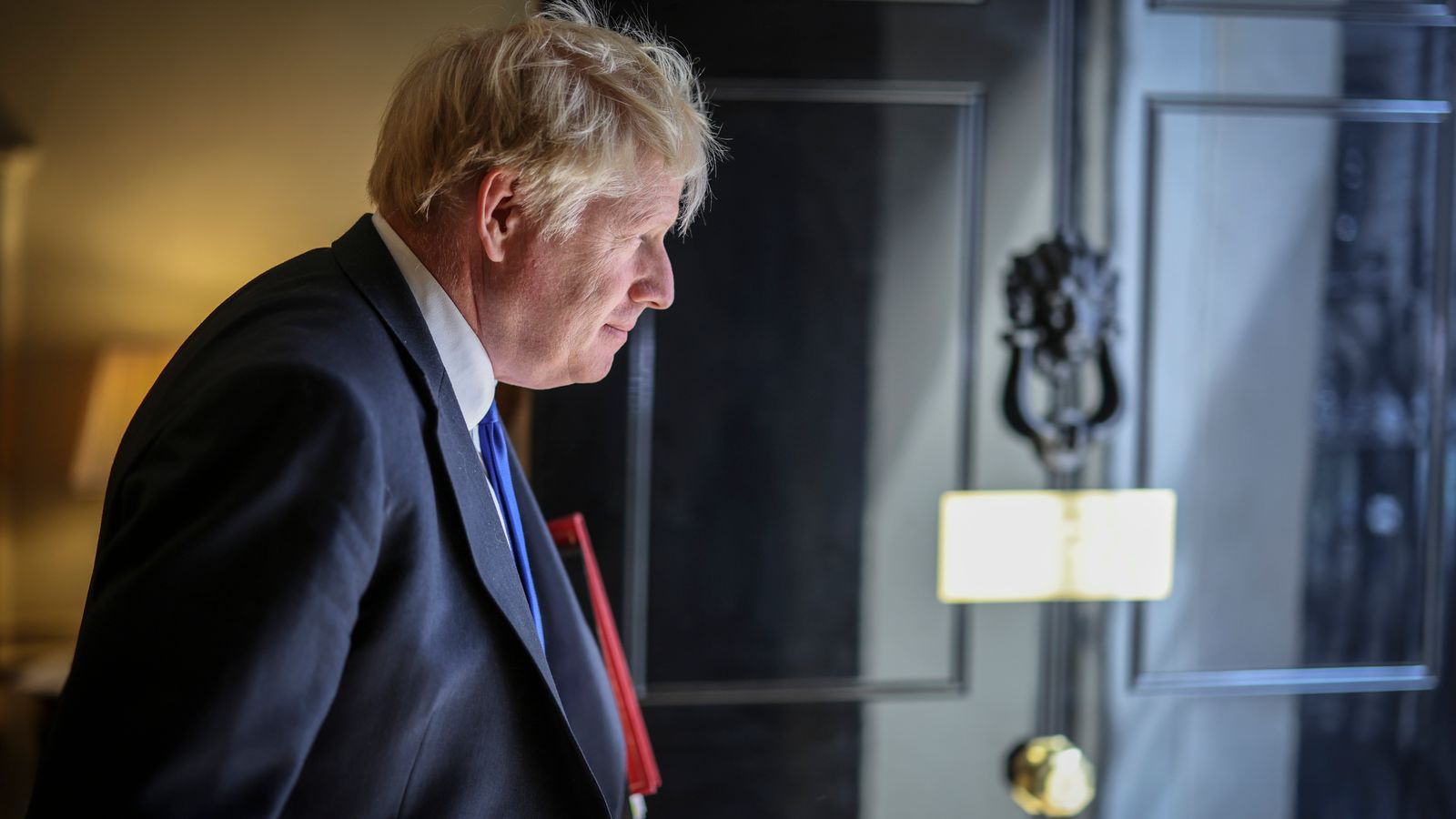 Boris Johnson is still prime minister this morning despite a cabinet revolt, more than 40 of his own MPs quitting their government roles and at least one senior Tory saying they’d be willing to run for the party leadership.

The prime minister dramatically sacked Levelling Up Secretary Michael Gove late on Wednesday evening after it was understood that he, along with other members of Mr Johnson’s top team, told the PM he should listen to the overwhelming view of the Conservative Party and stand down.

Mr Gove is believed to have been joined by loyal supporter of Mr Johnson, Home Secretary Priti Patel, new chancellor, Nadhim Zahawi, Welsh Secretary Simon Hart, Business Secretary Kwasi Kwarteng and Transport Secretary Grant Shapps in calling for Mr Johnson to step aside at a stand off in Number 10.

But, resisting their calls, the PM’s parliamentary private secretary James Duddridge told Sky News that Mr Johnson is “in a buoyant mood” and “will fight on”.

Meanwhile, a senior Number 10 source told Sky News that Mr Johnson is “absolutely defiant” and “does not intend to resign” despite some of his most loyal cabinet ministers joining calls for him to quit.

Cabinet minister Mr Hart later resigned from the government having failed to persuade Mr Johnson to step down.

In his resignation letter, the Welsh secretary said he wanted to help Mr Johnson “turn the ship around” but “we have passed the point where this is possible”.

Also quitting, health minister Ed Argar, wrote to the PM: “I fear that a change is needed in order for our party to continue on our shared ambitions for our country.”

Ms Patel, Mr Zahawi, Mr Hart and Mr Shapps were also joined by Policing minister Kit Malthouse, new Education Secretary Michelle Donelan and Chief Whip Chris Heaton-Harris in Number 10 where they were believed to have told the PM in that his position was untenable.

Sky News’ deputy political editor Sam Coates understood the group delivered a “final ultimatum” to Mr Johnson, saying “you go or we do”.

Analysis: The end of days for this ‘delusional’ PM

Attorney General Suella Braverman, who has previously been a Mr Johnson loyalist, later also told ITV’s Robert Peston: “I do think the time has come for the prime minister to step down.”

Asked if she had ever thought about standing for PM, Ms Braverman replied: “Yes, I will.”

As of Wednesday evening, a total of 46 individuals had quit their government posts as support for the PM’s leadership collapsed at Westminster.

The avalanche began with the shock resignations of Health Secretary Sajid Javid and Chancellor Rishi Sunak on Tuesday evening after Downing Street admitted Mr Johnson had known about allegations of inappropriate behaviour by disgraced MP Chris Pincher in 2019 before hiring him as deputy chief whip in February.

Mr Pincher resigned from the role last week after further allegations that he groped two men at a private club in London, and he was later suspended from the Conservative Party.

But, despite the mood among Conservative MPs firmly moving against him, Mr Johnson rejected suggestions he should seek a “more dignified exit” and will instead fight for his political future – something which could trigger further cabinet resignations today.

Mr Zahawi, only appointed as chancellor on Tuesday evening following Mr Sunak’s sudden resignation, is not believed to be considering quitting despite calling for the PM to stand aside.

A source close to Mr Zahawi told Sky News that the chancellor will not be resigning and that he wants to focus on lowering the tax burden and help with easing the burden of the cost of living crisis.

Other cabinet ministers have expressed their continued support for the PM.

At PMQs yesterday, Sir Keir Starmer attacked the PM over his handling of the scandal regarding Mr Pincher, reading out the accusations levelled at the former deputy chief whip as a “reminder to all those propping up this prime minister just how serious the situation is”.

In fiery exchanges, the Labour leader said the list of resignations had left him with a “z list cast of nodding dogs” on his frontbench, and that “sinking ships [are] fleeing the rat”.

But Mr Johnson insisted: “The job of a prime minister in difficult circumstances when he has been handed a colossal mandate is to keep going, and that’s what I am going to do.” 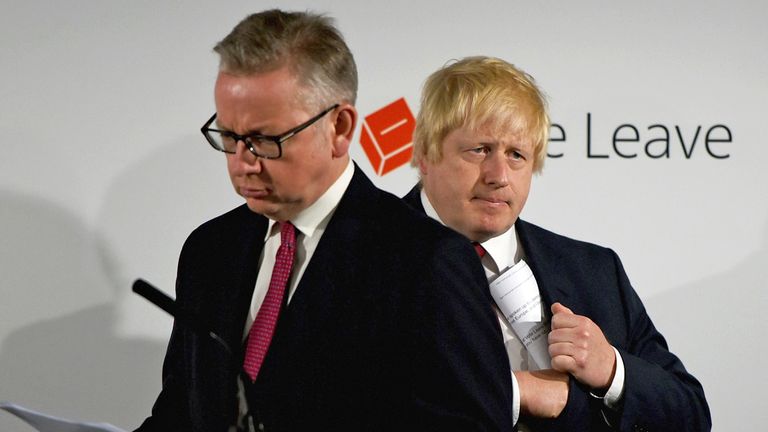 The Prime Minister has sacked Levelling Up Secretary Michael Gove from his cabinet.

In his second probe of the day, the PM gave evidence to the Liaison Committee over in the House of Commons where he insisted to its members that he will stay in power as it is not “responsible just to walk away”.

Mr Johnson said he would “of course” still be prime minister on Thursday despite facing mounting resignation letters.

Meanwhile, William Wragg, a Tory MP who described the PM’s position as “untenable” in January, asked Mr Johnson: “At which point does it become impossible for the Queen’s government to be continued?”

The PM replied that governments cannot solve problems by “threatening to call elections”.

More resignations could follow today after the sacking of Mr Gove.

Following the levelling up secretary’s sacking, senior Conservative MP Huw Merriman tweeted: “My sincere hope is that the PM latches on to some dignity.”

Fellow senior Tory Sir Bob Neill added: “Our country is being made a laughing stock by one person’s obsessive selfishness.”

Meanwhile, the executive of the Tory backbench 1922 Committee met to discuss whether to change the rules to allow a fresh confidence vote in the prime minister to take place.

At present, the rules state a prime minister is immune from a second confidence vote until twelve months have passed since the first.

The influential group decided it would hold elections for a new executive on Monday, and they could decide on any rule change the very same night.

The SNP’s Westminster leader Ian Blackford predicted to Sky News that the prime minister will be “dragged out next week” by his own MPs when the 1922 Committee is expected to change rules around confidence votes.

The question now is whether Mr Johnson can hold onto his role until then.