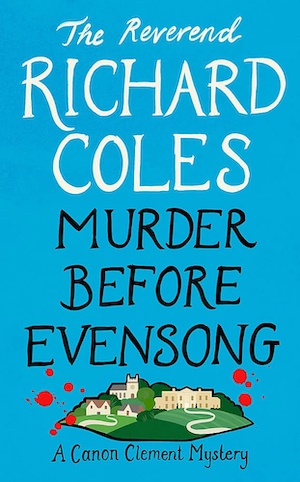 In Murder Before Evensong, Richard Coles’ debut cosy mystery, Canon Daniel Clement joins the ranks of crime-fighting clergy alongside such literary legends as Father Brown, Reverend Sidney Chambers and Brother Cadfael. As the Rector of Champton St Mary, a bucolic English parish still supported by the patronage of the landed gentry, Daniel is used to a quieter pace of life – regular services, sickbed visits, committee meetings and excessive cake consumption. All changes when he hits upon a radical idea: a lavatory should be installed in the church.

The provision of such a convenience might seem like a sensible plan – particularly given those caught short while visiting the church have historically been known to relieve themselves against one of the more secluded outside walls – but it divides the parish like nothing else. The staunchest supporters of the anti-lavatory campaign are the dedicated members of the flower committee, while those in favour of the new facilities include Lord Bernard de Floures and others from the ‘Big House’.

Daniel is somewhat bemused by the flower committee’s opposition and the lengths they will go to in an effort to avoid any remodelling of the church that will involve anything ‘unpleasant’. Plumbing for a toilet is definitely not okay, while plumbing for a buttery is perfectly acceptable. However, severely misjudges the strength of feeling in at least one parishioner. This becomes all too clear when he discovers the body of Anthony Bowness, cousin of Lord de Floures, by the pews at the back of the church.

Archivist Anthony has been stabbed in the neck with a pair of secateurs, meaning that there is a murderer loose in the otherwise sleepy Champton. Daniel must calm the fears of his parishioners, which proves tricky to do as he becomes increasing aware of the ominous atmosphere that now hangs about the village. As a canny observer who happens to have unparalleled access to all those involved, Daniel almost unwittingly finds himself drawn to helping local policeman Detective Sergeant VanLoo investigate the murder.

It soon becomes clear that Champton and its residents are awash with buried secrets and bubbling resentments, some of which date back to events during World War II. There is no shortage of suspects who might have had reason to disrupt the lavatory project and/or murder Anthony. As the investigation continues and the body count rises, Daniel is forced to question how much he really knows about the people and history that surround him.

As Murder Before Evensong is the first in a projected series featuring Canon Daniel Clement. There is a lot of world-building and scene-setting early on which slows the pace of the story quite considerably when compared with other mysteries. In fact, the first hundred or so pages are dedicated to introducing Daniel, his eclectic parishioners (and their views on lavatories) and the village of Champton itself. It takes a surprisingly long time for the first body to drop. Even then, the murder of Anthony doesn’t really speed things up, even if it does shake things up a bit, and it isn’t until a second murder occurs that Daniel really gets cracking with the case.

From that point onwards things get more exciting and intriguing as the mystery is unravelled and the motives behind the murders become clear. In addition, the final denouement wouldn’t be possible without the establishment of considerable backstory and character-related detail, which explains the care that Coles takes at the beginning to get everything set up. The high level of detail also serves to build a clear picture of Champton as the surprising setting for murderous shenanigans, with the village promising to rival St Mary Mead in terms of its capacity to house mayhem.

However, while the sense of place is very good, the sense of time in Murder Before Evensong is more puzzling. In certain places within the story, particularly at the beginning, it could be a contemporary novel, while in other places it could be set in the 1950s, but based on references to television programmes, grocery products and telephone numbers peppered throughout, it must actually be set somewhere towards the end of the 1980s. It would have been helpful if Coles had clearly established the time period from the beginning, rather than leaving it as an unnecessary puzzle that could detract from the flow of the story.

As the series sleuth, Daniel is very clearly the main character in Murder Before Evensong, which translates into him also being the most well-developed character, even if he does start out as something of an everyman. He has a patient, warm-hearted but slightly resigned perspective on his parish and plenty of timely and acute observations to offer. He really comes into his own as an amateur detective following the second murder, which suggests that he’ll be a stronger character from the outset in future books. Daniel’s interactions with his mother Audrey, brother Theo and various elderly parishioners (who do occasionally blur into one) also add a lot of humour to the story.

Murder Before Evensong is a light-hearted and engaging cosy mystery populated by a cast of bygone English eccentrics who find themselves entangled in a perplexing puzzle that can only be solved by the most tenacious of amateur sleuths.

If you enjoy cosy mysteries in genteel settings, be sure to also check out MH Eccleston’s The Trust and SJ Bennett’s A Three Dog Problem.

Pinterest’s plan to better compete with TikTok, Shopify and Instagram
Nearly 50,000 sign petition backing Gordon Brown’s call for emergency budget to tackle cost of living
“I will do what I can for damage control”: Abortion Information Misinformation within Oklahoma City’s METRO Library
Higher prices, skimpier portions and apps — how fast-food chains are changing value deals
Britney’s Kids Angry at Her, Haven’t Seen Her in 5 Months, Says Federline Lawyer