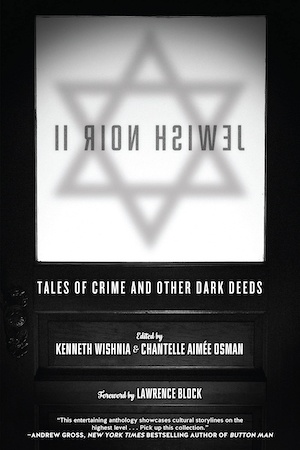 Edited by Kenneth Wishing & Chantelle Aimée Osman — In his lively introduction to Jewish Noir II, legendary New York crime fiction author Lawrence Block sums up every Jewish holiday in three sentences: “They tried to kill us. We survived. Let’s eat!” While the last sentence is an essential part of Jewish holiday celebrations, he points out that the first two are even more tied to Jewishness and, as he says, make the combination of Jewish and noir almost inevitable.

This collection of 23 short stories, many of which were written by prize-winning authors, are clustered in six themes: legacies; scattered and dispersed (stories from the diaspora); you shame us in front of the world (embarrassment and dishonour); the God of Mercy; the God of Vengeance; and American Splendor (stories that could only happen in the United States). Editors Kenneth Wishnia and Chantelle Aimée Osman refer to what is a subtext of many of the stories: fear amidst the stresses of modern life. Fear of the past, fear of loss, fear of antisemitism, fear of violence. Fear that’s another marker on the road to noir.

Even with that recurring thread, the stories themselves are wildly diverse and you’re bound to find many of them appealing regardless of your stylistic preferences. This review tackles only four from across the themes mentioned.

The opening story is Taking Names by Steven Wishnia, which sits perfectly in the sweet spot between past and present. It begins with the commemoration of a notorious tragedy. New York City’s Triangle Shirtwaist factory fire of 1911 was a calamity in which young women workers jumped nine stories to their deaths rather than be burned alive.

Because of the business owners’ negligence, 146 people died – mainly Italian and Jewish immigrants. The issue of worker safety is brought up to date by reporter Charlie Purpelburg. He is now covering union efforts to improve safety in the construction industry. Risky conditions still affect the most vulnerable employees, undocumented workers. His story finds them caught in the political machinations of Jewish developers, who are not only skirting safety regulations but also stealing workers’ wages. Charlie’s story brings hordes of social media trolls, attacking him on one side because he’s a Jew and on the other because the developers are Jewish, making him an alleged antisemite.

Where does all this racial hostility end? No place good.

Craig Faustus Buck’s The Shabbes Goy is another tale of exploitation, this time of one elderly woman by her ultra-religious second husband, who fills their apartment with gloom and domination. Living with them is her granddaughter, a university graduate student. Across the way is the Guttermans’ neighbour Holly, who fills her front window with a salaciously dressed mannequin, positioned for viewing by the passers-by, especially the Orthodox neighbour on his way to temple. Another play in her aptly-named offensive against him is blaring rap music.

Holly seduces a pizza delivery boy who encounters exhausted Mrs Gutterman on the sidewalk, dreading the 51 stairs she’ll have to climb for arriving home late. No pushing an elevator button on the Sabbath, which is one of many arcane prohibitions the story relates. She inveigles the pizza boy to push the button and before long he joins the trio of women determined to escape Gutterman’s tyranny.

Although many of the stories are dark, as befits a noir volume, The Almost Sisters by Ellen Kirschman is a kindly tale about two elderly women friends and housemates. To make ends meet, they start their own chauffeuring and house sitting business for residents of their apartment complex. Their clients include a couple charged with the care of their eight-year-old grandson while his parents travel the world for a charity they founded (shades of Bleak House’s Mrs Jellyby). The boy’s troubles soon become the friends’ business.

“What was I thinking?” begins The Nazi in the Basement by Rita Lakin. An elderly Jewish woman returns to New York from California for a funeral and decides to do the unthinkable and rent a car to drive to her old neighbourhood in the Bronx. She hasn’t visited her childhood home in decades. When she lived there, the residents were mostly Jews, Irish and Italians. Now, before she can park the car she encounters teenagers from Jamaica, Puerto Rico, Hong Kong and Bangladesh. They’re fascinated she lived there so long before and wheedle most of her life story out of her. But she doesn’t give them the ending, the tragic events that produced in her what the author terms ‘the scars masquerading as memories.’

While three of these examples involve elderly characters, many of the stories in Jewish Noir II address the issues of the younger generations. But it is today’s elderly, grandchildren of the immigrants from the early part of the last century, who are most aware of the massive social changes that came with families’ upward mobility and who are today caught between past and present. This includes family stories of the Holocaust. It’s always a mistake to generalise about people and groups, because differences are so great, but I think if you were asked to do so, to describe a ‘typical’ Jewish household, its living, breathing heart would be a Jewish grandma in the kitchen.

The theme of forgetting the Holocaust is key in The Garden of Angels by David Hewson.

NASA Aims to Redirect Asteroid in DART Mission’s First Attempt at Planetary Defence
Tech stocks just had their worst two-week stretch since the start of the pandemic
Bed Bath & Beyond reports 28% drop in sales as it presses ahead with turnaround plan
New Details About Johnny Depp’s Alleged Romance With Lawyer Emerge, But He May Already Have Eyes On Other
Mortgage refinancing drops to a 22-year low as interest rates surge even higher