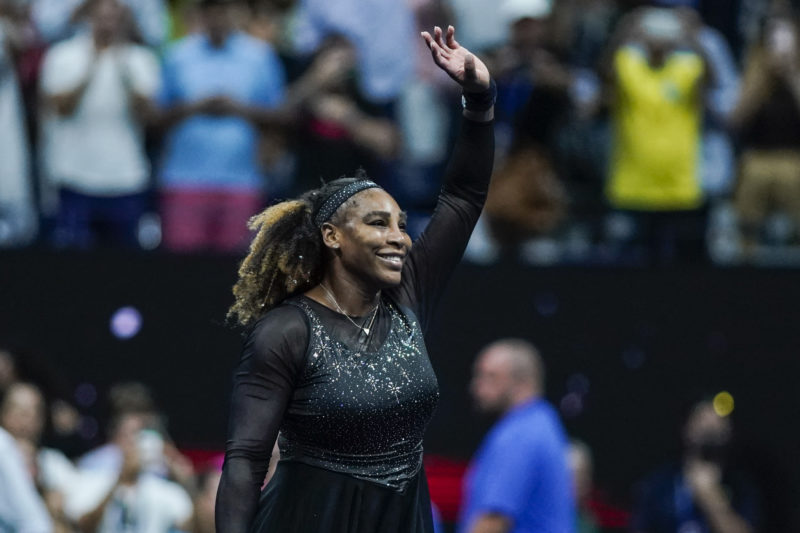 Even after she stops playing tennis, she’ll still be winning.

In a world that teaches women we need to shrink in order to fit in, Serena Williams refuses to be contained.

Take the match that kicked off her final tournament: the 2022 U.S. Open Championship. On August 29, the athlete played in a head-to-toe crystal-embellished Nike ensemble (including a diamond-encrusted swoosh!). The symbolism of her galaxy-inspired outfit shouldn’t be lost on any of us. After announcing in a recent Vogue essay that she would be “evolving away” from her tennis career, she was signalling that not even the sky is the limit for her next act.

Throughout her groundbreaking career, Williams has pushed back on the old-fashioned constraints of the sport. Tennis was historically dominated by upper-middle-class, white players and had a strict women’s dress code of corsets and long skirts. The uniform was modest and subdued to represent the well-behaved women wearing it.

But Serena Williams — who is not white, waify or from a wealthy background — has continuously used her uniform to push against that meek “angel in the house” trope. At the 2019 French Open, her ensemble emblazoned with the French words for “Mother, Champion, Queen, Goddess” was a statement about the strength of womanhood. In 2018, she famously donned a superhero-like catsuit for the French Open. Even back in 2004, she surprised the world in a pleated denim mini-skirt at the U.S. Open.

Throughout her career, her subversive looks have been met with pushback. In fact, many facets of Williams’ appearance and demeanour have been the target of criticism over the years, often as a thin veil for racism and sexism. But she’s made a name for herself by standing out in spite of it all. “There were so many matches I won because something made me angry or someone counted me out,” she writes in Vogue. “That drove me.”

Though women are often taught to strive for softness, Williams shows there’s power in being bold. From her reverberating vocal grunts when hitting the ball to her ability to traverse the entire court quickly, the star shows up as her whole, unapologetic self every time. And she’s raising her daughter, Olympia, to do the same.

Sartorially, that fearlessness has translated to uniforms with bright colours and loud patterns, and unexpected pieces like frilly tutus and corset tops. It’s this enduring individuality that has made Serena Williams a bonafide fashion icon off the court. From walking the runway to gracing the steps of the Met Gala, the athlete’s larger-than-life persona has transcended industries.

Taking up space is not always easy. It involves expecting more from yourself while commanding respect from others. It means believing that you belong in certain spaces, even if people don’t want to make you feel welcome. There’s often harsh criticism when women take up “too much” space, but Serena Williams refuses to dial back her outfits, mute her voice or curb her enthusiasm. In spite of negative feedback, she’s never made herself smaller.

“I’d like to think that thanks to opportunities afforded to me, women athletes feel that they can be themselves on the court,” she reflected in her essay. “They can play with aggression and pump their fists. They can be strong yet beautiful. They can wear what they want and say what they want and kick butt and be proud of it all.”

We’re often taught success means changing ourselves to play the game. But Serena Williams showed us it’s okay to rewrite the rules.