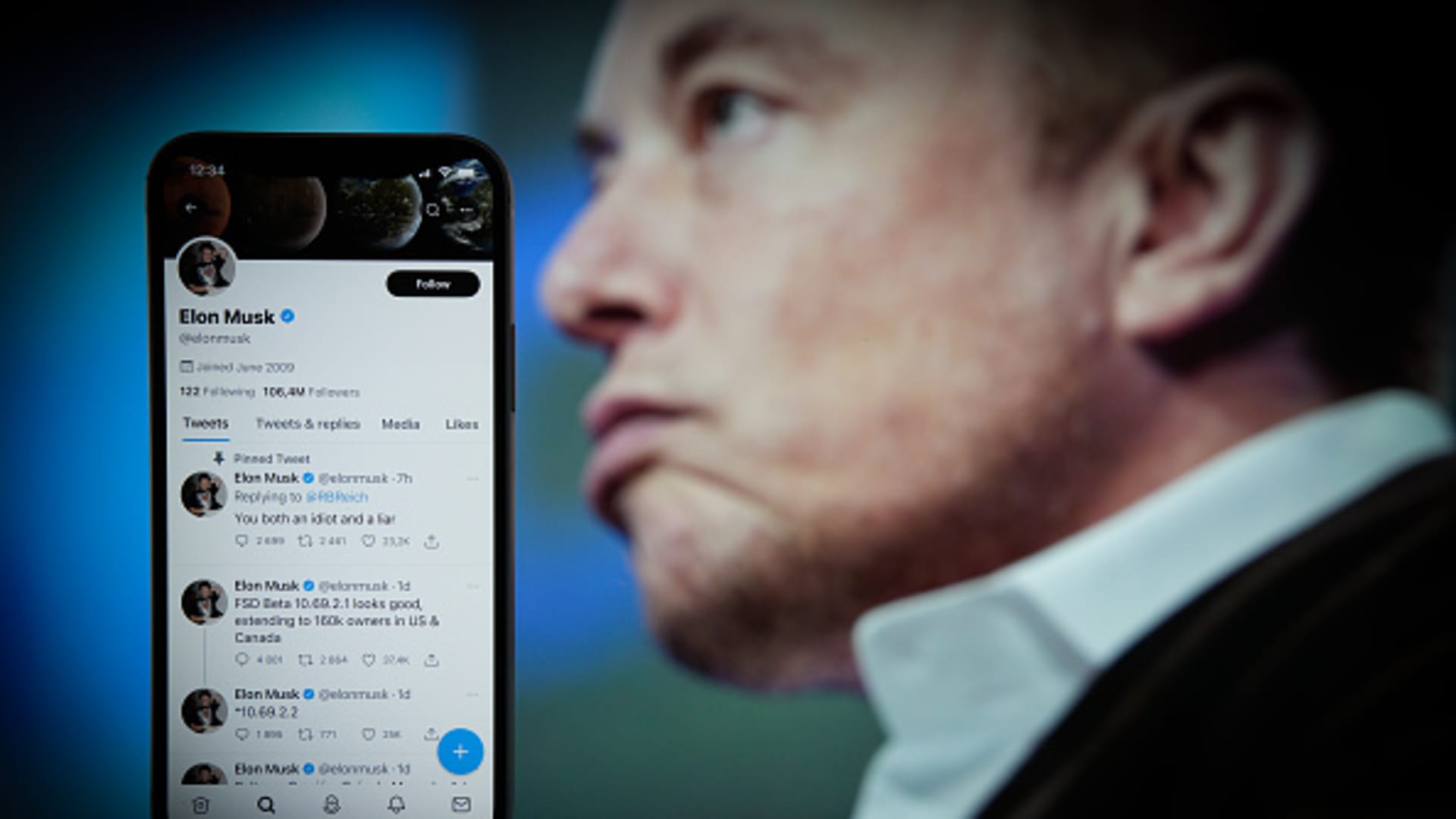 When Elon Musk said last week that Twitter has experienced a “massive drop in revenue” under his recent tutelage, he blamed the decline on “activist groups pressuring advertisers.”

There was some merit to his claim. A group of civil rights leaders had sent a letter to the CEOs of major companies, including Anheuser-Busch, Apple, Coca-Cola and Disney, urging them to relay their concerns about brand safety on the site to Musk. Later, the group would call for those businesses to halt ad spending on Twitter following what its leaders saw as a rise of racist posts and hate speech.

While Musk may be right to attribute some of the revenue drop to activist pressure, at least part of the responsibility falls on him. Twitter’s new owner, the world’s richest person, recently tweeted a conspiracy theory related to the attack on Paul Pelosi, husband of House Speaker Nancy Pelosi, and has made a series of crude and sophomoric jokes, some of which he’s quickly deleted.

Businesses don’t want to link their brands with that sort of behavior and content, said Rachel Tipograph, CEO of advertising technology firm MikMak.

“There’s concerns with advertisers around brand safety, and that’s really what this is all about,” Tipograph said. “Advertisers right now are not looking to be associated with the events that are currently happening at Twitter.”

Companies such as General Motors and Volkswagen have paused their spending on Twitter following Musk’s arrival, while advertising titan Interpublic Group recommended that its clients do the same. The boycott poses a significant problem for the social media service, which derives 90% of sales from advertising.

Compared with larger rivals Facebook and Google, Twitter never managed to develop an online ad business that matched the scale of its influence in popular culture and society at large. Twitter has lost money in six of the eight years since its IPO. Its revenue in 2021 reached $5 billion, while Facebook generated sales of $118 billion and Google parent Alphabet recorded $257 billion in revenue.

Twitter’s revenue in the second quarter declined from a year earlier.

“In my humble opinion, to use a very technical term, their business sucks, and they need a radical transformation,” said Len Sherman, an adjunct professor of business at Columbia Business School.

It’s a business that Musk shelled out $44 billion to purchase. As part of the deal, he borrowed $13 billion, which he has to pay back.

For that investment, he got a company with “very poor targeting capabilities in an ad-based business where that’s essential,” Sherman said. “I kind of laugh because I keep getting Twitter promoted ads in my stream for companies that would be better directed to 13-year-old girls.”

On Wednesday, Musk is holding an audio meeting with advertisers on “Twitter Spaces.”

Musk did himself no favors after the acquisition, which closed in late October. In addition to his own questionable tweets and retweets, he’s been inconsistent in laying out what he means by free speech and acceptable content on the platform, and he abruptly fired roughly 50% of Twitter’s staff almost immediately, raising further questions about content moderation.

Companies typically halt their advertising campaigns if they feel they may suffer reputational damage. For example, businesses boycotted Alphabet’s YouTube in 2017 over concerns their ads would be played alongside extremists’ videos.

YouTube executives responded quickly at the time, allowing third-party verification of content, and hired more people to remove the offensive videos. Advertisers came back, and the business rebounded promptly.

Musk would rather take a combative approach to advertisers. In response to a tweet recommending that he name the brands that are boycotting Twitter so that his followers can boycott those brands, Musk said “a thermonuclear name & shame is exactly what will happen if this continues.”

Meanwhile, Musk is taking a convoluted approach to banning users. Twitter booted comedian Kathy Griffin for impersonating Musk on the site, while it temporarily locked comedian Sarah Silverman’s account for a similar offense.

Jeff Seibert, Twitter’s former head of consumer product and now co-founder of Digits, called it “a mistake for Elon to be the face of content moderation.” In the past, Twitter has taken a team approach to policy violations.

“If you put one person in charge of it, I think you start seeing random decisions like this that then [cause people to] lose trust,” Seibert said.

Kathy Griffin attends the premiere of ‘A Hell of a Story’ during the 2019 SXSW Conference and Festival at the Zach Theatre on March 11, 2019 in Austin, Texas.
Tim Mosenfelder | Getty Images Entertainment | Getty Images

Data from MikMak, whose clients include Colgate, Unilever and General Mills, show a broad pullback in ad spending on Twitter. From Oct. 1 through Nov. 7, Twitter suffered a 68% drop in media traffic, which refers to the number of times people click on an ad, according to MikMak.

“We were actually seeing an uptick in Twitter traffic,” Tipograph said. “As soon as Elon Musk’s potential ownership was becoming more imminent, we significantly saw a change in traffic.”

Whatever tech and business improvements were taking place will be difficult to sustain, as the mass layoffs ate into Twitter’s global marketing team, whose responsibilities include reporting and metrics around ad performance, CNBC reported.

Musk has turned his focus to subscriptions as the key to reviving Twitter’s financials. He’s pitched an $8-a-month offering that allows people to be “verified” and gain premium features. The critics have been so vociferous that Musk on Monday tweeted an image of a t-shirt, reading “Your feedback is appreciated. Now pay $8.”

Musk has previously hinted that he wants to convert Twitter into a so-called super app, similar to China’s WeChat, that people can use to talk to friends, watch movies and buy goods.

Still, he’ll need partners that want to work with him. And his aggressive stance towards companies that have paused ads on the site isn’t a good look as he pursues other partnerships, said Jeanine Turner, a professor in Georgetown University’s Communication, Culture and Technology program.

The “big issue for him I would think would be trust,” Turner said. “I don’t see people trusting him with all of that information.”

As for advertisers, many brands don’t consider Twitter an essential avenue for distribution considering its less sophisticated ad-tracking technology and targeting capabilities. Other opportunities are emerging, such as connected TVs and streaming services as well as Amazon’s growing online ad business for retail-oriented companies, Tipograph said.

Jessica González, the co-CEO of nonprofit group Free Press, has been unimpressed with Musk’s antics. González was one of the civil rights leaders who spoke to Musk last week, expressing concern about the rise of hate speech against Black and Jewish groups on Twitter. It’s the same group that was urging advertisers to halt their campaigns.

González said she was willing to give Musk “the benefit of the doubt” when he told the group that Twitter was aligned with them. But between his rhetoric that followed and his slashing of half the staff, she has serious doubts about whether it’s worth trying to work with him.

When asked whether she would take another meeting with Musk to discuss Twitter’s approach to offensive content, she said, “I don’t know.”

“Only because he made some promises in that meeting, and then went back on them like two days later,” González said.

Correction: This article has been updated to correct the spelling of House Speaker Nancy Pelosi’s name.