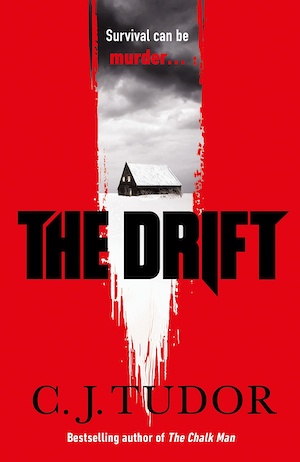 CJ Tudor’s debut novel The Chalk Man was a bestseller and, occupying a crime fiction and horror crossover niche, she has been likened to Stephen King. We could all be hearing more about Tudor soon – incredibly, her first four novels are all in development for TV and her fifth, The Drift, has also been optioned.

The Drift promises much as three separate groups of people are cut off from the world, trapped respectively in a cable car, a cabin and an overturned coach. In one location there’s a killer lurking among the survivors. But that’s only the half of it. This is a post-apocalyptic thriller, tinged with terror. The survivors have a strange virus and a blizzard to contend with.

The preface introduces us to a corpse in the wilderness, lying there like a snow angel, arms and legs akimbo. A bird pecks at the flesh, a wolf will be next to feed on the body and eventually a hunter will kill the wolf for his family larder. First the bird dies, then the wolf and finally the family.

Cut to a coach crash. Hannah, a medical student, comes around after a road accident. Though she’s not seriously hurt, some of the other passengers have been killed. The survivors help the wounded and assess their dire situation. They were en route to the Retreat, but its location was kept secret from them. They are all participating in a research project and are without phones. When the snowstorm hits they are completely cut off from the outside world. Hannah realises one of the dead has signs that the virus had got hold of him – he was already dying. If the rescuers know this they may not come at all. Was the crash even an accident…?

Meg wakes disoriented, gradually realising she is one of six people in a cable car suspended mid-way to a mountain top with no power. Four others remember nothing after their respective breakfasts in the hotel that morning. Were they drugged and brought here, is this the way to the Retreat? Eventually they turn over the sixth person, apparently still asleep on the floor, but he’s been stabbed to death. Was the killer one of the them?

At the Retreat, Carter, a victim of frost bite, realises that Jackson is missing. The weather is closing in and soon the Retreat will be totally cut off. Carter sets out on one last trip to the mountain supply store for provisions. On the way back he finds a man, half-dead in the snow. Could this be Jackson and can Carter save him? Back at the Retreat life takes some bizarre and chilling turns as they explore the darkest recesses of the research facility. Discoveries are made, bodies drop and gradually the sinister truth about the Retreat emerges.

Ultimately, the stories converge, and while grasping the strands of the story but you’ll also come to understand the altered world in which The Drift takes place – a world changed by the arrival of a virus. CJ Tudor came up with this idea before COVID but began writing during lockdown, and the claustrophobic atmosphere she generates may hit some readers harder than others. Since COVID, we all understand being cut off from the world better than we ever wanted to. There is a creepiness to the story too, plenty of edgy situations and half-glimpsed truths to lure us in. Tudor has stretched her imagination to make this a dark foreboding read.

This is a high concept novel with a huge and gripping premise. Can the body of the story and the denouement live up to that potential? Mostly, the answer is yes because of the fast pace of this apocalyptic horror. The three closed circle mysteries need a strong unifying factor at the end – and they get it. To enjoy the novel fully you need to embrace the crime/horror narrative, sit back and enjoy the disturbing but enjoyable ride. For some readers this may be testing and in The Drift the author is pushing her own out-there boundaries a little further.

If you love the macabre or tales of the unexpected, you’ll have a ball. What we wind up with is a novel like The Retreat by Sarah Pearce or Shiver by Allie Reynolds but on hallucinogenic steroids. The breakneck pace and echoes of our recent troubles with viruses in the real world will resonate with many. It’s engaging fun, but do not expect down-the-line crime fiction here.

Critics Think Tom Brady’s 80 For Brady Movie Is OK, But The Fans Seem To Be Loving It
Jeanie Buss Guests On The Simonetta Lein Show On SLTV
Why AMD is faring much better than Intel in the same tough economy
Jury finds Musk, Tesla not liable in securities fraud trial following ‘funding secured’ tweets
Future industrial action ‘will be even bigger’ if ministers do not act, union boss warns