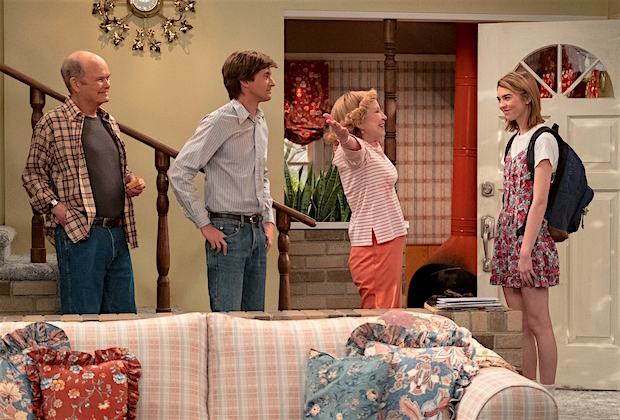 Let me save you some time: If you’re old enough to actually remember the ’90s, then That ’90s Show probably isn’t for you. Netflix is trying to recapture the retro magic of That ’70s Show with an all-new reboot — they’re calling it a “sequel series,” but really, it’s a reboot — with suburban parents Red and Kitty Forman enduring a new generation of unruly teens. But That ’90s Show (debuting today; I’ve seen the first three episodes) is an uninspired buzzkill: half tired nostalgia tour and half mediocre retread. 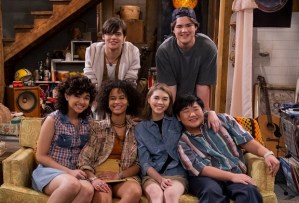 It is disappointing, because That ’70s Show never won a bunch of Emmys, but it was a perfectly good little sitcom, thanks to a cast full of future stars who had instant chemistry together. That kind of chemistry is a tricky thing to pull off, though, and That ’90s Show is a perfect example of just how tricky it can be. The show’s young cast is just not as compelling as the originals, and the weak writing here doesn’t do them any favors, either.

The premiere kicks off in 1995 over the July 4th weekend, with Eric and Donna’s awkward teen daughter Leia (Callie Haverda) coming to visit Kitty and Red, who still live in the same house in Point Place, Wisconsin. While she’s there, Leia befriends Gwen (Ashley Aufderheide), the cool alt-rock girl next door, and also catches the eye of Kelso and Jackie’s dopey son Jay (Mace Coronel). (Yes, Kelso and Jackie are back together in the ’90s — and getting remarried for the second time.) Leia decides to stick around and hang out with her new friends for the whole summer… and take advantage of her grandparents’ basement, which is still a pretty awesome hangout spot. 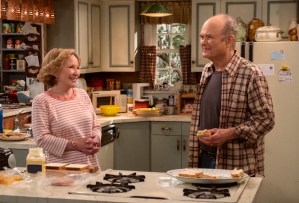 If you were tuning in hoping to reconnect with your That ’70s Show favorites, though, don’t bother. Most of the original cast members do pop up here and there, but only for brief cameos, and while some actually put in an effort, others are just going through the motions. Kurtwood Smith is in his grumpy, dumbass-hating wheelhouse as Red, and Debra Jo Rupp is still as cute and clueless as ever as Kitty, but they’re mostly confined to the background while the new kids take center stage.

That ’90s Show never lets you forget it’s set in the ’90s, either, with the characters self-consciously name-checking trends from A (Alanis) to Z (Zimas), instead of just existing in that era. (Having lived through the ’90s myself, I can confirm that we didn’t loudly announce it every time we were doing something quintessentially ’90s.) At the same time, the show has a distinctly modern sensibility that doesn’t fit the era at all. Reyn Doi is charming as Leia’s friend Ozzie, but it’s very hard to believe that a gay Asian teen in 1995 in suburban Wisconsin would be thinking about coming out to anyone — let alone his new friend’s grandmother.

If it won’t appeal to That ’70s Show fans, maybe That ’90s Show will find a following among younger viewers — but given the lame punchlines and clumsily manufactured storylines, I doubt it. (Is it as bad as That ’80s Show, which infamously bombed after just one season on Fox? I couldn’t tell you, because I never watched it, and neither did you.) It actually feels like a run-of-the-mill network sitcom from the 1990s, with its brightly lit sets and overly broad performances mugging for laughs from the studio audience. So in that way, That ’90s Show is a throwback… just not the kind of throwback we wanted.

THE TVLINE BOTTOM LINE: With tired punchlines and a new cast that lacks the easy charm of the originals, Netflix’s That ’90s Show is a total buzzkill.