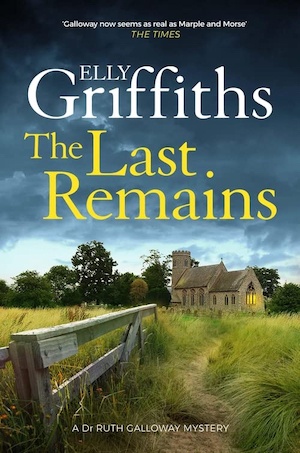 We love it when our news column contains some big names that we know and love alongside new crime authors to introduce to our readers. And that’s how it is this week as we have one of the biggest names in British crime fiction, Elly Griffiths, potentially heralding the end of her immensely popular Ruth Galloway series, alongside the Brazilian author Simone Campos and the American author AF Carter, both of whom we meet for the first time. Also in the mix – a new domestic noir novel by Louise Candlish and the UK release of Tom Mead’s Death and the Conjuror.

The Last Remains by Elly Griffiths

31 January is when Elly Griffiths fans can get their hands on what may well be the last in the series featuring forensic archaeologist Dr Ruth Galloway and her gruff, northern, on/off lover DCI Harry Nelson. As The Last Remains opens, Ruth is dealing with proposals that could close her university department when she is called to Kings Lynn, Norfolk, where human bones have been unearthed in a cafe renovation. But this skeleton is modern – and when its identity is revealed, series regular Cathbad looks like a prime suspect. Ruth and Nelson are forced to finally confront their feelings for each other as they desperately work to exonerate their friend.
Order now on Amazon or Bookshop.org

The Only Suspect by Louise Candlish

Alex is a quiet sort, the kind who likes to keep himself to himself. He lives with his wife Beth in the leafy suburb of Silver Vale and is an all-round nice guy and good neighbour. Until the landscaping team starts work on a nature trail on an old, disused site – then Alex changes. Now he’s always watching. Questioning. Struggling to hide his dread… As the work progresses, a secret threatens to surface from years ago, back when Alex was in his 20s and got entangled with a seductive young woman called Marina, who threw both of their lives into turmoil. An enticing slice of domestic noir, The Only Suspect by Louise Candlish is out on 2 February.
Order now on Amazon or Bookshop.org

Nothing Can Hurt You Now by Simone Campos

The greatly anticipated Nothing Can Hurt You Now is the first novel by Brazilian author Simone Campos to be translated into English and it’s out on 2 February. It is set in São Paulo, where a model called Viviana goes missing, much to the consternation of her sister Lucinda, a Rio-based TV producer. Lucinda suspects foul play, and with the help of their friend Graziane she drops everything to track Viviana down. Could she have been kidnapped? A cryptic text seems to suggest so – but with the police dragging their heels it is up to Lucinda and Graziane to uncover the truth.
Order now on Amazon or Bookshop.org

The Hostage by AF Carter

There’s good news for the depressed Rust Belt town of Baxter – it looks like a new Nissan plant is moving in, bringing with it jobs and renewed hope. But first impressions count, and Captain Delia Mariola has been busy cleaning up the crime-addled city ever since the deal was announced. Then the 15-year-old daughter of the lead bidder on the construction project suddenly disappears, targeted by a professional kidnapping ring. But young Elizabeth is no ordinary teenager and soon she has devised a way to send cryptic messages to those who love her back down the highway in Baxter. Trouble is, they’re in code – and it’s up to Delia to crack it and bring the girl home unscathed. The Hostage by AF Carter is out 2 February.
Order now on Amazon

Death and the Conjuror by Tom Mead

After creating a buzz upon its release in the US, as if by magic Tom Mead’s debut novel Death and the Conjuror arrives for UK readers on 2 February. It’s a Golden Age-style mystery, set in London in the mid-1930s and featuring Joseph Spector, a retired music hall conjuror with a taste for the macabre and a knack for explaining the seemingly inexplicable. He’ll need those skills to puzzle his way through a locked room mystery after eminent psychologist Dr Anselm Rees is found with his throat cut inside his fully secured office. Meanwhile, Scotland Yard detective George Flint has a second locked room mystery to solve when a lift operator is killed inside his tiny place of work…
Order now on Amazon or Bookshop.org